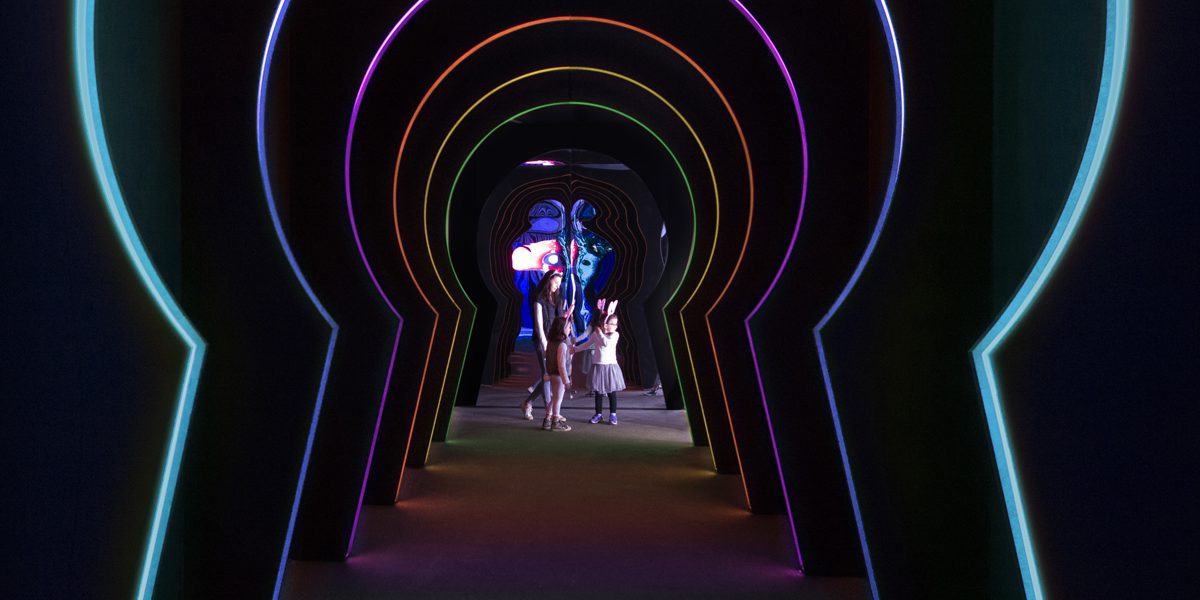 Developed by Melbourne-based Grande Exhibitions, ‘The Adventures of Alice’ is a touring exhibition like no other. It’s a unique, high-tech journey into one of the world’s most timeless and best-loved stories on a scale like never before: Lewis Carroll’s ‘Alice’s Adventures in Wonderland’ springs to life using Grande Exhibitions’ state-of-the-art SENSORY4™ technology, exquisite animation, a cinematic audio score and engaging narration by the legendary Sir John Gielgud.

Last December the exhibition had its world premiere in Rome, Italy, where it now resides.

The experience places the visitors within a super large format multimedia environment, as they journey with Alice through her adventures in Wonderland in an immersive storytelling experience. Across the entire exhibition there are 37 x projectors, 29 x separate screens, 54m of blended projection and three separate PA systems, with full synchronisation across all systems running in a 60minute automated loop.

The lighting was designed by Craig Smith, Project Manager at Grande Exhibitions, who uses the lighting to enhance the immersive experience within the main projection gallery.

“By utilising custom gobos and a colour pallet that follows the main animation, we are able transform the entire space into a mixed media immersive space,” explained Craig. “Lighting is also used throughout the exhibition both incorporated into props and set pieces, as well as being used as a method to pull the visitor through the various spaces.”

Craig reported that the RUSH MH1 came out on top in a few areas particularly ‘price vs features’ which was the initial draw card. However, given that he works with an international market, in various types of venues and structures, fixture weight, operating voltage, parts and service options become major considerations.

“All of which the RUSH MH1 exceeds at!” he exclaimed. “They have performed exceptionally well, the entire experience from install, to programming, to show has been smooth and they haven’t skipped a beat.”

The ShowPro equipment takes care of all the prop and set lighting requirements, with many of the fixtures being built into the props and set pieces. According to Craig, every piece of equipment has been selected for a particular task or requirement and every item has delivered what was promised. Craig was particularly impressed with the ShowPro LED Sunstrips and LED tape saying that they are great fixtures.

“We needed to light a walk-through set piece based on Alice falling through the rabbit hole,” he added. “I wanted an LED bar fixture with a warm colour temperature and a narrow beam to back light the printed walls. The Sunstrip was perfect for this. The warmth of the colour temperature helped reinforce an underground/cave atmosphere. Also, having the ability to control each cell made it possible to get a bit of movement and a flicker effect that gives a feeling of being in candle light.

“The ShowPro LED tape and controllers have been great to work with too. We built a series of giant keyhole set pieces that needed a LED Tape solution to mount into the frames. The concern was finding something that would handle backlighting an acrylic diffuser without losing brightness or getting hotspots. Both the tape and the controllers have performed well, giving a great result.”

For control, Craig chose an MA Lighting dot2 Core which he said exceeded expectations in performance and ease of use.

“I wanted to go with MA as I knew we would get quality and have access to operators all over the globe,” he commented. “However once I had a look at the dot2 is was obvious it was our best option.

The show runs off LTC and I needed a platform that could run day after day unmanaged but also have a programmer that would allow simple position updates from install to install – without the need for any major reprogramming.”