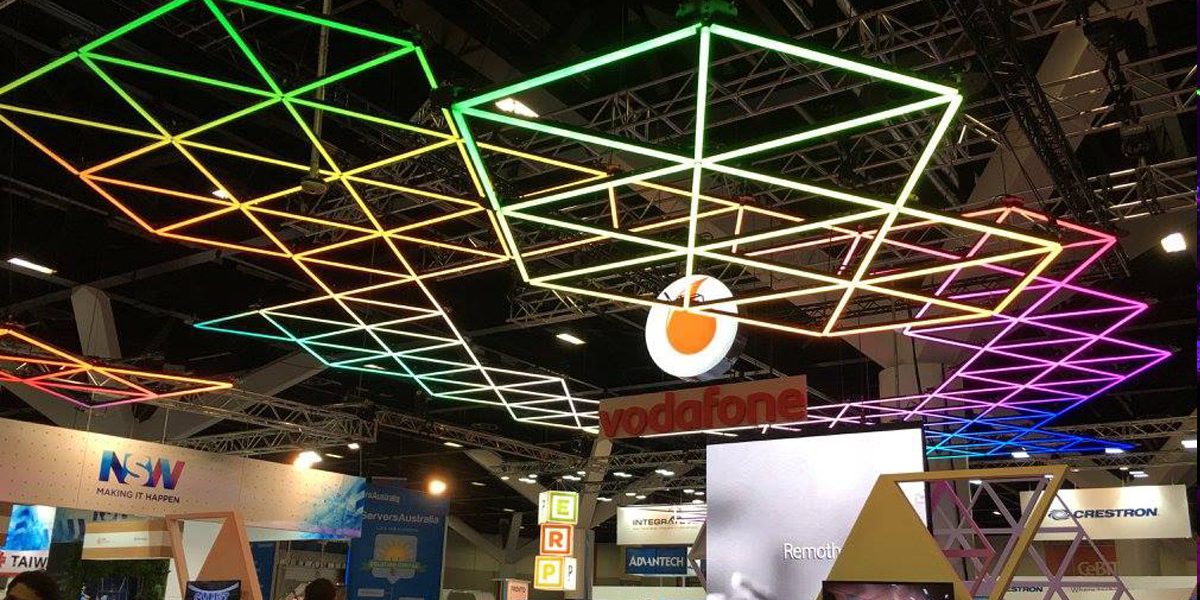 Innovative Production Services (IPS) has added 200 x Martin Professional VDO Sceptron 20 linear outdoor-rated LED video fixtures to their inventory. With its 20 mm pixel pitch and an extensive range of optical accessories for a wide variety of looks, the VDO Sceptron 20 opens up a wide range of creative possibilities.
“I had been searching for something different for a while and when two projects came along that would be ideal for VDO Sceptrons, I had the perfect excuse to buy some!” remarked Jeremy Koch, Director of Innovative.
One of these events was the Vodafone stand at CeBIT Australia held at the ICC Sydney, a premier occasion to launch such a product to the corporate display world.
“The client came to me looking for ideas to make the stand more dynamic and interesting,” said Jeremy. “They had a triangle design already happening with a roof of triangle shaped timber edge-lit with LED tape proposed. It was just going to be ‘on’ with no colour changing or chases ….. I knew then it was time to have a good look at the VDO Sceptrons!”
Show Technology’s Mike Gearin demonstrated the VDO Sceptrons to Jeremy who straightaway knew that they were the ideal solution. The client was bowled over by them and Jeremy was given the thumbs up!
Innovative custom designed the rigging and brackets for the Vodafone system with Show Technology assisting with a cabling plan. The integrated power and data cabling of the VDO Sceptron allows for long daisy-chains with many fixtures per cable-run, while the power supply can be located backstage for a clean setup avoiding messy cabling and several driver boxes.
The Vodaphone stand featured a total of 280 x VDO Sceptrons, with 50 sub-hired from MPH and 30 on demo from Show Technology.
“When it came to how it would all look, we were stepping into the unknown,” admitted Jeremy. “But once it was flown and working, everyone was blown away by it especially as it was like nothing anyone had seen before.”
Jeremy spent time adding content, both stock and downloaded, commenting that while content may look great on the computer screen it does not necessarily look good on the output device and vica versa.
A few days after CeBIT, IPS had to deliver some creative for TEDxSydney, the leading platform for the propagation of Australian ideas, creativity and innovation to the rest of the world. Jeremy said they had been struggling for an idea for the stage backdrop and given how well the Vodafone project had looked, he decided to push for the VDO Sceptrons to be the backdrop.
“Initially, some of the creative team were against the idea saying it looked too geometric and bland in the renders,” began Jeremy. “However in the end they translated really well onto camera and everyone was very impressed.”
Bright and fully calibrated for optimal consistency, the VDO Sceptron 20 is driven by the Martin P3 System Controller family for easy configuration, mapping and setup, and is also backwards compatible with DMX for smaller setups.
Control set up was similar at both of the Innovative designed events with the VDO Sceptrons driven by the Martin P3 System Controller into which was fed coolux Pandora’s Box. The Vodafone stand was all programmed into Pandora’s Box in the timeline but as TEDxSydney was a live show it was controlled by MA Lighting International MA2.