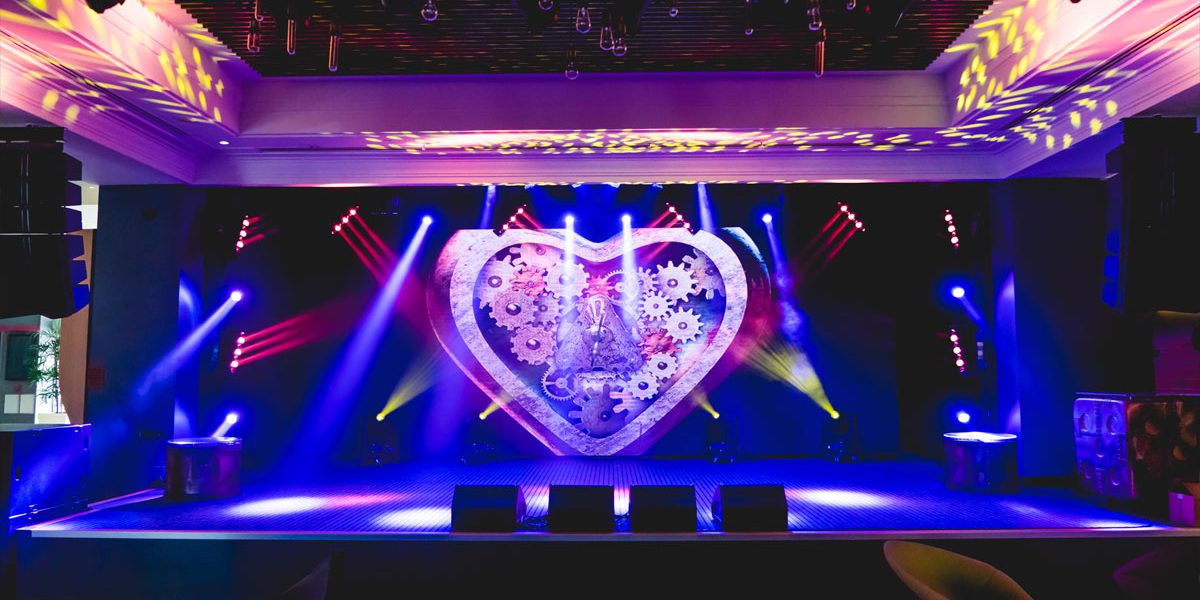 The Reef Hotel Casino’s BAR36 is a sophisticated venue, combining high end sound design with state of the art lighting and vision system, setting the stage for an atmosphere unlike anything else in Cairns.
BAR36 offers five nights of live acoustic acts every week and then on Friday and Saturday nights, things get more upbeat with a full band, lighting effects and a few more decibels.
Earlier this year, Cairns-based Jam Productions were tasked with redesigning the stage lighting as well as providing the fixtures and creating the content for the large LED screen that forms a backdrop to the stage. The stage is quite small, 4.5 metres deep and 9 metres wide, and so fixture choice was not simple.
Added to that, the venue wanted both an intimate stage and a big stage and so they chose to install an LED screen that, at the press of a button, rolls towards the front of the stage thus making the performance area more intimate. During the day the screen also runs promotional material from the front position.
“The screen solution was great in theory but it meant that we couldn’t place a fixture anywhere!” commented Justin Ogge, Director at Jam Productions. “We came up with lots of ideas to try get around the problem. Also, when the screen is in forward mode, the client didn’t want to be able to see any light fixtures or truss.”
Justin thought of the Ayrton range of products that are low profile but still deliver a lot of bang and were ideal for fixing to the top of the LED screen. Along the top of the screen are four Ayrton MagicBlade R and six MagicDot R fixtures.
“We designed a bracket that we could hook over the back of the screen rigging bar which meant the lights sat really nicely on top of the rigging bar,” added Justin. “Downstage we designed two brackets that are bolted to the wall, you pull the pin out of the top and the bracket drops down so you can easily move the fixtures around. They’re very close to the wall and don’t obstruct the screen, in fact there’s only 200mm between the screen and the wall.”
Usually there are two MagicDot R and two MagicBlade R fixtures on each side bar and despite specifying the Ayrton products himself, Justin was still shocked at just how good they were!!
“I can’t think of any other fixture we could have done this with to achieve the same results,” he said. “The size of the products and what you get out of them is phenomenal. They were perfect for what we were trying to achieve in such a small space and make it look so much bigger than what is really is. Plus wherever they use the screen they can use the whole lighting rig.”
Justin remarked that he very much likes the pastel colours he can achieve with the Ayrton fixtures, colours that are very difficult to achieve with most LED fixtures.
“Even the golds are really good in them,” he added. “I was surprised how good the gold colour was because traditionally you can’t get a great gold out of a LED fixture.”
Four Martin Professional RUSH MH1 Profile Plus fixtures are placed on the floor of the stage whilst out in the room there are four lighting bars with each bar hosting a Martin RUSH MH6 for dance floor wash. The front bar also has four Martin RUSH PAR 2 RGBW Zoom fixtures, chosen for their zoom capabilities in a venue with such a low roof. Justin reports that he was amazed by these and that they easily wash the entire stage. Also on the bars are four ShowPro LED Profile HP’s which are so bright, Justin has limited them in the console so that they can’t run above 50%!
“We don’t need them any brighter than that!” he said. “I love how really even their coverage is with no hotspots.”
A JEM Hazer Pro supplies atmospherics. Justin took an intuitive approach to programming as there are no trained staff on duty for most shows so the lighting needed to be easy to operate and understand.