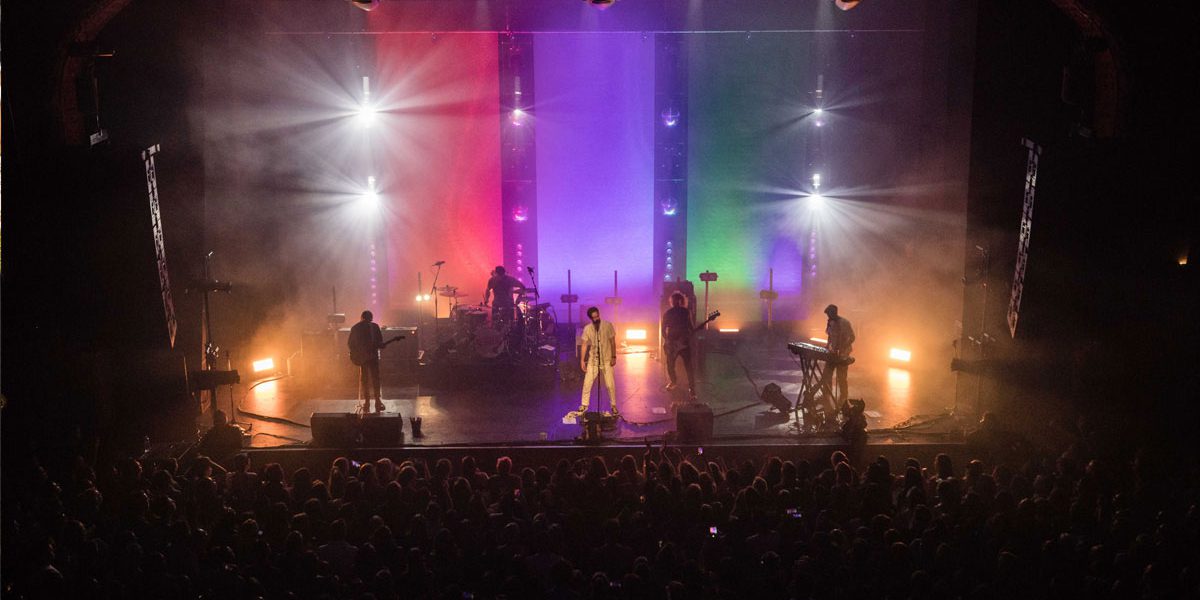 In celebration of their third studio album LO LA RU, Menangle five-piece The Rubens performed for audiences across the country last November and December. The tour saw the alt-rock favourites delight fans in Brisbane, Sydney, Adelaide, Fremantle and Melbourne as well as eight regional cities across Australia.

Eight Mistral-S fixtures, hung on four ladders along with eight mirror balls beneath each one, were used for either beam looks onto the mirror balls to do big mirror ball bounces or as the back spot for the show. However, for the first half of the show these are all hidden by a large Rubens silk backdrop to be revealed by a spectacular kabuki drop in song 10.

“Everything about the Mistral-S impressed me,” said Tim. “They are so bright but it’s the colour mixing that is most impressive. The deep colours you can pull out of them, without taking away too much brightness, is incredible. In fact, I was just dumbfounded on how a feature rich and punchy light could be contained in such a small lightweight package.”

The Mistral-S has a 13-lens proprietary optical system which delivers an 8:1 zoom ratio with a zoom range of 6.7° to 53°. The optics, equipped with a 119mm frontal lens, can achieve an extremely uniform flat beam that can render images perfectly in all conditions and at any beam angle.

MISTRAL-S is also equipped with a new LED module, delivering powerful metallic white light with record-breaking output of 17,500 lumens and a colour temperature of 6,500K.

When the tour reached The Forum in Melbourne, Tim got to use SWS’ new Ayrton Bora-S wash luminaire with three located on the downstage truss to do backdrop framing during the second set and backdrop wash for the first set.

The Rubens new album features three flags so for the second part of the set, three mesh drops 2.4m x 6m are revealed between the ladders and the three Bora-S on the front truss are used to light them.

South West Solutions were the first production house to get their hands on the MISTRAL-S in Melbourne and the first in Australia to get the BORA-S. They’re very pleased to see their new gear on rigs so soon!

“We used them to frame out onto the drops and then drop in a gobo to do textured breakups,” mentioned Tim. “They’re an awesome light and the framing is spot on.”

Bora-S features an 8:1 zoom ratio for a wide zoom range from 8° to 64°. The optics produces an extremely uniform flat beam with no hot spot, ensuring a perfectly homogeneous colour mix regardless of the colour combination selected.

The rest of the rig was an old school, rock’n’roll conventional light show with 1.2K Fresnels downstage of each band member to achieve silhouette wash effect onto the two backdrops. A total of 48 2-lites were deployed, with some at the bottom of the ladder system.