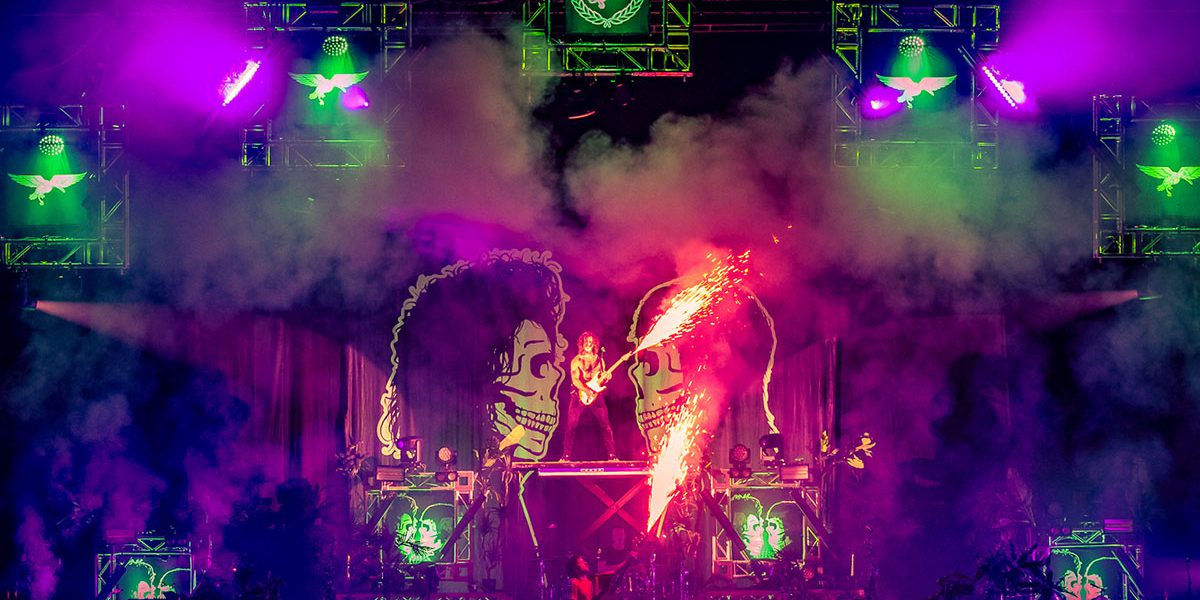 “Until this tour, Peking Duk has always had a heavy video show and the lighting brief would be to match the video content,” commented lighting designer Nicholas Beachen, who hadn’t toured with the band for a couple of years. “However this time they came to design meetings proposing that we use no video at all so the brief was to create an environment on stage that wouldn’t be lacking without video.”

Consequently Nicholas decided to use a striking backdrop and five flown banners encased in truss pods.

“I have used banners before in other designs as I find them to be a very effective way to get the artist’s branding on stage without video,” he said. “My initial design didn’t have banners inside the truss pods as my first idea was to have something shoot through these. However I am very happy with the way the banners on the pods turned out. They were really affordable to make, so we were able to create a few variations of the tour branding and also have the band logo kicking around. We mix and match them as we see fit for each venue creating unique experiences for each audience, but with the same theme.”

This tour design is scalable from the arena show [as seen in these photos] right down to The Great Northern pub in Byron where we were working with only two truss pods on the floor.

“Somehow I managed to keep it looking the same the whole way along the tour and I was pretty happy with that,” added Nicholas. “I have nine Claypaky B-EYE 20s to light up the banners and I like the way their lens look through the banner too.”

“These are amazing little fixtures and I’d say they are my new favourite profile moving light!” remarked Nicholas. “They’re small, punchy, have great looking gobos and colours, plus fast functions across the board. I can’t think of anything bad to say about them.”

“Show Technology’s Brandon Butler brought a Mistral-S to Colourblind a few weeks back for a demo and for some reason I wasn’t hugely on board with them at first, however after using them on this tour I’ve changed my mind and really, really love them! Coming into this tour, Matt Downs had been talking these units up big time and he was right, they’re great.”

A total of 27 x Martin MAC Auras were used for colour wash with Nicholas commenting that “you can’t beat an Aura, and that they’ve been a solid work horse for a while now. Added to that were nine Martin Atomic LED Strobes, Nicholas’ favourite LED strobes.

“They’re just so bright, they never fail to punch through the biggest looks and they have that classic atomic look, I love them,” he said.

Another product that made Nicholas’ design very effective was the 33 x ShowPRO Nitec Blinders, even though he admits that he was apprehensive about LED blinders at first.

“I’ve learnt to love the options they provide and these little blinders are great,” he remarked. “The Nitec blinders have the classic blinder look too, in fact we even built some 8lites out of four of them!” Control was an MA Lighting grandMA2 light for main with a grandMA2 fullsize for backup, simply as this was what SWS had available at the time, with Nicholas adding that the light sized console was definitely enough.

The whole show was programmed to timecode per song, taking LTC timecode into the console via FOH audio using a 3pin and a Mif4 to clean and read the signal.