Claypaky, Studio Due and ShowPRO Create a Magical AURA 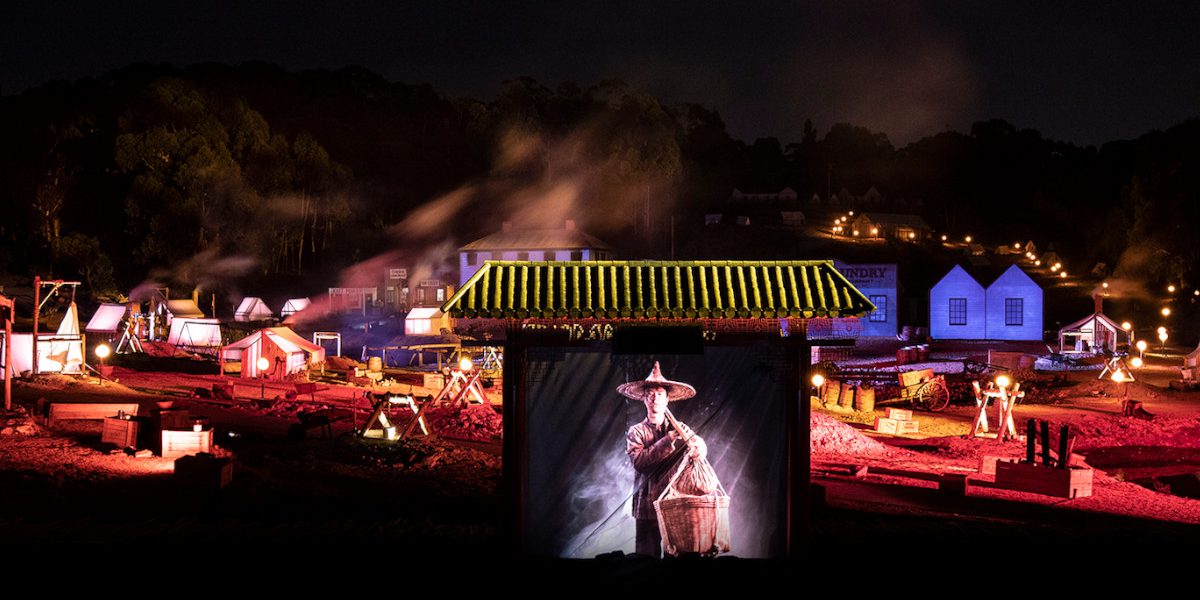 Over 64 acres, hundreds of stunning projections create an immersive storytelling experience that transports you back in time. The Wadawurrung creation story is told with projections on a magnificent lake, gunfights and protests erupt under the night sky, and the gold rush is brought to life as never before.

Rohan Thornton was bought in to design the lighting and special effects for this immense project. With projection the major element in the show, Rohan had to ensure that none of the lighting overpowered the projections.

“Ultimately the projection is the star and we just had to enhance that,” he explained. “Creatively, the style and type of projection really set our direction. Also, we didn’t want a moving light show as it’s a fairly conservative show dealing with some serious topics. It needed to be subtle yet a substantial difference from the previous show.”

Environmental concerns and maintenance costs were high on the agenda when Rohan chose eight Claypaky Axcor Profile 900 featuring the best in modern technology in every parameter.

“Let’s face it, Claypaky have never made a bad fixture in the entire time that they have existed!” he declared. “The guys at Show Technology suggested the Axcor Profile 900 so I had a look at it and loved it. However we still did a shootout with a range of other LED Profiles and the Axcor Profile 900 clearly outshone everything. It has amazing colour rendition allowing great subtleness and what was great in that particular terrain, was the earthiness we could achieve with the colour. Optically they were brilliant too; we were getting sharp gobos and sharp framing at 250 metres. It was simply a really good fixture that ticked every box.”

The previous show was solely analogue and Rohan lost a few positions to place lights so versatility of the fixture became a key requirement.

The Axcor Profile 900s are predominantly used to direct the audience’s focus to particular zones within the large area thus becoming a key light that supplements the script and reinforces the story. This high wattage moving head LED spotlight was also used to light up the tree line and with only eight fixtures, close to 500 metres of tree line is covered.

Eight Claypaky A.Leda K-EYE K20 were rigged in the same hanging position so they could provide the basis for the Axcor’s effects, working well in tandem. This exclusive Claypaky device provides a very wide colour range with excellent colour spectrum coverage.

“Sometimes we wanted to add a layer of colour or texture underneath what the Axcors were doing and they were great for that,” said Rohan. “There are some scenes using only the K-EYEs highlighting the gravel and the texture of the ground but the key point is how well the two fixtures work together. I haven’t see two fixtures work so well together since the days of the VL5 and VL6! And again, they have proven to be extraordinarily reliable.”

The fixtures are located within a custom-built tower which has natural ventilation and it was important that they are dust sealed as dust is the main enemy on the site.

Four of Studio Due’s new IP67 CITYBEAM LED SL84 are used to highlight the hero moment at the end of the show where they uplight the poppet-head as it raises out of the ground. Two more Studio Due City Beams are used to highlight the raising of the Eureka flag, the other hero moment in the show. This long distance outdoor colour changer with single LEDs delivers a powerful beam of light even narrower than the traditional Citybeam LED to reach impressive heights.

A total of 36 ShowPRO LED FusionPAR Q XII are scattered around the site to subtly highlight various architectural elements. Using the W-DMX function on this outdoor-rated quad-colour LED washlight gave the team a lot of flexibility.

“We could easily move them around and plonk them where we found gaps during the focus sessions,” said Rohan. “The landscape was ever changing; we had massive amounts of rain during the winter months and we discovered that water would flow in particular directions that changed the actual architecture of the area. It wasn’t a well-documented site before we moved in.”

Twenty-four ShowPRO LED PixPar 3 were used in a similar manner with Rohan saying that the zoom function really helped to light up some tents and some select areas. The IP65-rated RGBW Zoom PixPar3 delivers a powerful tight beam or a super flat wash thanks to the DMX controlled motorised zoom in a compact diecast IP rated housing.

As the previous show utilized an MA Lighting MA2 onPC it was decided to keep that control system as it had been reliable and the Sovereign Hill crew were familiar with the platform.

“It’s a rock-solid platform and it certainly wasn’t old, so as budgets were getting a bit tight we decided to refurbish the computers which Show Technology did for us,” commented Rohan. “We programmed on an MA2 light and then networked all the systems together.”

Rohan was so pleased with the eleven ShowPRO Artnode Pro 8 he specified for the project that he bought two more to install into a Channel 7 studio project he was working on!! Artnode Pro 8 is a versatile rack mountable Artnet to DMX adapter with an integrated optical DMX splitter and Rohan remarked that they are very good value for money.