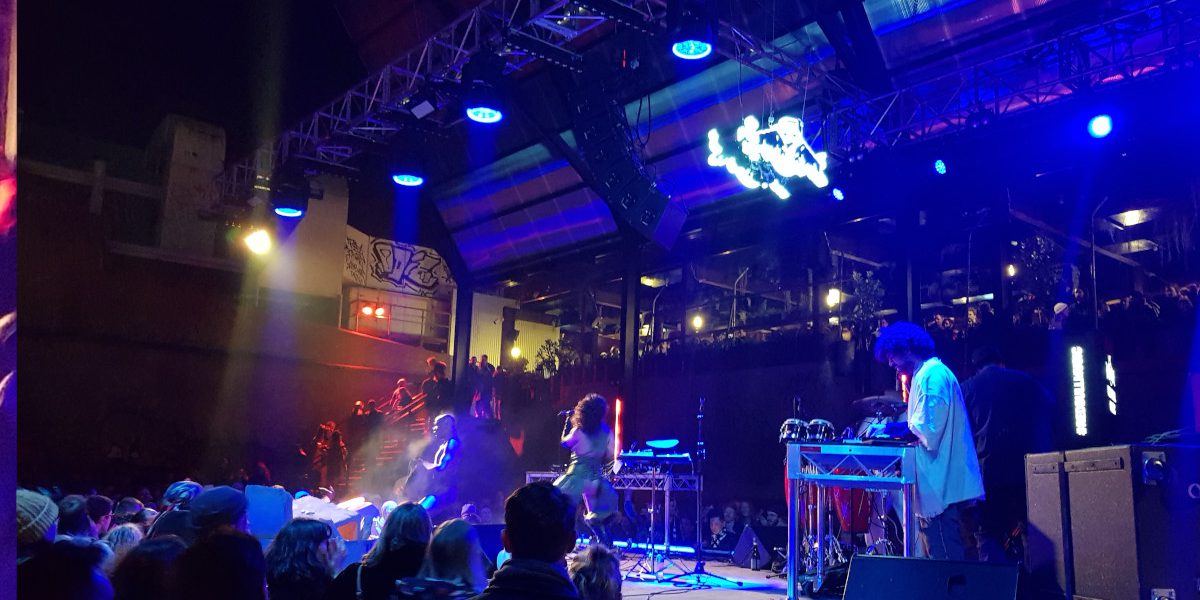 Occupying almost an entire city block, Hobart’s new cultural precinct represents a significant partnership between private developers and DarkLab, a subsidiary of the Museum of Old and New Art.

The first stage of the development, In The Hanging Garden, opened as part of the annual winter festival Dark Mofo. In its initial phase, In the Hanging Garden consists of an extensive urban beer garden and outdoor dining area and at the centre of the site, and providing some protection from the elements, is a dramatically lit 18-metre-tall skeleton steel Cathedral shelter, around which are split-level spaces filled with rotating food and beverage offerings in converted shipping containers.

During Dark Mofo the cathedral hosted Night Mass with a variety of acts bravely playing through the cold winter nights. Hobart-based Alive Technologies supplied audio and lighting for the space.

“The space is about 30 metres long and 12 metres wide with a really steep pitch roof on it,” explained Colin Boucher, Alive’s Project Manager. “The roof is clear Perspex and there are no sides to the venue so we added some rigging points either side so we could run trusses down the full length of the space.”

Alive had been looking for the ideal IP65 rated LED washlight for some time and when the PROLIGHTS Panorama IP WBX hit the market, they began to get a little excited. Panorama IP WBX is a stunning IP65 high-output, LED wash light with a pixel ring designed to bring the workhorse LED washlight to outdoor events. Featuring 19 of Osrams new 40W RGBW Ostar LEDs, it delivers a massive output with a huge colour range and an extensive toolkit of effects.

“We looked at some other IP rated LED wash lights but they didn’t deliver the output that the Panoramas could,” said Colin. “We wanted an IP front wash solution that could do eye candy during the day and could also go out on festivals to be hung from the front truss and be rained upon. Every single time we need to put front wash out in the elements they end up getting destroyed. Tassie being Tassie, it always rains sideways so no matter what creative roof, top hat or dome you put on a mover they end up getting drenched.”

Alive took delivery of ten Panorama IP WBX just in time for Night Mass where they were used for specials on the stage, general room wash and for beam effects as the Panorama IP WBX offers a massive 45° to 3° to linear zoom range from wash to beam.

“We had no profiles in the rig other than what the Panoramas can do so I was using them for main beam look too,” added Colin. “Having the macros onboard and being able to break the LEDs down to single pixels with animations, gave me some dynamic looks when required.”

Individual pixel control with on-board FX generator for both LEDs and pixel ring allows for fast and precise effects.

Also on the gig was Alive’s MA Lighting grandMA3 console, which was purchased a couple of months ago, and Colin has enjoyed getting familiar with the surface.

“The muscle memory is where it should be now and I’d be reluctant to go back to a grandMA2 now!” he said. “The feel of it is great. It took me a little while to get used to the keys and initially I didn’t like them. Now I think they’re fantastic! I’m sure once we get the MA3 software it will make sense as to why a lot of the features have been moved to where they are.”