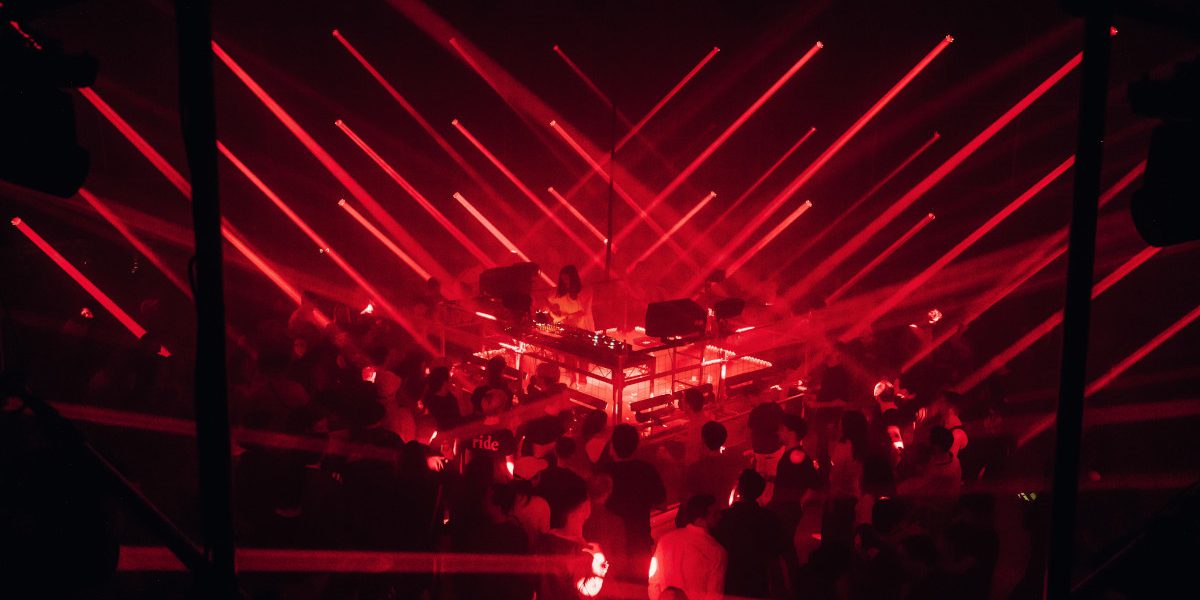 Vivid Sydney commissioned Sam Whiteside, a visual art designer behind the massively successful Soft Centre Festival, to design a site-specific lighting rig for a run of shows at The Studio, a key venue in this year’s annual festival.

The Studio lies hidden beneath the iconic Sydney Opera House and had been converted into a visually immersive space to host some of the world’s leading underground electronic artists.

Sam created a unique lighting design, distinctively made for The Studio, where light would emanate from every corner of the room, to rain down onto the discerning audience.

To bring Sam’s design to life, he engaged David Fairless from Colourblind, to be the programmer and operator for the event. After reviewing the proposed lighting rig for the room, David wasted no time getting to work on the project.

Instead of a single front-facing stage, Sam formed a composition of fixtures around the entire room, to wrap around the audience. The aim of the design was to capitalise on every component in the room to exhibit an omni-directional lighting rig. Having such an encompassing lighting rig gave David freedom to program a show not limited to the confines of a standard stage and overhead truss.

A highlight of the programming process was exerting the density of fixtures to create unconventional shapes and vortexes above the crowd. By pairing fixtures that were parallel with one another across the room, an intensity chase was applied to the beams from either fixture to create a single robust beam. This effect was then multiplied by every fixture in the space to create layered grids leading up to the ceiling of the room. Sam and David paired the gobo wheel of the fixture with some ultra-pan and tilt settings to be able to match the Claypaky Sharpys together so that the single beam look was flawless, without any other light spilling outside of the beam.

David bit-mapped the rig so that there were interchangeable intensity effect looks on top of the single beams. As the events ran over two weekends, Dave was able to develop initial programmed effects over the duration of the exhibition into a fully realised lighting performance.

Sam challenged David by requesting unique movement forms to be created that reflected in the programming.

“It was the first time I was given a four-wall design,” said David. “I’ve worked with Sam on previous tours and installations before, but it was the first time bringing his sole vision to life. It was a new endeavour to program with the purpose of showcasing the design of the room and to not focus on a stage show. I loved the creative process behind the project and would really like to program a rig like that again where the emphasis was on the cohesive match between sound, space, and light.”

The installation utilized 60 x Claypaky Sharpy, as well as 4 x Sharpy Lasers from Oracle Lasers and a 6w Laser. It ran between May and June and saw acts A Guy Called Gerald, Laurel Halo, Nye In The Park, John Talabot, and Moritz VO come through the room.

This article first appeared in the July edition of CX Magazine