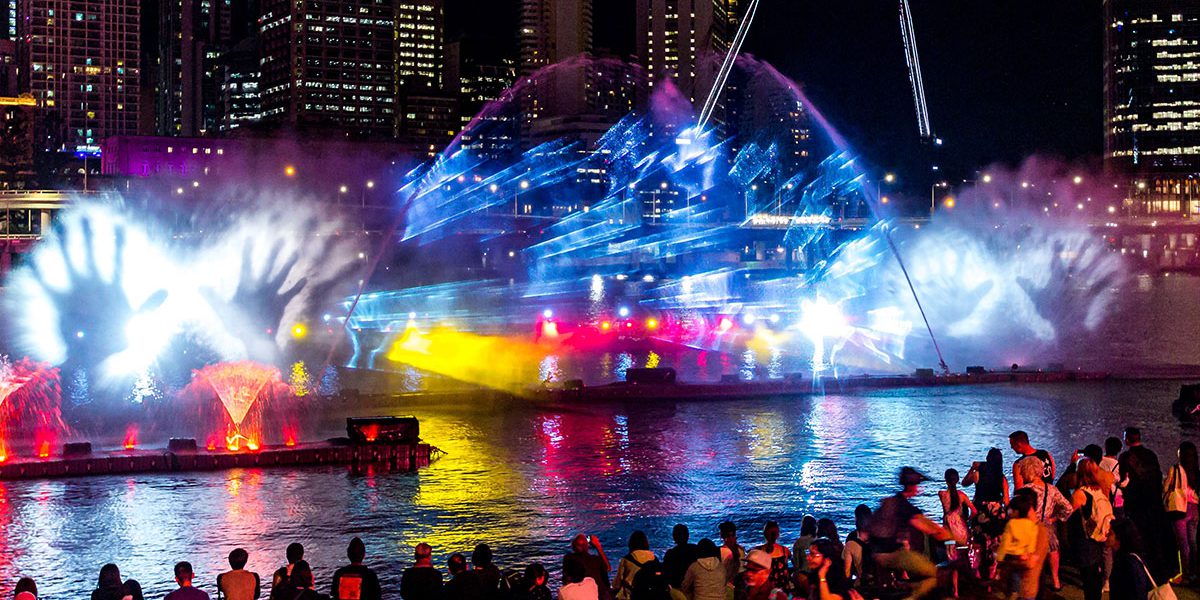 A highlight of last month’s Brisbane Festival was the free illumination spectacle River of Light held on the Brisbane River.

The 10-minute show ran three times a night for the duration of the Festival and included dynamic jets, giant spirals of water, full-colour lighting, rainbow-coloured lasers and incredible story telling via projections.

Following the phenomenal success of the 2018 telling of a Dreamtime creation story of the river – seen by almost 500,000 people – this new local story was again told by Yuggera and Toorbal man Shannon Ruska working with Oracle-Liquid. This year Ruska and Oracle-Liquid told the next chapter: ‘The arrival of Europeans’.

All the gear for River of Light was supplied by Oracle-Liquid except for one key piece of gear that they do not own – a projector.

“When we need video projection we usually hire the gear and of course we put that in the quote,” explained Glenn Turner, Director of Oracle-Liquid. “You’re talking anything from $80,000 – $200,000 for video projectors which often stuns the client and so we decided we had to get creative.”

On a mission to work out a way to project full colour imagery without using costly video projecters, Glenn and his team found a solution with Claypaky Scenius Profiles and glass gobos.

“Once we’ve sourced and edited the images, especially to the correct colouring for use in a lighting fixture, we get the glass gobos made,” added Glenn. “We put them in the Scenius Profile and then when we project them, we move them and use the pan and tilt, oscillate, rotate and all those functions of the lighting fixture to make it look like its moving.”

The gobos were rear projected onto the fountains which were uplit by 140 submersible LEDs.

“The reason why we have four Scenius is that they can only take six rotating gobos which makes it quite hard to create a show,” said Glenn. “We had two water screens with two Scenius projecting onto each screen and that gave us 12 gobos per water screen, which is tricky for a 10-minute show where you’re telling a story.”

Also of note were eight Claypaky Sharpys which featured Oracle-Liquid’s custom laser fixture on them. A favourite in many productions, the Sharpy Laser combines a Sharpy and a 6 watt powerful colour laser resulting in labour and logistics savings.

Control was by Oracle-Liquid’s custom fountain software which also features a visualizing system in it allowing the team to program nearly the entire show in the studio beforehand.

“Then when we get on site it’s just a case of plotting everything and adding a few bits and pieces,” said Glenn. “Before we had the visualizer, we would spend a week of long nights programming which was very tiring after you’ve spent two weeks installing the system.”

The whole effect was created by a floating rig weighing more than 25 tonnes, with music switching between styles to give the 10-minute performance pace culminating in a burst of colour and fanfare.

*First published in the October edition of CX