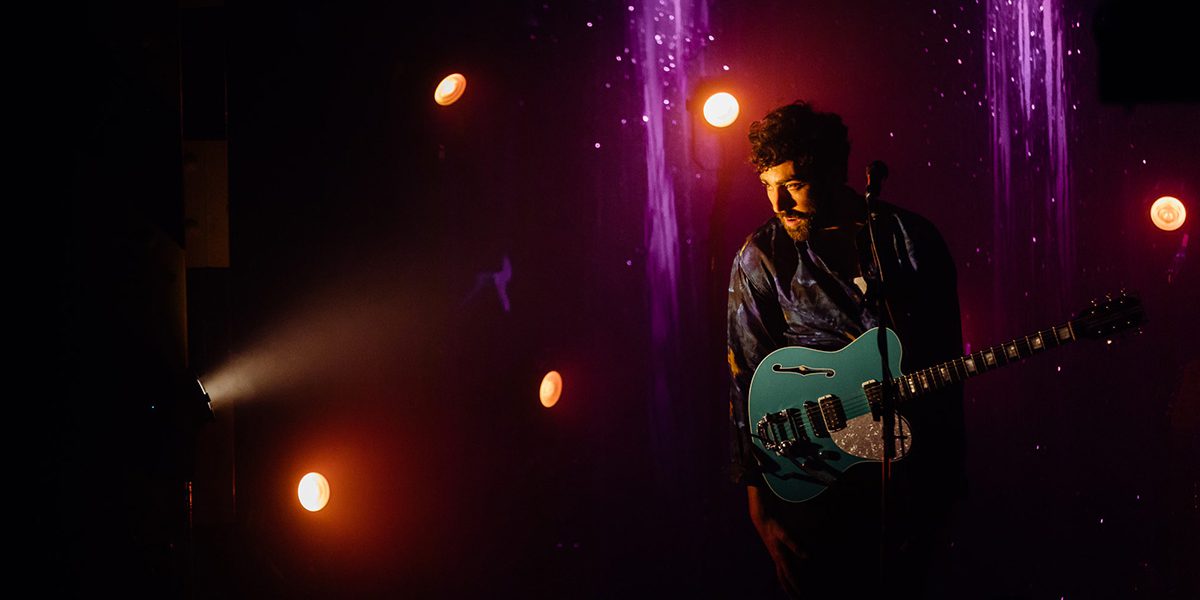 No Mono, an immersive music project by Tom Snowdon and Tom Iansek, show has been described as a sonic spiritual experience. In support of the follow-up album to 2018’s Islands part 1, imaginatively entitled Islands part 2, the band embarked on a national tour through August and September.

The Martin VDO Atomic Dot combines a compact strobe, small blinder, video-pixel and small spotlight. The combination of a video-controlled Aura backlight and a bright strobe/blinder dot in one fixture, enabled Mike great creative potential to make a big impact with audiences.

“It was a very interesting product to work with,” he began. “Originally we were just going to use some PAR16s on mic stands which could travel with us in a Pelican case. Branden Butler from Show Technology showed me the VDO Atomic Dots and I was really attracted to the fact that they come in a CLD and WRM version. The warm chip option can deliver the tungsten 27,000K blinder or PAR look which I also used for keylight.”

Once he had seen them, Mike knew he wanted the VDO Atomic Dots on this tour saying he could adapt them to any venue by stealing as many mic stands as possible from the audio department! During the tour Mike had a mixture of mic heights and never kept the same orientation or fixture height from show to show.

The mic stand attachment provided by Martin doesn’t allow you to tilt the fixture, as it’s a static accessory, however Matt Downs of SWS got creative by finding a custom mic stand solution that also allowed for the fixture to be tilted.

The fixtures’ compact design gives designers the ability to place VDO Atomic Dots just about anywhere and deploy them in larger quantities. The smart, interlocking mechanics allow multiple fixtures to be locked together into battens, arrays and creative shapes.

Mike commented that the VDO Atomic Dot’s ability to do two or three part colour pixel-map effects translated well with the band’s music.

“When you add the diffuser to the VDO Atomic Dots WRM you get swirl patterns when you do pixel effects and that translates well,” remarked Mike. “The fixture allowed us to visually translate the electronic and contemporary soundscape into the pixel mapping effects.”

For this tour, six VDO Atomic Dots, plus cable, went into a Pelican case resulting in Mike travelling with three cases as one was required for his MA Lighting MA2 command wing.

“I think Australia is begging for anything that looks interesting that you can put in a Pelican case and fly,” added Mike. “The VDO Atomic Dots are extremely robust and being IP67 they’ll be great for outdoor stages and festivals. You get some great options for different hanging orientations, clusters and I think they’re very practical for the Australian market.”

VDO Atomic Dots also feature an integrated power supply, which increases the ability to daisy-chain several fixtures together. Integrated support for P3, DMX, Art-Net and sACN eliminates the need for additional interface boxes and onboard P3 eases pixel mapping and using the product as a video controlled strobe.

Mike would like to mention Matt Downs at SWS, who owns the fixtures, and Branden Butler at Show Technology, for the swift turnaround in shipping the new VDO Atomic Dot Warm.

“We spec’d the product on Thursday, and SWS took delivery on Monday ready for their debut show,” Mike added.

Matt Downs from SWS commented “ The Atomic Dot’s size, weight and feature set was a massive drawcard to Australia’s touring market and offers LD’s some flexibility in their use; whether it be for creative pixel or subtle and discreet key lighting. it was because of this we made the decision to get the first units in the country. Everyone we have shown loves them!”