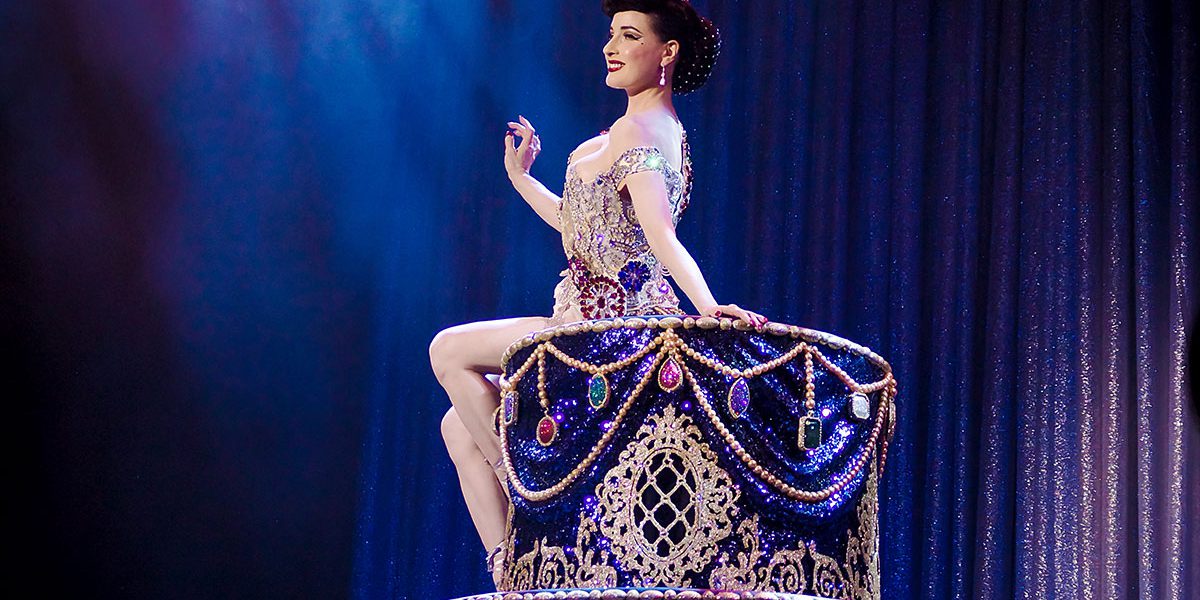 The ever-dazzling International Queen of Burlesque, Dita Von Teese, returned to Australia with her most lavish touring burlesque show ever – GLAMONATRIX.

Fans were treated to a full evening of comedy and sophisticated striptease that celebrated diverse beauty. Far from being a typical burlesque show, Dita elevates and modernizes the classic 1940’s variety show, with both male and female forms glorified in a body-positive way that inspires and uplifts.

The tour was the first outing for Phaseshift Productions’ brand new Claypaky Sharpy Plus fixtures which are capable of being both a perfect beam light and a perfect spotlight. Dita’s production manager and lighting designer, Alex Goldberg was thrilled to have the new fixtures on what was the beginning of a world tour.

“This is the type of show that provides a lighting designer with the opportunity to be an active element in the presentation itself,” commented Alex. “When you often have only one performer on stage, the lighting becomes an essential part of the show that interacts with the dancers’ performances, keeps everyone looking glamorous, and transforms the entire atmosphere to create beautiful moments together. It’s important for me to help the audience focus clearly on the performer while sculpting a beautiful stage picture.”

Aiding Alex in sculpting the stage and creating a stunning environment were nine Claypaky Sharpy Plus, which Alex describes as really impressive.

“Considering their form factor, their output is really remarkable,” he said. “I think the gobo selection has been really well manicured and provides a variety of opportunities for lighting designers, whether they’re focused on air-light or a more conventional theatrical production. There are plenty of options for a variety of situations.

“Of course, the selection of two prisms is really cool – who doesn’t love to have more tools to play with! The fact that you can combine them allows you to create some spectacular effects, not only as air-light but also projected onto a surface.”

Alex utilized this option when Dita performed her infamous Martini Glass routine, where he combined the animation wheel with the prism to create an incredible rainfall effect.

“I put in the animation wheel and radial prism wheel on a slow rotation combined with a rotating gobo, just off sharp, to get a really beautiful effect,” added Alex. “The Sharpy Plus delivers a beautiful, crisp parallel beam of white light that projects through absolutely everything and provides beautiful sculpting for a space. The Beam Reducer on the static gobo wheel really helps me achieve an intense hot spot but with the exact diameter beam required to create the desired effect.”

When Dita presented her Lipteese number (where she straddles a giant lipstick) Alex really got into using the Beam mode saying, “The Sharpy Plus really impressed me when performing in beam mode. I used this effect in the Lipteese number to provide a hypnotic, pulsating field of tight white beams that perfectly complimented the high energy of Dita’s performance.”
When deciding upon the ideal lighting fixtures for this tour, the size was very important as truck space was going to be extremely tight. Every square centimeter had to be considered and Alex’s research led him to the compact Sharpy Plus.

“I hadn’t used them before but I am pleased with their performance and what they can pull off for the size of the fixture,” he said. “The amount of features Claypaky has packed into a fixture of this size is phenomenal; impressive zoom range, two animation wheels, rotating gobo wheel, indexing gobo wheel, and two prisms! It’s an incredible feature set.”

The Claypaky Sharpy Plus is a fully-fledged hybrid light, with two independent operating modes, that weighs only 23 Kg. In Beam mode, its aerial effects stand out thanks to the unit’s extraordinary light output. In Spot mode, its light is diffused more evenly allowing you to project wonderfully uniform visual effects.