You are here:
Entertainment 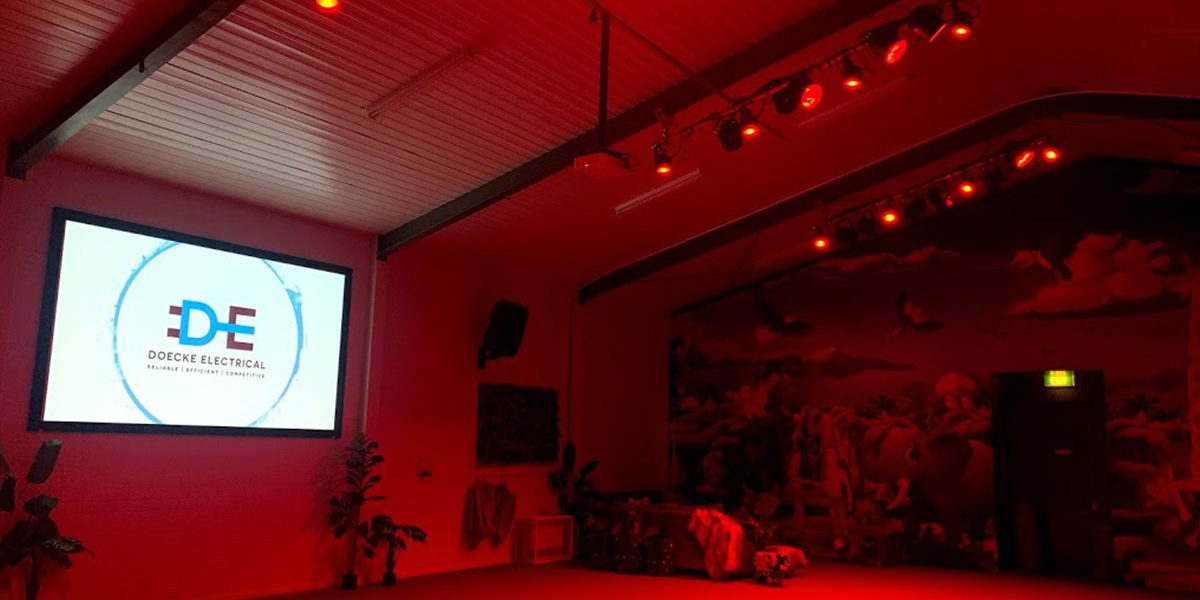 The kid’s room, resembling a barren warehouse, was the larger room and was desperately in need of a renovation to make it more enchanting to the children. Consequently, beautiful murals were painted around the room and coloured lighting was added.

“The Church wanted a couple of things, one was to have house lighting and the other was to be able to light the walls changing between red, green and blue colours,” commented Sean Mayo, Doecke Electrical’s Business Manager. “We also supplied a projector and screen as per their request.”

Four 3m single tube lighting bars from design Quintessence were suspended from the roof and these held a total of 20 x Photon 80s as house lights and 24 x first-generation ShowPRO LED PAR cans that were re-used as they were still working perfectly well.

“They were originally used in the auditorium and by all accounts, have been great,” said Sean. “The lights give full coverage of three of the four walls in the room, where the murals are, but not the projection wall.”

Sean was particularly impressed by the ShowPRO Photon 80, a compact RGB LED PAR utilising the latest in Chip On Board technology to project saturated perfectly mixed colours. The fixture comes with a magnetic lens attachment system for easy selection of 25° or 60° beam angles.

“The Photon 80s are really good because they are a really simple light as far as addressing goes plus they have a really good throw angle,” added Sean. “They come with the extra lens which you can use to create a narrow throw but in this situation where we want house lighting, we don’t use it and get a really nice wide-angle throw. They deliver such a nice even spread.”

The auditorium where the church services are held features a stage upon which four TrussMates act as up lights to the rear wall. These were chosen as a cost-effective option for four distinct wash areas to the back wall to give a nice backdrop to any camera work.

“The LED Fresnels are excellent,” added Sean. “I’ve used them on previous installations and no one can tell the difference between those and standard Fresnels. The colour temperature, the brightness, the barn doors and the option of a manual zoom are all great. They are a great swap plus it meant that we didn’t run into any issues with power and there was no need for a dimmer.”

Sean remarked that the backup from Show Technology was excellent with a special shout out to Gareth Mealing with Sean saying, “Gareth is very knowledgeable and knew what was most suited for the room”.