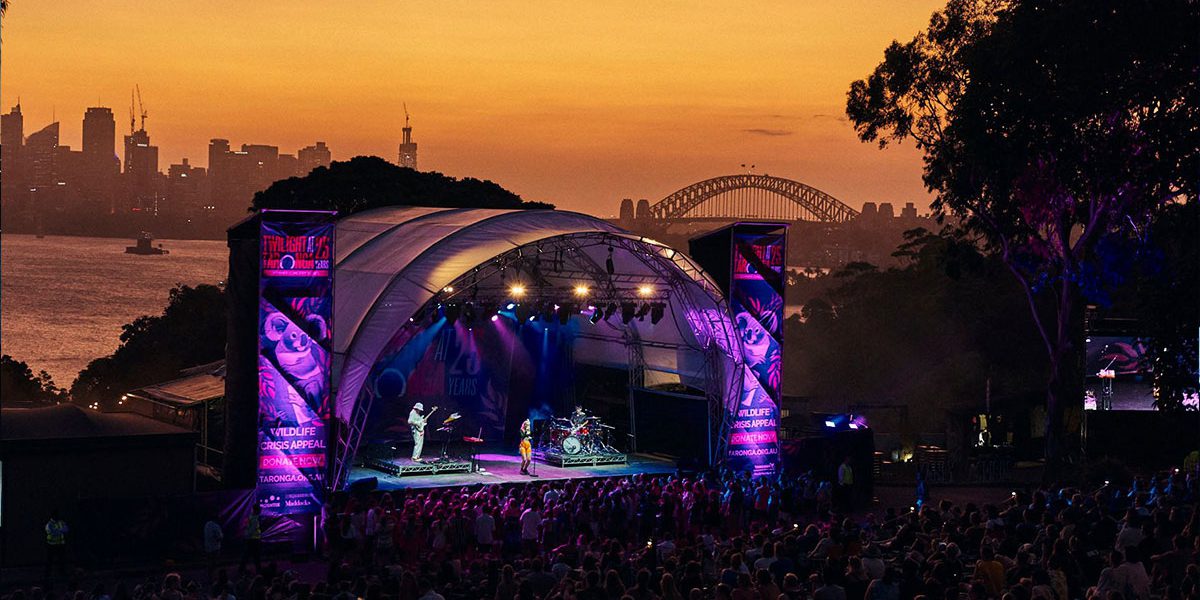 The 2020 season of Twilight at Taronga, the annual concerts held at the gorgeous grounds of Taronga Zoo, mark the 10th anniversary of EI Productions involvement with these highly popular summer shows.

So far this year the shows have been running along nicely with EI’s audio, lighting, LED screens, risers, and backline performing as well as the acts! Of course, as the gigs are held in February there have been a few cancellations and re-scheduled gigs due to Sydney’s insane weather – during one storm the wind meter on the LED screen structure measured over 90kmph!

The concerts this year are a mixed bag including The Broods, Pete Murray, ARC doing Abbey Road, Wolfmother and Bernard Fanning as well as comedy shows.

Neale Mace, EI’s managing director, has seen some memorable concerts over the years saying, “I don’t see all the gigs during the season, but from the ones I’ve seen Jimmy Barnes plus The Dead Daisies was a good rock night. I remember Daryl Braithwaite smashing it out of the park the last time he was there and cheesy at it is, Bjorn Again, who always do two gigs per season here, always deliver and the punters love it.”

The animals at the zoo present a unique problem at this gig as they are in very close proximity to the concert site. Whilst the lighting doesn’t faze them, the audio can so EI use the DSP available in the Martin Audio MLAc to Hard Avoid certain animal habitats.

“For the last couple of years they’ve moved the elephants, who were closest to the site, and replaced them with giraffes that are much more susceptible to noise,” commented Neale. “Thankfully, due to the DSP in the MLAc we’ve had no issues with the giraffes. We did, however, have an act one year who we had to stop during soundcheck as for some reason heaps of animals were freaking out during his soundcheck. It wasn’t loud, it was just a guy and an electric guitar, but something – and we’ll never know what – he was doing freaked out heaps of the animals. It was fine for the gig though.”

Every year is slightly different and EI works closely with the Zoo and their production manager to ensure every concert delivers an outstanding night out at this iconic location. Of course, they also aim to deliver the tech spec the acts require and to this end, EI regularly brings in different audio consoles, lighting floor packages, etc as required to fill riders.

After a decade, EI is used to the site restrictions such as the small, internal, winding access road, which limits the size of the trucks able to bring gear in and out. Of course, there are the ever-present off-site noise restrictions.

Over the years there has been one constant to EI’s Taronga rigs – the abundance of Show Technology gear and this year was certainly no different with the rig featuring Martin, Claypaky and ShowPRO gear.

Twelve Martin MAC Auras are the ‘go-to’ LED stage wash with zoom fixture for these gigs, ten Martin MAC700 Washes make up the front wash, as they have every year with Neale commenting that they still do a great job, and eight Martin Quantum Profiles are the main moving beam/profile type light for the gig.

“They are bright, have amazing gobos and are very reliable,” added Neale. “We also have four Claypaky Stormy CC LED strobe whose block colour or blinding strobe effect makes them a versatile light for these gigs. For static, white front wash we have eight ShowPRO LED Fresnels that are pretty bright and handle a bit of weather well. Finally, there are eight ProShop LED Duets as you’ve gotta have blinders – right? These LED versions are great and do an almost identical job to the lamped versions.”

This year the stage also featured EI’s Martin EC10 LED screens that run from the current Martin P3 controller that also does Martin Sceptron and all other Martin vision gear. The EC10s were their second foray into LED Screen world, after Martin LC Panels, and according to Neale, they’ve been a great choice.

“We have other LED Screen options in inventory, but the Martin EC10 is the right choice for this event,” he said. “The EC10 is reliable, bright and robust. The 10mm pitch seems big by today’s standards, but at this site, it works just fine. It goes up quickly and can take a beating. It’s used at Taronga Twilight on one of our truss LED screen structures for iMag work from two cameras and TVC’s + Info from the Zoo.”

The site got hammered twice in the recent Sydney storms and the gear held up well considering only the EC10 and Quad18 IP Pars, eighteen of which were used for site and tree lighting, were actually IP65 rated. Straight rain isn’t really an issue – when it’s raining sideways and there are 90km wind gusts then you really find out how good the IP rating is and how well you’ve planned. The EI crew does an amazing job of making sure everything is looked after, covered and battened down after each set of shows.