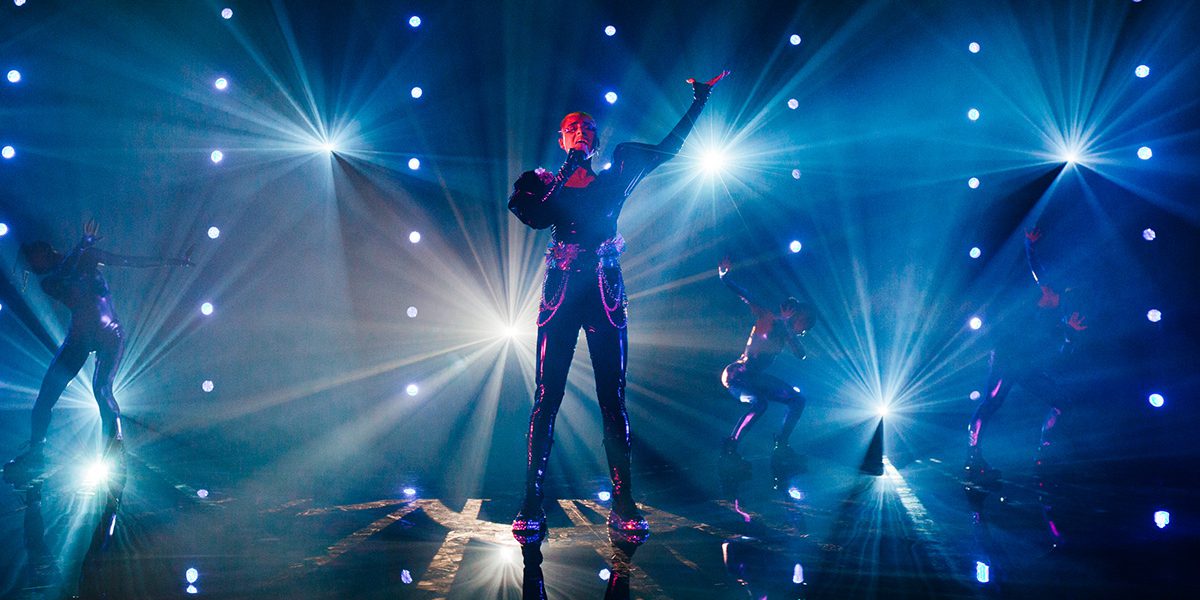 The Eurovision Song Contest was held last week in Rotterdam, with Australia’s entrant, Montaigne, making history as the first person to compete without setting foot in the host venue.

When the 2020 Eurovision Song Contest was cancelled, it was determined that Montaigne was to be held over to represent Australia in 2021. With optimism that a team would be able to travel to Rotterdam, Montaigne wrote a new song to comply with the rule that all songs must be released within six months before the main competition.

As usual, Blink TV were the producers for SBS Australia and once again, they invoked the services of Paul Collison from eleven DESIGN.

“Our mandate was to create something cool that could translate to the main stage of Eurovision, whilst also able to be used as our primary performance piece, on the off chance that the team would not be able to travel,” explained PC. “Just as importantly, we needed a look that would make Montaigne and her dancers look as powerful as they are, almost superhero-like.”

PC had been introduced to the Stop Mops Desk Dough towards the end of 2020 saying that he’d barely watched the intro video before getting excited about the potential of this product.

“The moment I heard Montaigne’s song Technicolour; I knew that the Desk Dough would be a perfect treatment for the song,” he added. “Not only because it provides an agile way to create some unique looks, but we could also scale it from the live on tape performance to the main stage of Eurovision easily.”

At its core, the Desk Dough is simply a media player in a compact and sturdy package that turns any digital projector into a stunning beam machine. The Plug and Play process makes it a quick and simple integration to a lighting console (in this case an MA Lighting grandMA3 light) through the projector and each Desk Dough has three internal fixtures.

“This allows for some cool transitions and effects,” said PC. “The console syntax makes it seem like you’re controlling a light but you’re not limited to gobo wheels clashing with each other or prisms that take an age to drop in. Everything is instant and snappy and we didn’t need to phone a friend once! The units were quickly and simply deployed without fuss. If there is a manual, we didn’t read it as it all made sense in an instant.”

The production design was quite simple with five Desk Dough sources driving seven Barco 20k projectors that wrapped Montaigne and her dancers. Whilst the projectors and Desk Dough sources could drive the entire creative, PC was after another layer of texture to build other parts of the song.

“I wanted some fixtures that would complement what we were doing with the projectors, not fight or overwhelm them,” he said. “The Martin VDO Atomic dots were perfect for that role. With their coloured ‘aura’ face and the punchy beam/strobe, we could add two layers of texture to lift the intensity at the right times. Both sources look amazing on camera and helped us take the look to another level.”

Of course, over and above the camera candy, Montaigne and the dancers needed to be lit. Eight Ayrton Mistral profiles added some light from the sides and front to ‘pop’ everyone out.

“Because they were so small, we could sneak them in quite closely on the sides and they weren’t obtrusive at all,” commented PC. “I’d not used the Mistrals much, so I was quite impressed with their ability and colour control.”

The last element to the package was the studio which was Big Picture’s Studio in Redfern. According to PC, the Big Picture studio space is probably the best equipped pop up studio space in Sydney. He says that the quality of cameras and knowledge of the BP crew really helped them maintain the level of quality they were after.

Big Picture integrated a Cue Pilot system with PC describes it as a fantastic tool. The Director can edit camera shots on a timeline that tracks timecode so the lighting cues can be trimmed to frame to match camera shots.

“Before using it a few years ago, I had thought it might stifle creativity as I could see us getting bogged down in timelines and camera operators missing their cues,” added PC. “However, now I see that it as a tool that unleashes creativity. Knowing there is a camera cut on the exact beat, means we can light for each shot. There is no lag of a vision switcher hitting the button a fraction late, or a Director making a line call to go elsewhere – although one can still override if needed. It’s so much fun zeroing in on such detail.”

Whilst the team were disappointed for Montaigne to miss out on the final, they were all proud of the product they managed to achieve. It was always going to be a hard road not performing live in Rotterdam. Here’s hoping for next year in Italy.