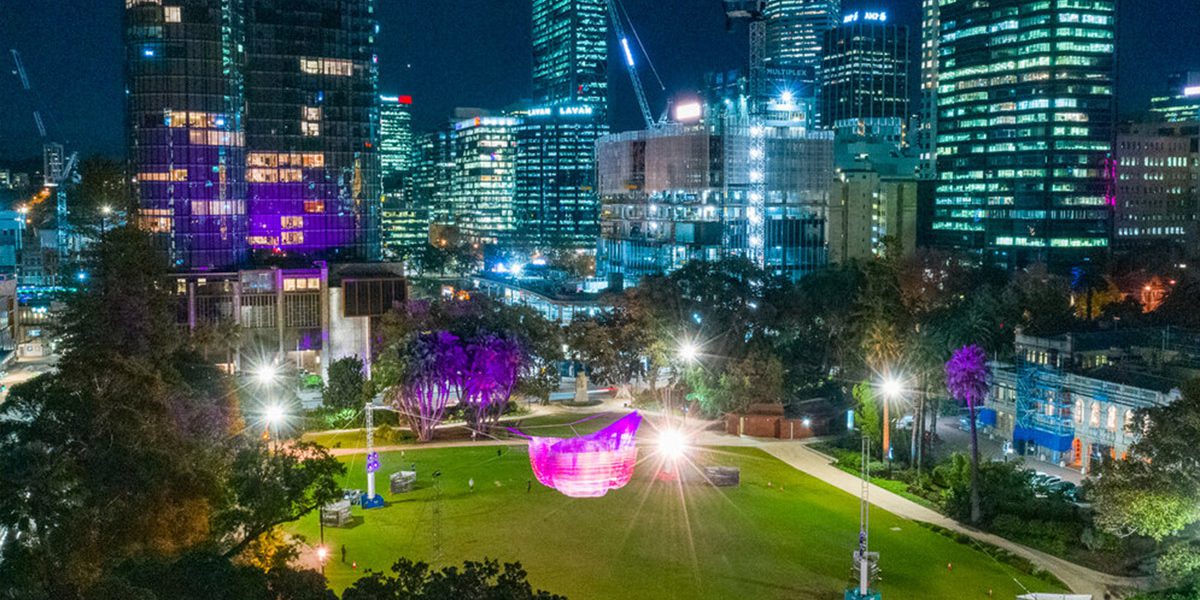 Between June 28th and July 24th, 2021, Janet Echeman’s 1.8 sculpture will be exhibited in the Supreme Court Gardens in Perth, Australia. This is the first time one of Echelman’s artworks has been seen in Perth and is only the second time her work has featured in Australia.

This stunning suspended artwork spans over 1,700 square metres and replicates the pattern created by a significant earthquake event in 2011.

Echelman’s studio modelled the physical form for 1.8 using a scientific data set about how a single geologic occurrence in one part of the world had ripple effects all over the world. They measured the change in wave heights of the ocean’s surface as they rippled across the entire Pacific Ocean following an earthquake that originated in Japan in 2011. Its form is a manifestation of interconnectedness – when any one element in the sculpture moves, every other element is affected. The earth’s day was shortened as a result of this physical event and the length of time measured in microseconds. Titles within the Earthtime series sometimes refer to that numerical measurement of time.

The sculpture combines fibre, buildings and sky combined with coloured lighting. The fibres are braided with nylon and UHMWPE (ultra-high molecular weight polyethylene) and the dimensions of the net are 30.4m length x 13.7m width x 6m depth.

This immersive experience is impressive both in the day and night, when it comes to life with a projected light show at 5.30pm, highlighting the artworks kinetic movements.
Showscreens project managed, designed and installed the rigging for this incredible piece, with the lighting supplied by Lux Events.

Fortunately, Lux Events recently took delivery of sixteen Prolights Panorama IP WBX high-output LED wash lights which were perfect for the project particularly as they are IP65 rated. Delivering a massive output with a huge colour range, the Panorama IP WBX fixtures effortlessly wash the sculpture night after night.
“We’ve been getting more requests for lights outdoors and previously we had made some IP-rated boxes but these are certainly much easier!” commented Dave Trapp, managing director of Lux Events. “We checked with other production companies who own them and they confirmed that they are a very reliable product.”

Lux Event’s Frans Jansen was in charge of lighting the 1.8 project revealing that the artist was not overly specific on the lighting requirements.

“In the beginning, there wasn’t much of a brief however I looked at previous installations of 1.8 online,” said Frans. “On programming night I spent quite a bit of time getting the positions right and focusing lighting before seeing which colours worked best and creating cool effects. The majority of the artwork is lit with static lighting although there are a few movement effects. After we’d programmed a few sequences, we sent a video to the artist for feedback which resulted in the updating of some cues.”

The artwork hangs off four trusses that were also the only positions for lighting and so each truss holds four Panorama IP WBX. The fixtures are exposed to the elements for four weeks and so far they have performed amazingly.

“They have already survived an unprecedented amount of rain without a hitch,” added Frans. “They are an incredible fixture! They have some serious power in them especially for longer throws and being an LED fixture, they punch hard.”

Frans programmed the lighting on an MA Lighting MA2 onPC and then recorded the show into a CueCore2 controller which switches the show on every night from 5.30pm through until 2am.