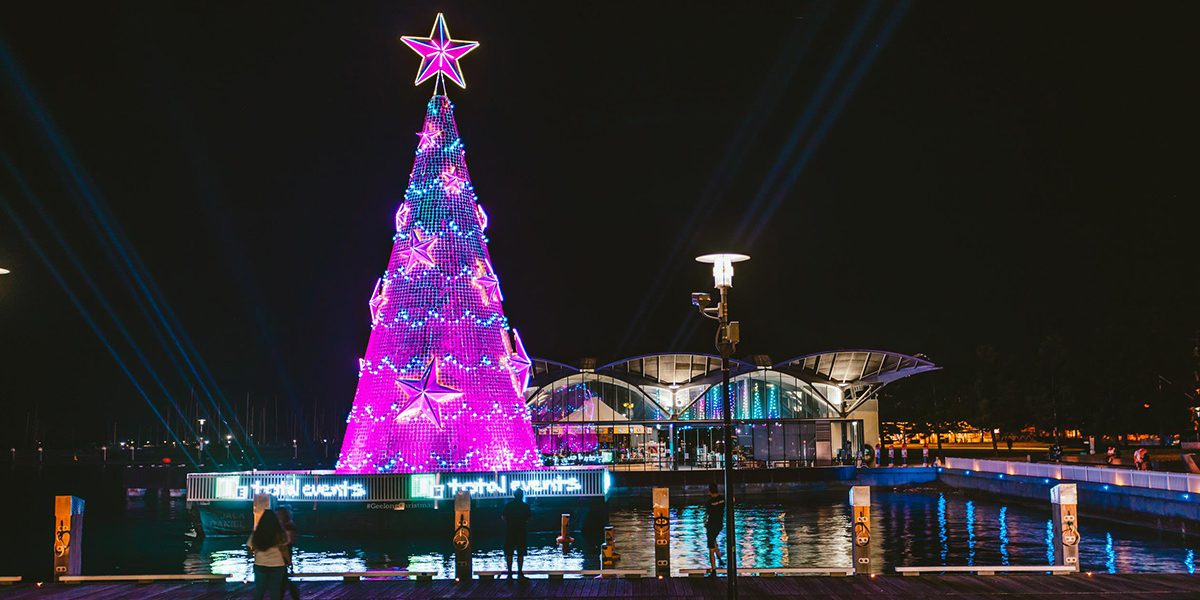 Geelong’s spectacular Floating Christmas Tree has returned to the bay for Christmas with a sound and light show staged each night between 8.30pm and midnight. The shows are approximately six-minute in length and play every 15 minutes.

In between shows, an interactive website allows you to change the light colours of the tree and star on top!

Total Events Co has been lighting the Floating Christmas Tree for several years but this year they had a new fixture in their arsenal – the ShowPRO Neptune 400 Wash FX!

“For the past few years we’ve just had eight LED Pars placed inside the tree just for some contrast with the backlighting of the discs and stars versus what’s happening outside,” explained Scott Parker of Total Events Co. “This year we decided to step it up by using eight ShowPRO Neptune 400 Wash FX fixtures instead which has allowed us to create the same internal beam effect with added effects such as movement inside the tree.”

Four ShowPRO Neptune 400 Wash FX are located at the base of the tree with the remaining four halfway up the tree.

“We know that as soon as they come off the tree there will be plenty of work for them as they are a bit of an all-rounder,” said Scott. “We’re doing more and more outside work so any product that is IP-rated is more of a preference for us.”

Twenty ShowPRO LED Flood EX36 circle the base of the tree from where they can colour wash and illuminate the exterior of the tree. They are a mix of wide and narrow lenses to be able to get the light up to the top of the tree and also down low. A massive 288W of RGBW LED power, housed in a neat IP rated fixture, makes this our most sought after, high powered outdoor LED fixture yet.

Also at the base level are twelve Martin RUSH MH 7 Hybrid all-in-one beam, spot and wash moving head fixtures. These are protected from the weather by Claypaky Igloos.

“The MH 7 work really well,” added Scott. “They’re a hybrid fixture so they can go nice and tight for the beam effects in the sky and still give you gobos on the tree.”

The RUSH MH 7 Hybrid’s features include sharp, crisp optics with a powerful zoom that ranges from a smooth 45° wash to a punchy 2.2° beam.