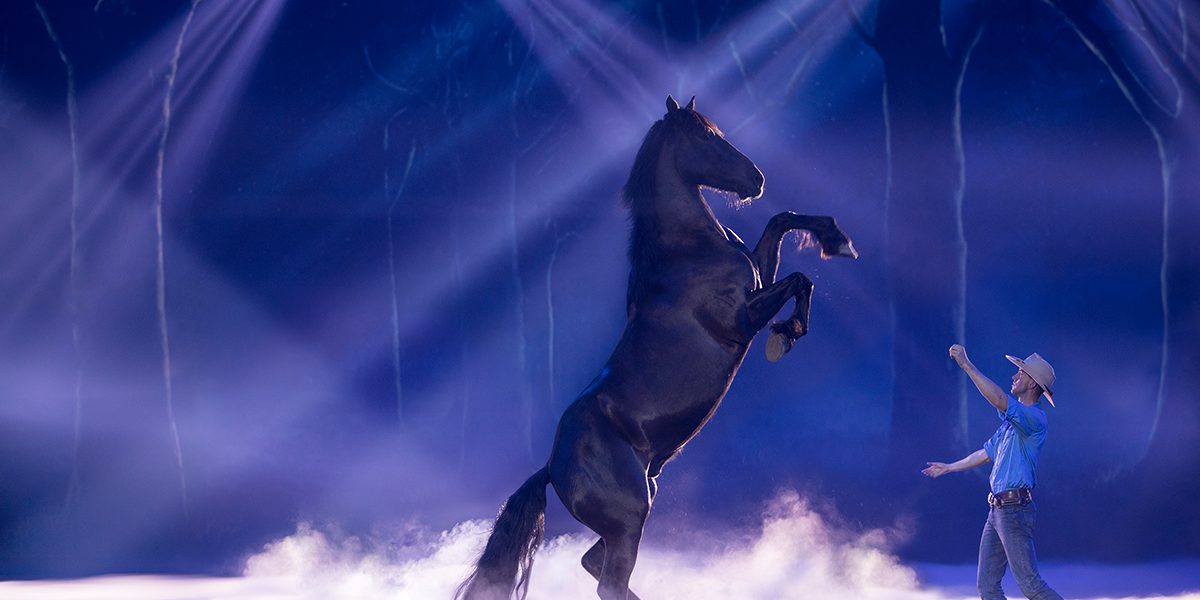 Since opening to the public on April 4, 2006, the original Australian Outback Spectacular Show has captivated the hearts of over 2.5 million people through its high-quality productions.

In the current production, Australian Outback Spectacular’s Heartland, guests embark on a journey to the heartland of Australia through an all-new show featuring true Australian characters, a transformative arena, mesmerising animals and immersive technology.

Making its debut in 2018 and including a delicious three-course dinner with beverages, Australian Outback Spectacular’s Heartland takes guests on a compelling and emotional ride into the heart of the Australian bush.

An incredibly sophisticated and advanced technical installation provides the audience with a unique experience where they are transported into the outback through complex and immersive audio, lighting and projection.

Projection mapping assists in showcasing the diversity of the Australian landscape moving from the red dust, rocky outcrops and rugged plains to the luscious green fields feeling the effects of a thunderstorm consisting of clapping thunder, electric lightning and drenching rain.

Since the launch of the Heroes of the Light Horse production in 2009, the MA Lighting grandMA2 control system has been at the helm of the venue’s systems of visual and special effects. After 13 years of faithful and reliable service, the time had come to upgrade the console to the latest technology.

As one of, if not the first shows in Australia to adopt the grandMA2 platform, it was a natural progression for Australian Outback Spectacular to upgrade to the MA Lighting grandMA3 console.

The grandMA3 Light CRV console was chosen by the technical team owing to its ability to allow them to customise the work surface in a way that suited their existing control room. By allowing for external touch screens to be installed in suitable locations, rather than being fixed to the console, show operators have been afforded much more open views of the performance space.

With over 16 years of experience with the venue, Show Technology’s Clint Dulieu was on hand to assist the in house technical team with integrating the new console, as well as updates to their grandMA nodes and DMX distribution infrastructure to ensure a seamless upgrade process with no downtime for the permanent show venue.

The grandMA3 Light CRV console offers the best of both worlds with its software. As the existing show is fully programmed and finely tuned, the ability to continue running the grandMA2 software for the show, whilst immediately taking advantage of the new powerful features of gandMA3 for the next production is a real bonus.

Off the back of over a decade of reliability and support from MA Lighting and Show Technology, there was little question on which series of consoles to upgrade to, the only question was which model!