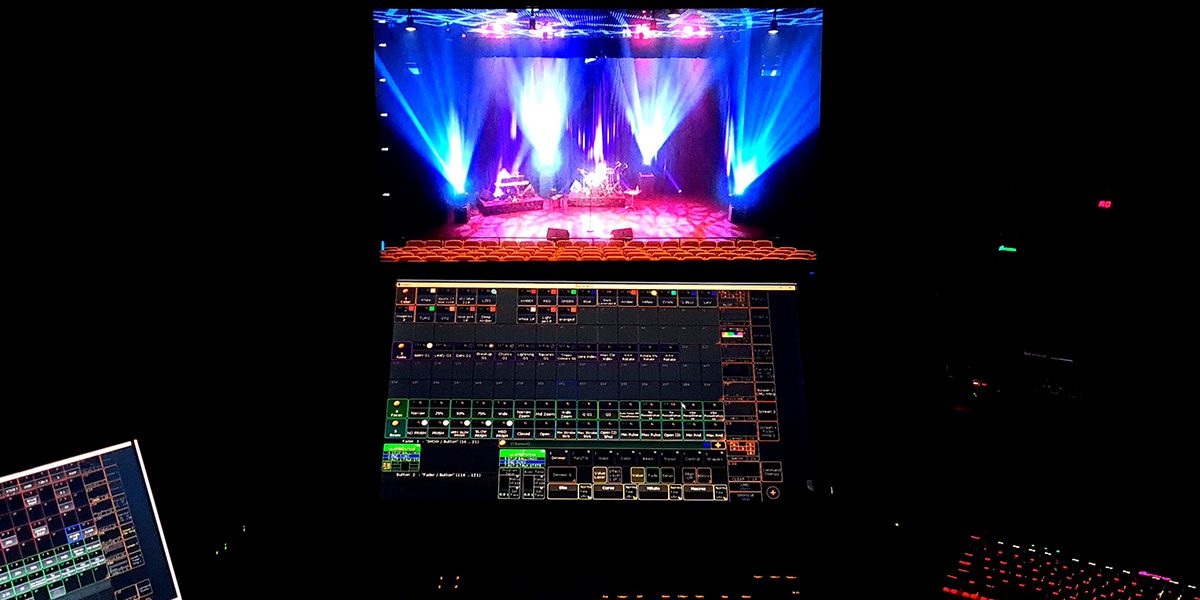 Whilst everyone is happy to be back at work after a rotten two years, staff shortages and isolation mandates have made navigating this new landscape incredibly difficult.
Last week, technical staff at Toowoomba’s Empire Theatre were one by one having to isolate due to close contact with Covid-19 which was a concern as they had two big shows on that weekend: Kitty Flanagan and Rhonda Burchmore.

When Ben Hunt, Head of Lighting at the theatre, also had to isolate things got serious!!

“We ran out of lighting operators so Tim Panitz, our Technical Manager, and I had to come up with a plan,” said Ben. “We decided that a form of remote operation was the only option. We were aware of what needed to be done from the console side of the operation to get it remotely into the room, it was the video and audio delay we weren’t sure about.”

Initially Ben planned to do the remote control via a VPN through one of the theatre’s firewalls but it soon became apparent this wasn’t going to work.

“It can be a bit of trial and error when you’re dealing with VPNs, multiple layers of different subnets and VLANs trying to get the traffic to flow the right way everywhere,” he said. “Then the firewall we had to use was actively being used to sell tickets, we decided not to mess with it too much!”

The guys put their heads together and came up with another solution that turned out to be a great success.

The MA Lighting MA2 platform is used exclusively across all of their venues with an MA2 light in the main theatre however, Rhonda Burchmore’s show was in the Armitage Centre where an MA2 onPC set-up is utilised.

“We have a couple of onPC stations, one running as primary and the second as backup, with a command wing and a fader wing also in the room” explained Ben. “At home, I used TeamViewer remote desktop solution to remotely access the screens on the computer in the control room via the PC’s second network interface, that way the local lighting network on the primary interface is still isolated from the internet. With screen control sorted the next challenge was getting a remote command wing at home to be able to connect to that remote computer. That’s often where a lot of plans get stuck.”

After some research, Ben discovered USB Network Gate software and decided to give it a trial. The command wing was run directly through this software which connects it directly to the remote computer which sees it as if it was plugged in directly via the USB port on the side.

“It turned out to be a better low latency solution all round, when using a VPN like we had planned initially you do add some latency between sites so by stumbling across this software solution we ended up with a more responsive system” added Ben. “From my end at home, when I pressed a button on the command wing there was no noticeable delay. There’s a very slight delay in TeamViewer on screen but the command wing was virtually instantaneous feedback which was a definite confidence booster to actually fire cues live at home. Also if TeamViewer was to crash, the command wing would keep working without being remoted in so essentially as soon as I boot the computer up on my end, it finds the network gate in the room and then connects directly to that computer straightaway.”

NDI Bridge and NDI 5 video-over-IP protocol were used with a pan/tilt zoom camera in the room enabling vision and audio to Ben back at home.

“Pressing GO on the lighting console to doing a full round trip to work and then back to me via the NDI feed was about 0.2 seconds of delay so it was very fast,” commented Ben. “Programming-wise, it meant there were no issues having to compensate for delay but we did have our theatre technician Riley in the room to run face light for the show as well as snap cues and some busking on top, anything that was time-critical where you’d notice a 0.2-second delay.”

And for those of you wondering if Ben has a higher speed internet service at home, his connection is Fibre To The Home and he is on a 50Mbps down 25Mbps up service.
+
“I may have imposed a Netflix ban in the house for the show that night to be sure that I had the room to move but this solution would work for anyone with a stable broadband internet connection from their provider at home,” he added. “Traffic varied on the night but on average it was sitting at 15-20Mbps down and 5-10Mbps up at home.”

Show communication was critical and also had to be addressed. Fortunately, Empire Theatre recently upgraded to Riedel’s Bolero wireless intercom system across their precinct so Ben only had to make a mobile phone call into the venue that was then routed into Bolero via its Bluetooth system.