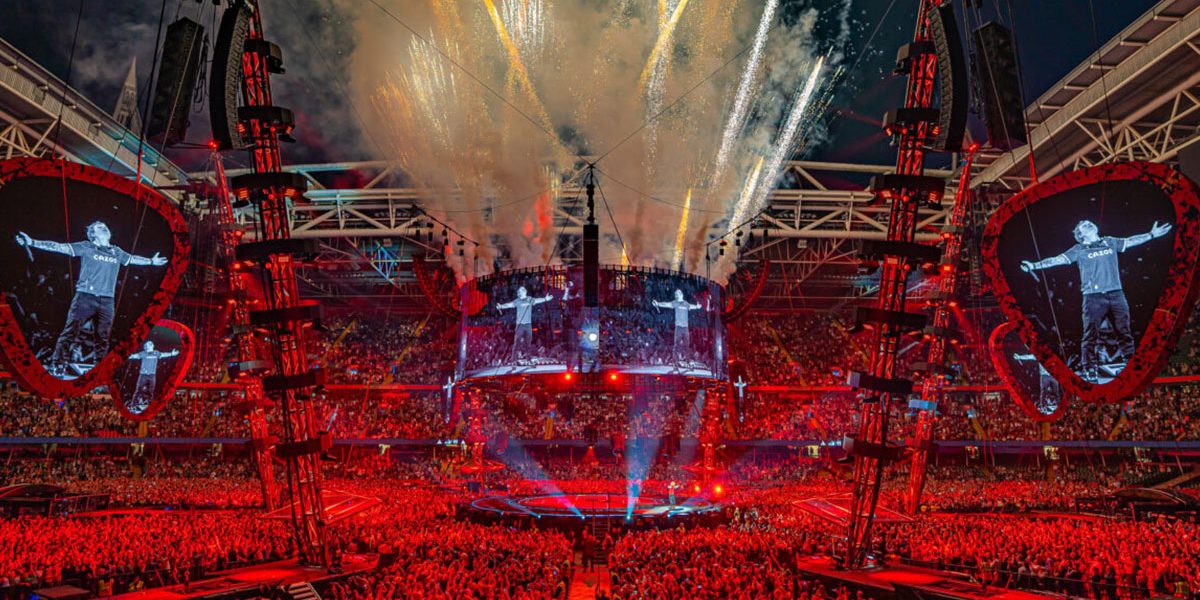 Designed for rendering a D65 white point that allows perfect colour reproduction, Cobra is the only luminaire on the market capable of illuminating an object several kilometres away, with an output of 386,000 lux at 20m, an unprecedented 38x zoom ratio and an incredible zoom range of 0.6° to 23°. Possessing continuous pan and tilt, a highly innovative colour section and unrivalled graphics capability (including 92 gobos, four prisms and an extreme range of focus (XT-Focus™) which permits the beam shape to be adjusted according to the operating distance), Cobra is also IP65 rated.

The Mathematics production design is a huge, in-the-round, stadium setup with an unprecedented open design, with no roof, a large circular video screen over the revolving stage and six mammoth masts held in place by a cable net system.

Embedded around the outer perimeter of the stage are the 22 Cobras that tend to be used in the latter part of the show after twilight following the video-heavy first half of the show when the atmosphere ramps up.

Melbourne-based lighting director Matt Jones has worked with Ed for several years and we caught up with him in Gelsenkirchen, Germany, where the weather gods were rather unkind.
“It’s a miserable day – thank God for IP-rated fixtures!” remarked Matt. “When I was first introduced to the Cobra, I was first blown away by just how many features are inside it. When I was told there were 80 gobos on one wheel I was amazed that those many features could be packed into one unit. It’s quite impressive.”

Matt would go so far as to say that the Cobra is a new forefront in concert lighting with its’ innovative laser technology. He was given a run-through of the Cobra at Ambersphere Solutions in the UK and he was astounded by the fixture’s light output.

“The tight pencil beam is absolutely stunning,” he said. “When you use this effect in an open-air stadium, you really do get a tight pencil beam that reaches into the sky for kilometres, the intensity of the beam is incredible. Some amazing engineering has gone into it.”

Matt added that an infinite pan and tilt, 92 gobos within one fixture, CMY colour wheel, frost and two sections of four individually combinable rotating prisms are beyond amazing.
“The zoom range is very versatile so not only can you have that tight beam, you can have a good profile effect fixture that gives nice gobo effects or lens flare you can get from looking down the camera. You can also use it as a wash fixture with the frost feature.”

Matt commented that the Cobra’s natural white is very good, the best he has ever seen for a laser fixture, and that the colour reproduction from the CMY is also excellent.
For Ed Sheeran’s show, the Cobra is used primarily to deliver aerial effects and to give that floor kicker look for people up in the stands. As such, they don’t benefit the people on the floor so much as they’re usually pointing up in the sky or in towards the stage.

“They allow me to add some fill behind Ed in the camera shots where they catch a bit of smoke and fill the black,” explained Matt. “They act as a floor fixture but stay out of the way of actually being on the floor so you’re not cluttering up the stage. They deliver lens flare and eye candy look for people up in the bleachers.”

Although Matt says that the Cobras come into their own on this show when they’re used without gobos doing the impressive tight pencil beam effect, he says they have all the apertures plus all the aerial effect gobos you’d want to use in a fixture like this.

“It’s a good selection of gobos – 12 rotating plus almost any other gobo you could want,” he added. “I use gobos for eye-candy twinkly looks, quite often with the animation wheel. It’s useful for drawing attention back to the stage in such a large show.”

Mark Cunniffe added that he was very impressed with how well the Perseo, Domino and Cobra complement each other.

“The Cobra was the icing on the cake! I knew nothing about this fixture but Chris showed it to me when I went to Ayrton HQ to test the Domino. We tried it outside the warehouse and I couldn’t believe how far its throw was. I knew it would look great around the edge of the stage. The product was still on the R&D bench at that stage but Ayrton pulled out all the stops and got me the number of units I needed in time. I don’t think I’ve ever met a lighting company that literally delivers everything it says it would.”