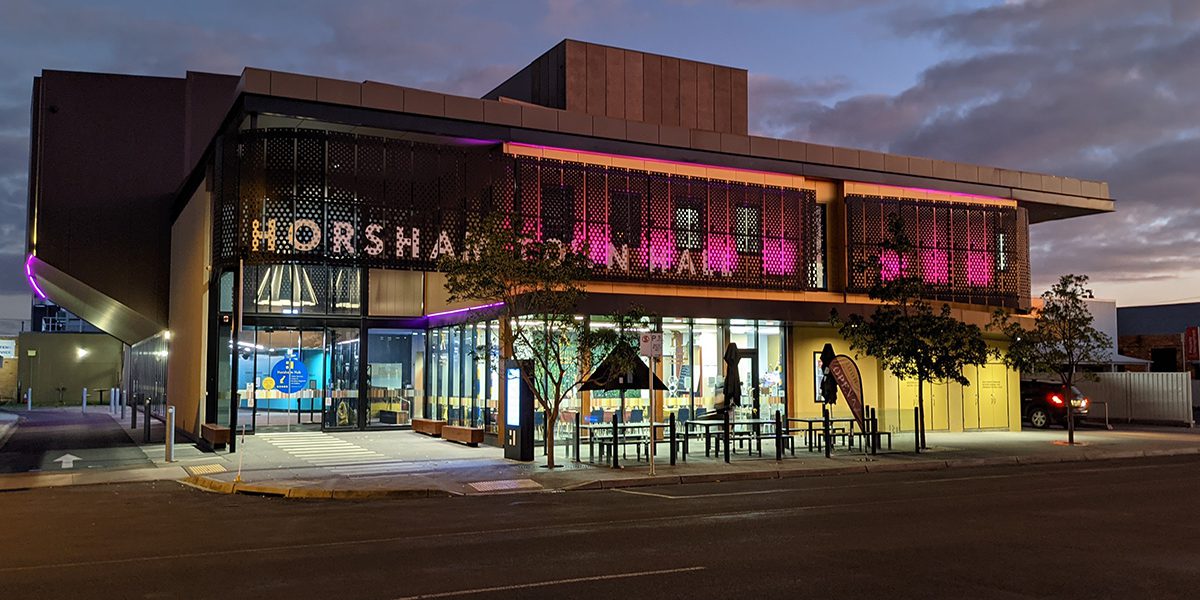 In previous years, the building has been lit up at night by cheap fixtures that started to fail after only a year so when Shane Podolski, Team Leader HTH Operations for Horsham Town Hall, was tasked with lighting up the building to commemorate the death of four Victoria Police officers who lost their lives in the Eastern Freeway tragedy, he knew it was time to upgrade to a quality fixture.

“Two of the seven ‘blues’ were not working and it was quite obvious,” he said. “Then, when you want to light the building in purple for Domestic Violence awareness, you have two red panels! Plus you couldn’t individually address the fixtures so we couldn’t do anything for Pride.”

Shane turned to Light & Sound Solutions who recommended the Studio Due SlimBar RGB, an ultra-small form factor LED linear bar with IP67 rating protection and onboard Power Supply. Not only was it the ideal accent light for the project, but it also carried the Studio Due reputation for quality and reliability.

“They were also the right price which was important as they were not a budgeted item, more a need to be fixed item!” commented Shane.

Seven SlimBars light up the façade of the Town Hall although the council has already agreed to more SlimBars to be added to the façade as they are so impressed by the result. Shane is hoping for even more so that the fly tower can also be illuminated making the building highly visible around town.

Shane remarked that he was easily able to address the SlimBars and he likes that they can be connected as they’re not hard-wired like their predecessors.

“Previously if we needed to swap a fixture out we had to call in an electrician,” he added. “If a SlimBar was to go down, it would be very easy for us to get a replacement from Melbourne and install it ourselves.

“I like the size of the SlimBar and how it mounts, plus their wash up the wall is amazing. The previous fixtures were just spots up the wall but the SlimBar lights up a good section.”

In the photographs, the furthest section lit up to the left is a brown wall whereas the others light up a gold-coloured wall. Shane and his team simply played with the colours and intensities until they matched and the result is quite spectacular.

The lights are controlled through a Philips Dynalite system with a time clock for automatic turning on and off. Usually, the colours change through the night but are fixed for special occasions.