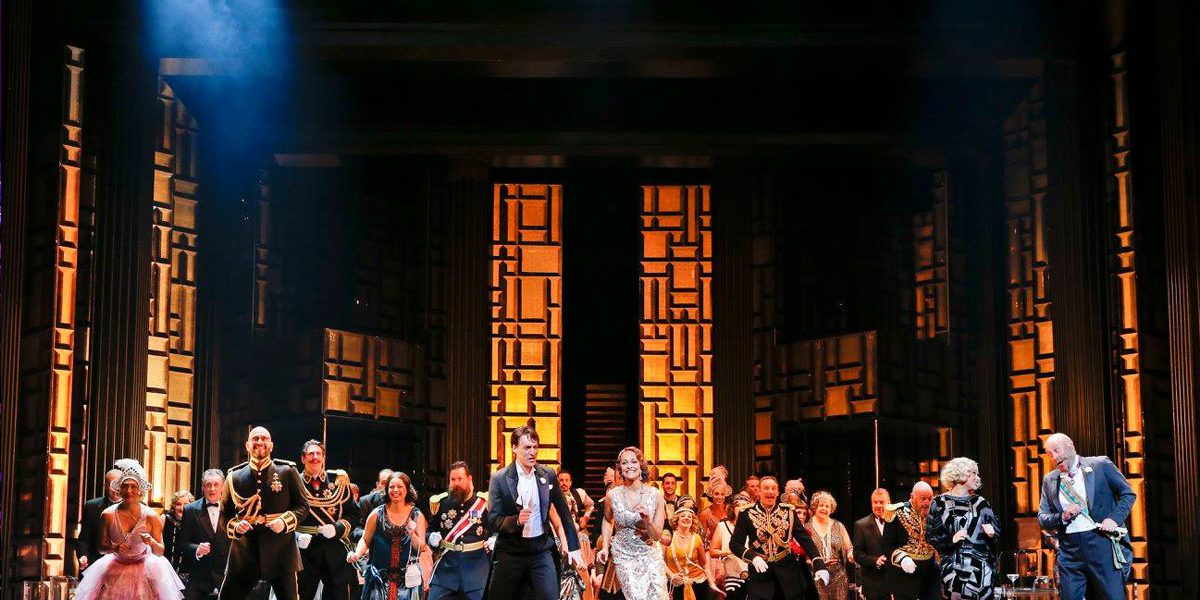 Graeme Murphy waltzed his way through many a production of The Merry Widow for the Australian Ballet, and now turns his renown as a director and choreographer to the operetta itself. He brings the action forward just a little, from the turn of the century to art deco Paris of the 1920s. It’s a dream canvas for the design team: Michael Scott-Mitchell’s dramatic sets feature faceted mirrors, geometric screens and a stunning Monet-inspired night garden.
Jennifer Irwin’s costume designs include elaborate braided dress uniforms for the men and elegant shapes with stunning embroidery, feathers and prints for the women. Lighting designer Damien Cooper creates a shimmering world for Hanna and her admirers to play in.

The Joan Sutherland Theatre closed in May last year for the first time since opening in 1973, to replace theatre machinery that had reached the end of its operational life – the more than 40-year-old ‘engine’ of the JST – and to use the opportunity to make significant improvements to the orchestra pit, acoustics and safety.

As well as a new theatre flying system that is quieter, safer and more reliable, there’s an improved grid deck providing a more flexible system of hoists and a clearer, more open work area. But the cherry on the cake is the addition of eighteen Martin Professional MAC Encore Performance WRM fixtures that integrate cutting-edge LED technology with a proprietary and innovative light engine carefully engineered to generate pristine, full spectrum light with ultra-high colour rendition.

Lighting designer Damien Cooper was delighted to have such contemporary and innovative gear on what was his third production of this classic opera.

“There were quite large equipment changes with this production,” commented Damien. “We spent a fair bit of time just changing moving lights over during the transfer. Fortunately I had Kyle Bockmann as my programmer and he is excellent.”

Seventeen of the MAC Encores were rigged on the orchestra bar from where they were basically replacing twenty-two ETC Source Fours. The feature-packed moving head offers unparalleled 3000 K warm tungsten emulation that truly challenges the output quality of a real incandescent light source.

Its advanced colour mixing system delivers the full palette from smooth and subtle pastels to rich and vibrant saturated colours. Moreover, it offers a fully variable colour correction to blue/daylight.

“The MAC Encores were excellent,” stated Damien. “Optics, gobos, coverage, balancing with other fixtures – all were incredible. They’re quiet and there was no light coming out of the back of the fixtures which was fantastic. Being rigged on the orchestra bar made them a very visible moving light so that was great.”

The Merry Widow is an operetta, a light musical, and Damien discovered that the MAC Encores allowed him to achieve many downstage centres, lots of punctuations and extra coverage.

“It was very refreshing to be able to use front light a little bit harder in the JST as it was quite restricting before,” remarked Damien. “The MAC Encores did a lot of specials, front of house washes, gobo work onstage and musical accents as everything is programmed to run on a musical button.”

Damien was fortunate to also have nine Ayrton WILDSUN-S25 fixtures in his rig, as they were recently purchased by Opera Australia. The Ayrton WILDSUN-S25 is the full colour variation on the powerful WILDSUN-K25 luminaire. Equipped with 217 ultra-powerful RGBW mono-chip LED emitters, this technologically innovative marvel is the most powerful moving-head LED wash fixture on the market today.

“The Ayrton fixtures are very big, very bright and we used them to replace Vari-lite VL3500 washes, which are also big and bright but tend to unbalance against each other as the discharge lamp runs over time,” added Damien. “I enjoyed using the WILDSUN-S25 fixtures but would like more time to get to know them. There’s not much halation coming off them which is really good because they were great in a legs and borders situation. It meant we didn’t have borders being unduly lit which can be a problem with some of the moving head LED fixtures. There’s a substantial noise reduction from fans compared to the VL3500’s which is always good for an opera situation.”

This delicious new production of The Merry Widow plays at the Joan Sutherland Theatre until February 3rd.