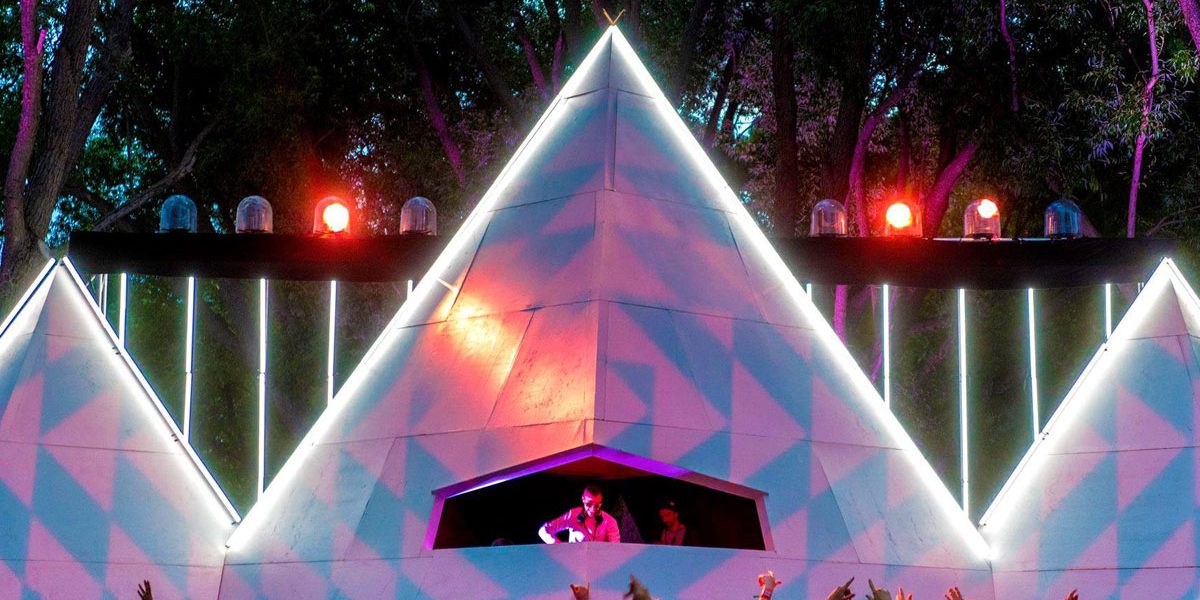 Based in Queenstown, TomTom Productions is a design oriented production company offering a wide variety of lighting and video concepts to events throughout New Zealand’s south island and beyond.

“Our favourite thing about Rhythm and Alps is the creative freedom given to us by the festival allowing us to experiment with new designs and new equipment” explained Hamish Edh of TomTom.

The Sceptron was used to highlight and outline the pyramid stage with the main faces of the pyramids projector mapped, more linear strips of Sceptron were placed at the back of the stage to add depth and were topped with MAC101’s for colour and movement on the dance floor.

When considering new moving heads TomTom was initially interested in MAC Vipers but decided they were a little too big for some of the smaller venues they work in so they went for the all-in-one option of the Claypaky Mythos 2. Hamish commented that the Mythos 2 was the perfect compact fixture for the variety of work undertaken by the company.

“When providing lighting for corporate functions we require a fixture that is as versatile as the event itself,” he said. “The Mythos provides us with soft colours and gobos, an even wash for a dinner or reception then they can switch into a beam effect light for complimenting bands or DJ’s.”

On the Rhythm and Alps Main stage the Mythos 2 were integrated with five L-shaped video screens and had no trouble providing enough brightness to cut through the screens and provide some powerful looks and strong colours.

The low power consumption of the Mythos 2 was also an attractive selling point as TomTom often deal with venues that don’t have huge amounts of power.

“Having a fixture that is so bright and a whole heap of them can run off a 32 amp supply is a real bonus,” said Hamish. “We do quite a bit of production up on the mountains where we can throw a couple of them on a small generator and integrate them with our W-DMX wireless system – it’s super easy.”

The non-festival photos show TomTom’s initial testing of their Mythos 2 including when they shot the Mythos 2 beam several kilometres into the air at dusk.

“That was super impressive especially as it wasn’t even properly dark,” commented Hamish. “The photo hasn’t been enhanced at all, it was naturally that amazing! Despite the amount of ambient light in the background you still got a really nice defined beam.”