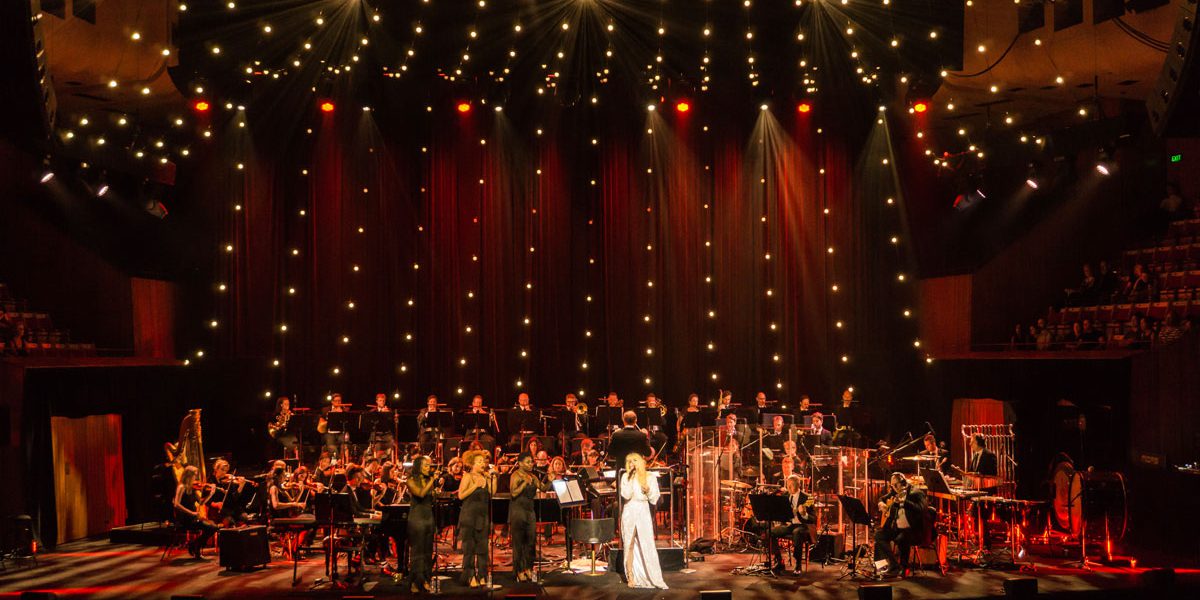 Brit Award winning and multi-platinum artist Paloma Faith made her debut with the Sydney Symphony Orchestra at the Sydney Opera House this April.

Surpassed only by Adele, Faith is the first female artist this decade to have her last three albums go double platinum in the United Kingdom.

“The Claypaky Scenius Profile is currently my favourite moving framing profile on the market for anything theatrical or concert with theatrical requirements,” he said. “They tick all the boxes for me especially colour CRI, framing responsiveness and accuracy whilst still having a high output. They are also a fair bit quieter than some of the other big moving lights in its class. It’s also refreshing to have a different gobo set which has some nice textures and you also don’t lose too many options for gobos despite there being a framing assembly.”

For this show, although quite pop, the framing was particularly useful for containment, keeping light off the orchestra, audience and the monitor consoles. Peter used just six Scenius Profile but they filled the whole downstage area with ease and occasionally kicked out into the crowd for the more audience involved moments.

This was the first time that Peter had used the Martin MAC Encore Performance CLD and he reports that he was rather impressed by their output and quality.

“I’m pleased to see we’re getting closer to the brightness league of fixtures like the MAC Viper and Scenius in an LED unit,” he remarked. “The Encores produced nice colours and though they weren’t quite up to matching the Scenius’ level of brightness, to replace my standard workhorses I could definitely see them holding their own. I’m looking forward to using them soon on a more theatrical style of show or in a noise sensitive environment, say with a classical ensemble as they are very quiet for their size and output.”

On this show Peter used six Encores as downstage backlights and occasional specials for the band, backup singers and Paloma. In this duty they worked really well. One single fixture of the six was enough to backlight her for most of the show, even when zoomed out to cover her increased movement on the night.

The brief for this show was less rock and roll and more poppy fun and colourful whilst still holding some theatrical elements. Peter needed to find a product that filled the space with colour and movement without relying on haze and beams as he wasn’t sure he was going to be able to use it with the performer until the day of rehearsals.

“I’d seen the ShowPro Dreamfest in the hire shop a few times now and thought, one day it would be fun to use them,” commented Peter. “Initially I didn’t consider them for this kind of show, worrying they would be too tacky and nervous the stage might end up looking like a backyard BBQ, but as with everything it really comes down to how you use them. I knew they would only work in a large quantity and at relatively close spacing. I’d seen a few videos online of them hung in straight, taught lines and the spacing looked about right to create an effective low resolution pixel-map.”

Peter deviated from the straight lines and tapered them out from a downstage centre truss over Paloma back to a mid-stage truss, creating that scalloped hung look, but then dropping them down steeply to just behind the back row of musicians, again, with a slight fan out. There were more strings coming from the top out to side trusses (which he puts in all of his orchestra shows) and once those were included it created a nice crown and canopy over the whole stage.

“The result was great and everyone involved was happy with the end result, and I’m pleased to say no one thought ‘backyard BBQ’ once it was all hanging!” Peter quipped. “The units themselves were very easy to connect up, power and data runs all down a single festoon string (just like regular festooning) and the globes simply unscrew if you need to swap them out. Out of the 300 odd globes we had, we only had to swap out two over the week and tighten another couple that had simply lost connection to the data line from coming loose in transit.

“I’ve done other shows recently with lots of LED pixel fixtures which really causes the universe count to skyrocket, but for this one, the whole arrangement fits in under two universes and was driven from a merge of the lighting console and my MADRIX controller.

With that in mind, Peter would definitely recommend the festoon to anyone looking for a big look without chewing up too many channels.

Peter would like to give a big shout out to Intense Lighting Hire who looked after him with a very nice selection of fixtures at the right price.