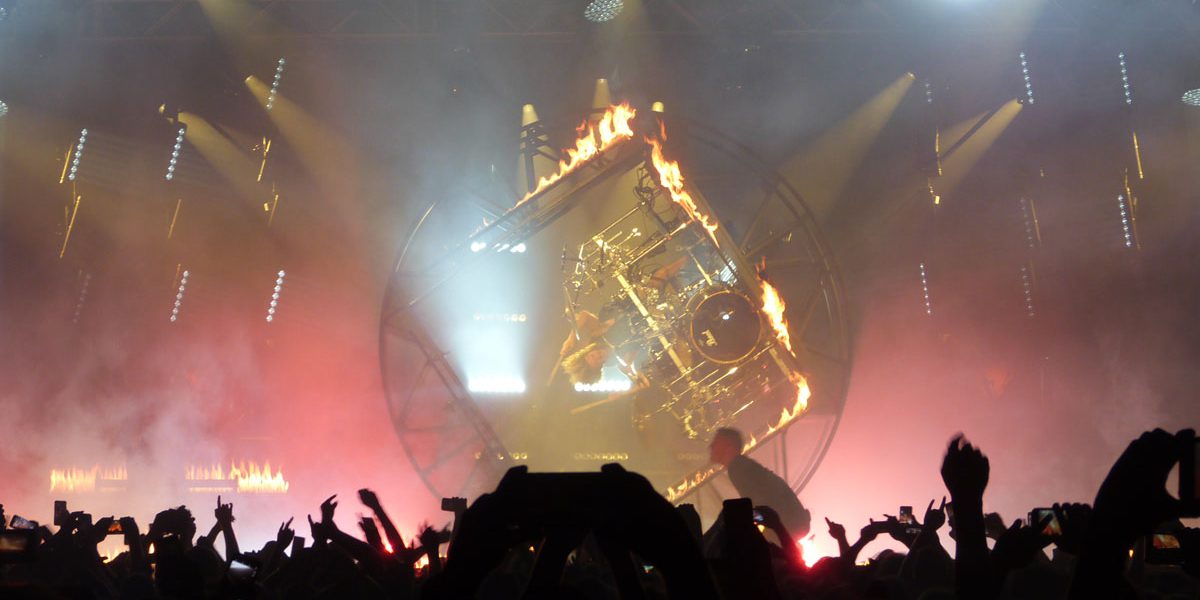 Hailed as their best live show to date, Parkway Drive’s ‘Reverence’ tour was a total sensory overload. Following back-to-back ARIA no.1 spots, the Byron Bay based metal band delivered their most fire laden show yet, including a spinning drumkit aflame and of course using 16 x Ayrton Ghiblis for the main beam fixture!

Lighting provider for the tour was EI Productions who purchased the Ayrton Ghiblis just prior to the start of the tour.

“I don’t think I’ve seen a light (especially and LED based one) have so much punch and colour output, not to mention it’s zoom. They were chosen by the band’s lighting designer Steve Granville after he heard we were looking at them,” commented Neale Mace, Managing Director of EI Productions. “This was a complex show with lots of lighting, moving staging, pyro flames and the Ghibli’s were being relied on to provide much of the lighting’s punchy looks.

The Ghiblis were all flown across three trusses and Neale remarked that they looked incredible! He also said that after having seen this show, he had never seen an LED based fixture that is as bright as the Ghibli.

“They also have intense colours and can produce beautiful air / beam effects,” he added. “We didn’t actually use the motorised framing feature on this tour, but it’s great to know that we can also use them for front truss profile work when needed.”

EI Productions are always expanding their production inventory and after going to a couple of overseas trade shows and seeing the new Ayrton products, they decided to add some Ayrton Ghiblis. It was a bit of a longer decision process for them and they looked at several options to fill their requirements which was for an LED based spot / profile that had motorised framing shutters.

“There are a few options on the market, however, as we mostly have to comply with local and overseas lighting riders we needed a product that was going to be accepted, and right now, Ayrton is a popular brand and their products are being used on lots of shows,” said Neale. “We also have experience with the brand as we already own lots of Ayrton MagicBlades and they’ve been a rock solid product for us.

“As usual, Show Technology have provided amazing sales support in getting us demo fixtures and answering any and all of our stupid questions!”

The rest of the Parkway Drive rig featured Claypaky Sharpy, Mythos II, B-Eye K20, K10, Stormy CC and 60 x Ayrton Magic Blade-Rs and although that’s a lot of firepower, the Ghiblis cut right through, even in some of the rooms with higher trim height.

Out in the real world on a tour, the Ghibli’s have performed flawlessly every night and being trucked across four States and a Territory didn’t faze them a bit.

“The Ghiblis are amazing! There’s a lot to like about these fixtures and although this tour probably didn’t use all their features it certainly proved to us (and anyone who saw the show) that they’re a great light and I know we’ll be ordering more,” said Neale.

Parkway Drive’s LD Steve Granville was so impressed with the Ghiblis that he changed his spec for the next tour he was lighting (Gang of Youths Australian Tour) insisting EI Productions provide him with Ghiblis!