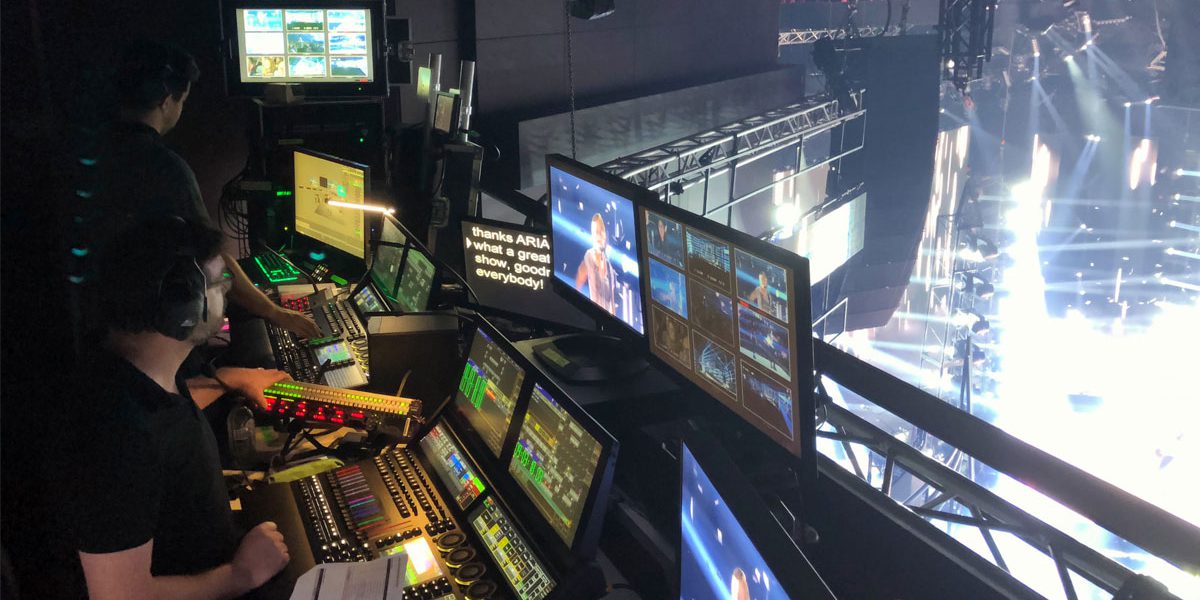 Once again The ARIA Awards were held at The Star in Sydney with lighting designer Paul Collison(PC) using in house gear as well as a massive amount of gear from Chameleon. With each act requiring their own floor package, there were more fixtures in total for the floor packages than the main rig!

The event saw the first major outing of Chameleon’s new grandMA3 consoles (a full-size and three gMA3 lights) although PC has been ‘field-testing’ the grandMA3 for quite some time.

“It was the first large scale show that I’ve done that was completely run on grandMA3 control hardware,” commented PC. “I’ve been running the grandMA3 hardware for some time but always with grandMA2 hardware backing it up. We were confident the new hardware would be up to the task and it was. From a lighting perspective, the programming and show ran particularly smoothly.”

Justifying using the new hardware, PC explains “grandMA2 mode allows you to get used to the geography of the console so when you start to learn the grandMA3 software, you’re not searching for buttons or confused by the layout. It also means you get to take advantage of the new buttons, encoders and screens which are simply beautiful.”

The grandMA3 lighting control consoles offer a fresh user interface with an optimized command section for intuitive and fast access. It features dual encoders, which provide users with intuitive control of additional features and functions. Feature-mapping of the dual encoders is customizable, facilitating ease of use and faster programming.

The grandMA3 software has an elegant new system-architecture incorporating new fixture, feature and effects-handling at its very heart, designed to make practical tasks more intuitive. Though not show ready just yet, Version 1.0 is not far away and users can already see the progress in the preview releases of grandMA3.

Selecting fixtures, adjusting values, storing presets and playing back cues all feel familiar, but improved in many details of the process. Added to that, is a long awaited Mac OS version and the exciting new compact surfaces, plus new nodes and a beefed up command wing.

There were four grandMA3 consoles on the show: three grandMA3 lights and a grandMA3 full-size. In control of the grandMA3 lights were Jarrad Donovan (operating moving lights), Stuart Anderson (lighting director for white light) and Adam Smith (running the disguise media servers).

‘Every one of the operators on the show loved the grandMA3 hardware and are not looking forward to going back to using grandMA2 hardware,” commented PC.

As well as lighting the nine performing acts, the actual lighting of the Aria Awards, is a big task and this year Martin MAC101, MAC Quantum Wash, ShowPRO EX36 wash, ShowPRO LED PAR, Claypaky Sharpy wash and Super Sharpy were all used. The LED set treatments that ran down the side of the room also generated a lot of light.

Onstage, PC had 66 of his new favourite lighting fixture, the Martin Encore Performance CLD, which supplied the main keylight for the show.

“We also used them as traditional moving lights and it was really nice having such a high quality light source from several angles, as it meant we could keylight reverse shots really easily without seeing a colour shift,” added Paul. “They are beautiful lights, in fact the quality of light that comes out of the lens of the Encore is simply stunning. They are now my go-to light for a whole lot of productions. They did a stellar job and were awesome.”

Also onstage were 56 x Ayrton MagicBlades which PC described as a good, fun fixture that delivered a traditional wash as well as a few effects.

“I was very happy with the MagicBlade as a filler light and they were surprisingly versatile,” he said. “I thought we’d be locked into a few clichéd looks but we managed to wrangle a few looks out of them that I wasn’t expecting.”