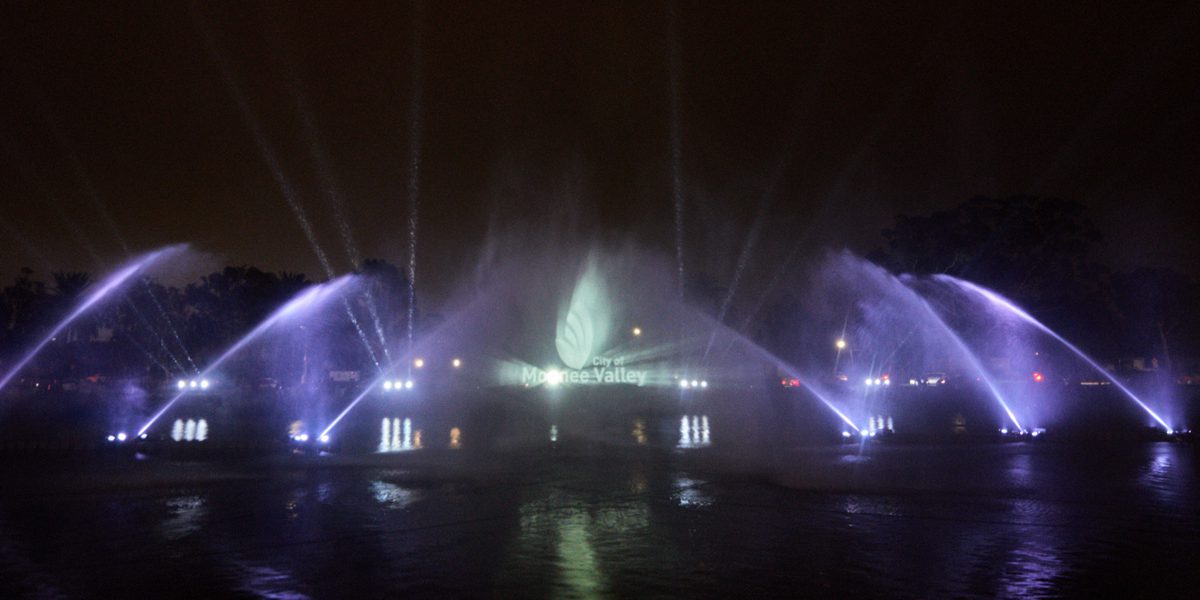 The Moonee Valley Festival was spread across many events in the Moonee Ponds area over February and March with local culture, performances, art and food, culminating with a water spectacular named Illuminate the River on Saturday 30th March 2019.

The main show revolved around the custom soundtrack created especially for this event, defining the style and emotional journey of the story. From the time-coded soundtrack, all elements were conceived and storyboarded: water fountains, water screen and projection content, laser light show, audio voice-overs, lighting show and flame bursts culminating with an immersive experience that filled the audience with delight.

Crucial to the design were Nextgen’s 12 Claypaky Mythos 2 whose versatility, compact size and high output made them ideal for the project. Mythos 2 is an excellent spotlight, which produces an outstanding large light beam.
“With their amazing output they were able to provide a solid background to the 20K lasers used in the show,” said Guy. “They also really punch through the pyrotechnics! The colours and beams were carefully co-ordinated with the dynamics of the music and the lasers. The Mythos 2 offers unrivalled flexibility and with the new reliable lamp and improved dimming it goes from strength to strength.”

The Mythos 2 features an advanced CMY colour system on three gradually fading colour wheels, 15 colour filters on three wheels, two CTO filters and one CTB filter. Guy also noted how impressed he is by how crisp, accurate, and flat the optics are with the Mythos 2.

“The optics in the fixture are amazing allowing the creation of multiple different looks using the beam/spot mode as well as the frost,” he said.

Fortunately the Mythos 2 were housed in Claypaky Igloo water-proof domes as the rain was torrential throughout the weekend.

Control was by an MA Lighting MA3 plus two command wings supplied by Michael Zagarn. The entire event was time coded with the fountains and lighting triggered through the MA platform.

“We created a network to include redundancy and the programming of the fountains was easy using the inbuilt macros in the MA3,” added Guy. “The reliability of the MA platform was paramount in an event like this because once you press to GO button, there’s no stopping or intervention for 20 minutes.”