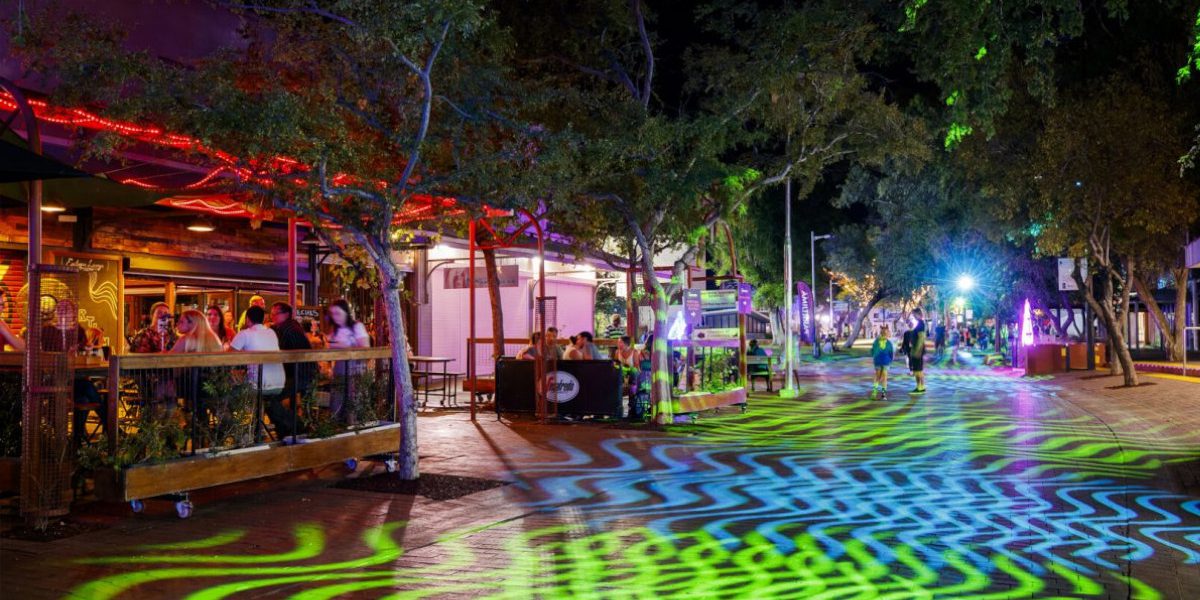 Parrtjima – A Festival in Light, held every year in the Northern Territory, is a spectacular world of light and sound where contemporary and traditional Indigenous stories and artwork are brought to life under the night sky on an unprecedented scale.

This year, for the second time, as well as illuminating the MacDonnell Ranges and Alice Springs Desert Park, Parrtjima reached out into the streets of Alice Springs reinvigorating Todd Mall at night. The Mall was transformed by a symbolic ‘river of light’ flowing along the ground where, each night, the river reveals symbols of gathering, campsites, waterholes and rivers – important symbols of the local Arrernte people.

An array of beautiful textures, and patterns and colours throw light across the street and surrounding trees using 36 ShowPRO EK Aurora Exterior LED projectors. The perfectly synchronised lighting patterns are all carefully designed to represent Alice Springs and the Arrernte people through the medium of lighting projection.

The project was the work of Mandylights who had to explore various methods of installing the equipment.

“As the Mall has dozens of individual land holders trying to rig gear of buildings wasn’t an option,” explained Richard Neville, Managing Director of Mandylights. “We decided to design a lighting treatment through the Mall that could utilize the existing street light poles. We looked at a bunch of different products including Show Technology’s ShowPRO Aurora Exterior outdoor rated IP65 LED projector.”

Unlike the rest of the Parrtjima installations, this install will remain for six months. As Alice Springs is rather remote, out of range of normal service calls, the fixtures needed to be reliable and rugged and the system had to be as simple as possible.

“The value for money offered by the Aurora is absolutely incredible,” remarked Richard. “They have a massive zoom, a couple of colour wheels, an animation wheel, rotating gobos, frost and prism – really they have every feature you’d expect in a moving light and all in an incredibly rugged outdoor package.”

Mandylights employed a local engineering firm to manufacture mounting brackets to fix the Auroras to the existing street poles. As the Aurora features a 10°- 40°motorized zoom they only had to be mounted between 4.5 – 5.5 metres above the ground to get the coverage desired.

“That was a big deal for us because many architectural fixtures don’t go anywhere near that wide,” said Richard. “They are also incredibly punchy, one of the conditions of the installation was that none of the existing security lights could be turned off or dimmed in anyway. The fact that the Auroras can cut through the exiting lighting, even when in blue or red, is pretty amazing.”

As the Aurora Exterior features onboard Wireless DMX all the communications could be wireless which meant that Mandylights didn’t have to add any major infrastructure to make the installation work and it all took only two days to install.

“W-DMX is ridiculously simple,” added Richard. “We programmed all of the lighting states onto a Nitec DMX recorder, which I think is one of the most under rated products that Show Technology have. For a couple of hundred dollars you get this DMX recorder and Show Store unit that stores and playbacks up to eight shows as well as snapshots. It has a calendar function for scheduled playback at specific times and dates. In Todd Mall the Nitec Recorder runs the Auroras black during the day, resets them before they start their nightly program, runs them through their looping show state and then we programmed them to run in open white, full flood for the rest of the night to add to the safety lighting.”

Over a year on from the initial install and the Auroras are still chugging along performing their duty night after night. The main street of Alice Springs is probably one of the harshest environment as it gets down to near freezing at night and then up to 40°C in one day. One Aurora also took a full bottle of Coopers Ale but did not miss a beat!