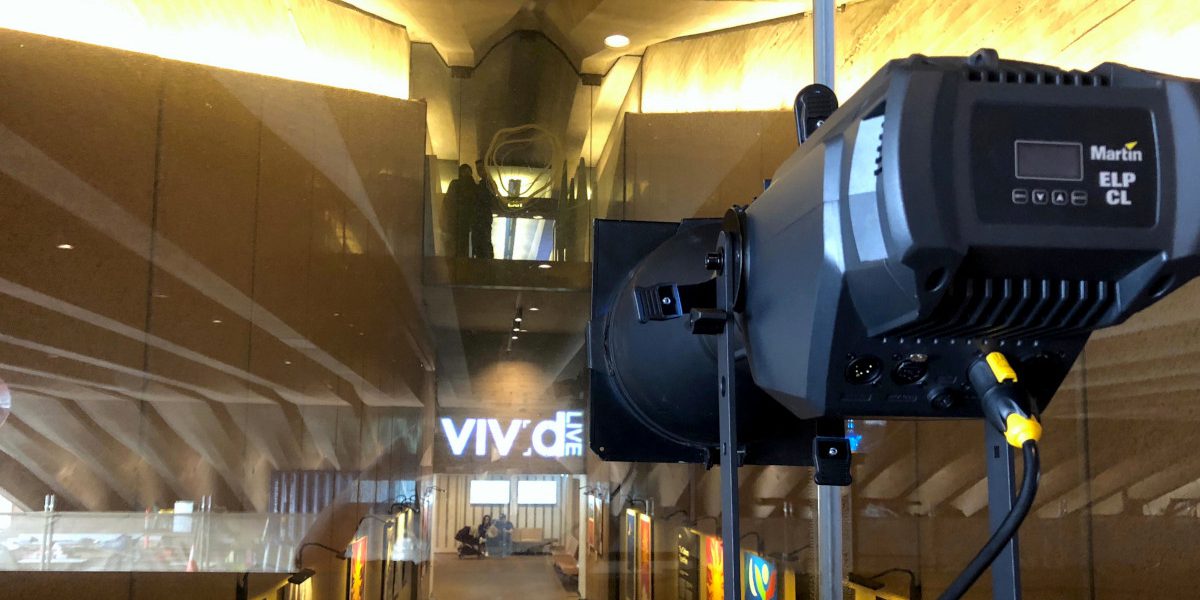 It’s not often we devote an entire article to the use of just one fixture … but then again the Martin ELP CL (Colour) LED ellipsoid fixture is an extraordinary product! You may think it’s just another Profile but, as Paul Collison explains, it has so many little features that make it a pleasure to use.

As part of Vivid Live Festival at the Sydney Opera House, in conjunction with Vivid Festival, the public areas of the Opera House are spruced up with light, colour and gobos, all in aid of a more contemporary feel, to go hand in hand with the music festival. However the Western Foyer entrance is a challenging area as there is nowhere to rig lights with only the lip of an awning outside of the glass from which to project.

“In recent years we used a MAC700 because it had the punch to throw the required 20m and the necessary beam angle,” explained PC. “This year however, it occurred to me that there was no reason why we couldn’t use a Martin ELP is this position thus dramatically reducing power consumption.”

It wasn’t until PC actually arrived on site with the Martin ELP that he realized another great benefit to choosing that fixture was its internal sequencing engine.

“It meant I could put in 26 different states, set the transition and delay times between each of those states and I didn’t require a dedicated controller as in previous years,” said PC. “We just had it on a timer so it switched on and off at the appropriate times and away it went! We were very impressed by the software inside the ELP that allowed us to do that.”

ELP fixtures offer 16-bit dimming with four selectable curves and 26 colour presets that match industry-standard colour filters. They can be configured with one of four Martin lens tubes in 19, 26, 36 and 50-degree beam angles and are compatible with third-party lens tubes along with a wide range of accessories including gel frames and gobos for flexibility in lighting design and inventory management.

“We actually wanted a 10-degree lens so we used an ETC lens which fitted perfectly,” added PC. “It was great to be able to utilize other standard accessories on the fixture.”

PC remarked that he has been a fan of the Martin ELP ever since he first laid eyes on one, saying that Martin has definitely hit the mark in terms of brightness and features.

“It’s the little things they have done within the software that also impress; being able to walk up to a fixture, even if it is being DMX controlled, hit the enter button and it jumps to full output. You then have 60 second to focus the unit before it returns to DMX control,” commented PC. “You don’t have to chase down a console operator to bring the fixture up to be able to focus it. The ELP has lots of little subtle features like that which are very appealing.”

In fact the Martin ELP has the industry’s first gear-driven Fine Focus and Fast Focus for data-free focusing. Fine Focus adjustment lets you lock focus exactly where you want it, instantly. There’s no refocusing, no drifting and no slipping. The innovative Fast Focus feature (as mentioned above) brings the fixture to full output for 60 seconds with or without data running to the fixture.

The Martin ELP CL delivers the class-leading luminance, output and vivid colour rendering that you’ve come to expect from Martin. PC states that their quality of light is exceptional and as such, he has started using them as keylights in a broadcast environment where they sit very well with other Martin fixtures such as his favourite, the MAC Encore.