Claypaky, Ayrton and Prolights cast a HALO over Townsville 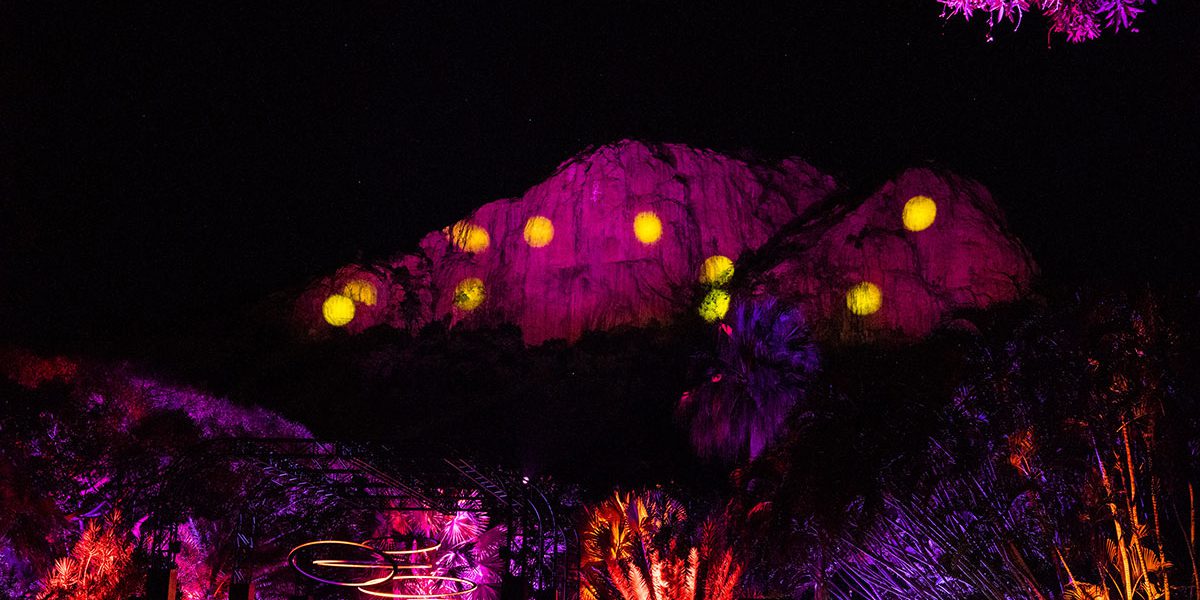 After months of anticipation and secrecy, ‘HALO’ – the light and sound experience designed specifically for Townsville has finished.

Created and produced by Sydney-based AGB Events, HALO was a spectacular experience of massive proportions that transformed Castle Hill, the natural ‘halo’ that hovers above Townsville. Presented by the Townsville City Council, HALO ran in conjunction with the inaugural North Australian Festival of Arts, and has been made possible through the generous support of the Australian Government’s “Building Better Regions Fund”.

“HALO is a new event experience that showcases creativity in one of the most aesthetically compelling new art forms; light art,” said Anthony Bastic, CEO and Creative Director of AGB Events. “Over the past decade, the light art movement has captured the attention and imaginations of many people around the world. This new movement in art has allowed lighting designers, artists and technicians to experiment with the latest advances in technology and create experiences that are compelling, spectacular and memorable.”

There were two elements to HALO: the Castle Hill Light and Sound Show, and the illumination of Queens Gardens. Castle Hill was lit up with a dramatic light and sound show for five minutes, every 20 minutes. Queen’s Gardens was a focal point for HALO, and the prime viewing point for the Castle Hill show. The Gardens were also the location for theatrical lighting treatments including tree lighting, using colour-changing LEDs, and the HALO ‘chandelier’.

AGB’s Lighting designer for the event was Toby Sewell, with Chameleon Touring Systems supplying gear and crew. The site was within residential areas so the first major challenge was where to place the lighting towers in order to light the hill effectively.

“We wanted two positions at the base of the hill, which were relatively easy, but then we needed two further away to get a flatter shot,” said Toby. “We commissioned custom gobos for the project so I needed to get a flat shot without too much beam variation. We worked with the council, who were fantastic to deal with, in securing those positions about another 400 metres away. Getting bright enough fixtures or enough fixtures on top of a relatively small footprint of a tower was our next issue. The furthest towers were nearly 800 metres away and you then had to deal with the elevation of 300 metres as well.”

Toby decided that the Claypaky Scenius Unico were the ideal fixture for such a long throw deploying 18x and together with 28 x of Chameleon’s brand new Ayrton Perseo-S, they did the majority of the lighting.

Perseo-S is Ayrton’s first compact multi-function luminaire with an IP65 enclosure rating and for this project 11 were located on each tower close to the mountain with the remaining six located within the gardens.

“The Perseo-S were awesome!” commented Toby. “They provided a really solid depth of colour and good diversity through the two gobo wheels, plus we used the animation a fair bit, and the shuttering is great. We also used the shutter mechanism of the Scenius Unico a lot either swiping across the mountain or scrolling colour up or down. Their animation worked really well too.”
Prolights Panorama IP-rated fixture played an important role with 28 x Panorama Beam and 14 x Panorama Wash effectively deployed.

“I knew the Panorama Beams would cut through being a 2 degree beam light,” added Toby. “That was always going to work, but it was whether or not we could get decent coverage for a wash and gobo effect. The Panorama Beams were the workhorse of playing with texture and pattern on the hill. We could also get a decent wash out of them we used the linear prism and layered them on top of each other to create a nice soft wash over the mountain.

“The Panorama Wash which were great but we could have done with more! I could create a highlight with saturated colours on either the top or the bottom of the mountain with them and occasionally pick out certain areas with them.”

In the gardens 30 x ShowPRO LED EX36 Floods were used to light up trees and 16 x ShowPRO FusionBars were used to light up the front of maze thus adding another layer of colour.
AGB also engaged Adam Smith from Silver Bullet Productions to programme the light show on an MA2 light console, with timecoded track and control via two MA2 light consoles. The show was set up as a recurring 20 minute loop.

HALO is not just about light: the shifting patterns and colourscapes were enhanced and given even greater power by a soundtrack commissioned by AGB Events and especially composed for HALO by electronic music and media production specialist Nick Wishart.