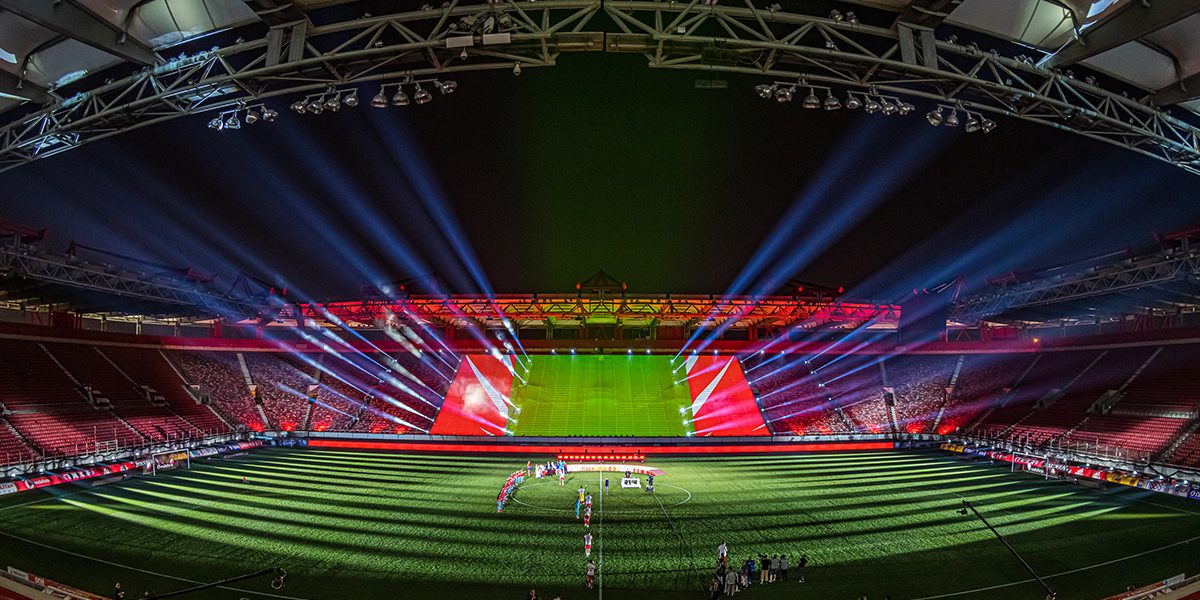 Greek football club Olympiacos celebrated the 45th championship title in its history by sending a message of hope and optimism to its supporters in Piraeus, all of Greece and around the world. A spectacular televised show, filled with light and music, was staged in the empty G. Karaiskakis Stadium where the team demolished a coronavirus pandemic “wall” and fans joined players virtually to raise the championship trophy. Claypaky Mythos 2 fixtures contributed to this “Lights of Hope” ceremony and its theme of overcoming obstacles to emerge triumphant.

George Tellos, Lighting Designer with Lighting Art Athens, was responsible for the programming and lighting coordination for the show. He selected Claypaky Mythos 2 fixtures over two other moving light candidates for their performance across long distances. “I was astounded by them,” he says. “I had seen them used at the Super Bowl, but it was impressive to witness them live. The Mythos 2 combines brightness with compact size, reliability and great optics.”

Tellos notes that the lighting design aimed to create “an exceptional televised result. The stadium was empty except for the champions who stood on the crescent-shaped stage in the middle of the court. Our lighting design team took into consideration – in fact took advantage of – the fact that the stadium was empty. This rare occasion gave us the opportunity to install lighting fixtures on the spectators’ vacant seats. We were very grateful for the extraordinary opportunity to illuminate the stadium in this way.”

Tellos and his team mounted the Mythos 2 around the stadium at great distances from the field. The versatile fixtures served as key lights and backlights and provided field textures, stand textures and aerial effects.
Local supplier Tempo Events supported Tellos and his team taking “great care” of them during the course of the show, he reports.

“Lights of Hope” was “a unique experience due to the fact that it took place in the midst of a pandemic,” Tellos notes. “Many things may be different by the time this crisis is over, however, the Lights of Hope will always exist and shine.”

Asteris Koutoulas was the Artistic Director for “Lights of Hope.” At Lighting Art Athens Makis Anastasakis was the Lighting Programmer/Operator and Irene Samartzi the Lighting Coordinator