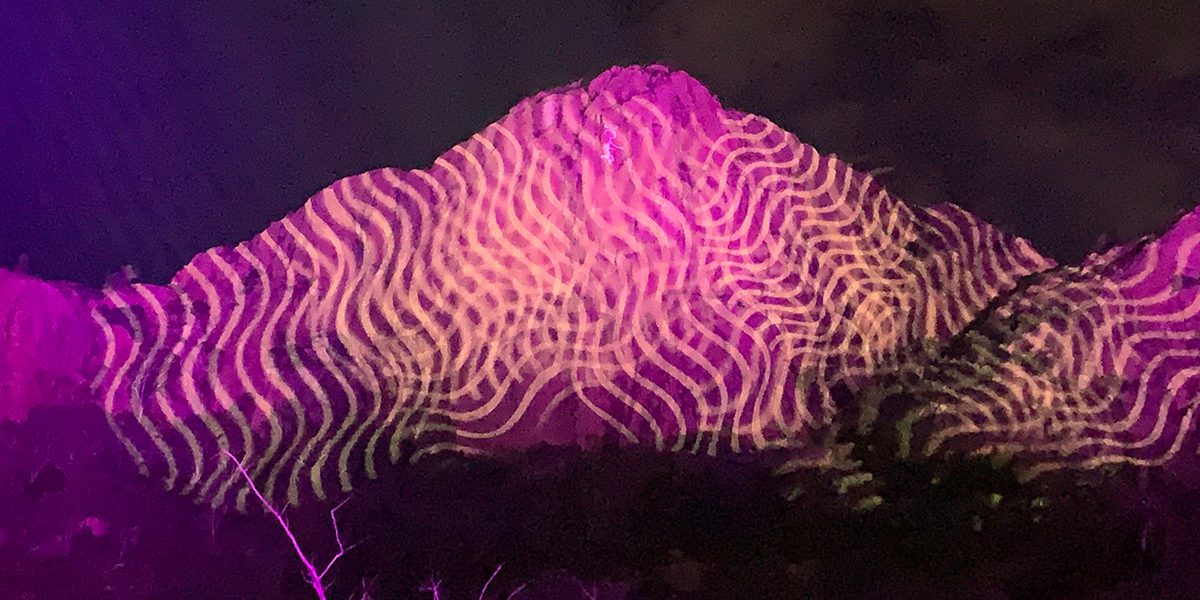 Townsville’s light festival HALO had been such a success after its inaugural year that the Council decided to install permanent lighting and projection onto Castle Hill.

Initially, the idea was simply for a colour-changing wash of Castle Hill which would require two lighting towers to adequately wash the façade.

“I started researching fixtures that would be bright enough and have a narrow enough beam angle because we’re throwing about 450 metres to the rock face,” said Toby Sewell of AGB Events. “We eventually found the new ShowPRO Architectural Fusion 48 exterior fixtures with an 8-degree lens which is the narrowest I could find within the price range.”

The result is twenty ShowPRO Architectural Fusion 48 on each of two towers and from there they bathe the entire façade of Castle Hill in colourful lighting. As the fixtures do not have a central yoke bolt hole, Show Technology specified custom metal brackets which enable the fixtures to be mounted on the light poles and then focussed as required.

The Council then decided that they would like to add some patterns to the mix and so nine ShowPRO Aurora IP65 XL outdoor rated IP65 LED projectors with zoom and framing shutters were chosen. With smooth gobo and effect rotation even at extremely slow speed, motorized focus, iris and linear 6°-48° zoom, these were the ideal fixture.

“The new Aurora IP65 XL has CMY colour mixing which I was very keen to have,” commented Toby. “You never quite know how everything will look once it is installed but I was pleasantly surprised by the output from the Aurora IP65 XL. They were competing against forty wash lights but we found the correct dynamic balance between the intensity of the wash fixtures and the output of the Auroras. We used the animation and rotating gobo effects a lot in our programming to deliver a variety of looks over the course of the ‘show’.”

Whereas the HALO festival show is based around a soundtrack, this nightly show runs for twenty minutes which means twenty minutes of looks are required.

“Twenty minutes is a long time when you’re trying to programme something static so I tried to find diverse and interesting segways from one scene to the new look,” added Toby. “It was great to have Clint Dulieu programming the console so I could effectively work with the image in my head and he could then create that for me.”

Wireless Solutions W-DMX is used to wirelessly link the two towers and the show is run via ELC Showstore which allows the show to switch on at 7pm in the summer and 6pm in the winter.