Icons of Dance for Icon 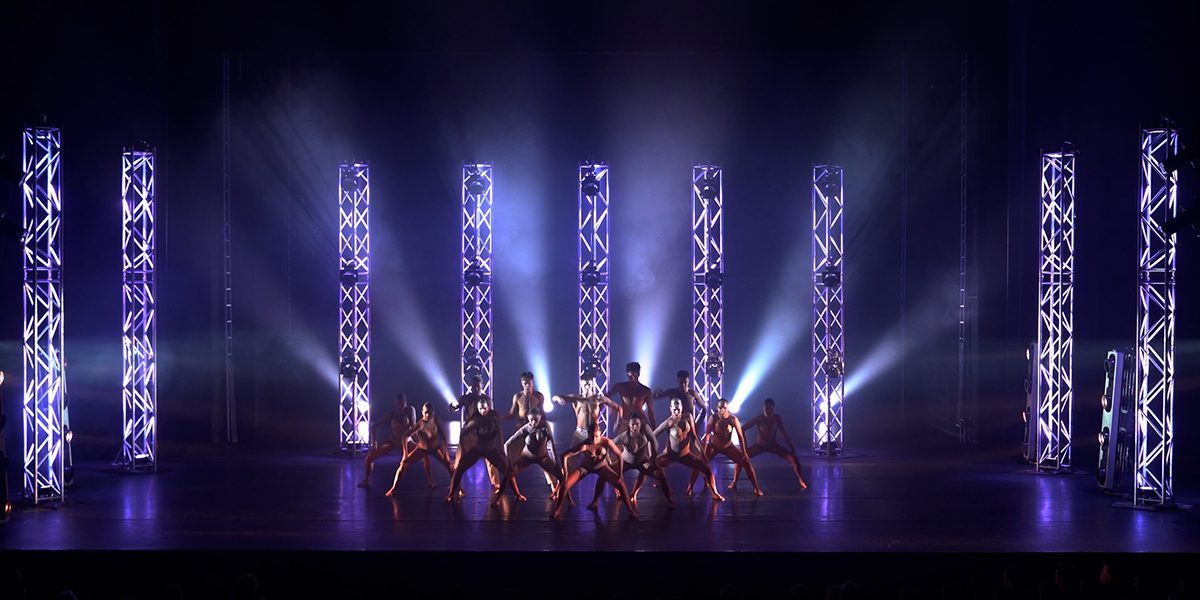 The Dream Dance Company returned to NIDA in May with an action-packed show choreographed by one of Australia’s most exciting choreographers Paris Cavanagh. Entitled Icon, the work explored the future of dance and music, with an electrifying cast of dancers.

Lighting designer Darcy Cook and director Marko Panzic got together over some quite nicely cooked scrambled eggs somewhere in Alexandria one day and brainstormed some ideas.

“We wanted to make the NIDA stage feel different, so the first thing was to open it out,” remarked Darcy. “We decided to remove the sound wall and majority of the stage legs to create one big open space. Then we entertained the idea of doing some fancy Kinesys rigging with a big cube but felt it wasn’t quite suited to the show. We needed something to divide the space and make it not feel too empty so I came up with the idea of plonking several Global F44 truss towers around the stage. That broke the space up nicely.”

Darcy was keen to create a design that the dance community hadn’t seen in a dance performance before and to make the Parade Theatre feel as un-Parade Theatre like as possible.

“However, my biggest challenge was remembering if the cable list I sent was accurate,” he added. “Apart from that, getting the timecode for the 400 something cue show to be perfect to the frame is always a fun challenge. Especially with some of the intricacies from a musical or chorographical perspective.”

The nine reasonably high truss towers surrounding the stage was the only set on a stripped back and bare NIDA stage. These were warmed with ShowPro Quad 18s to use at various instances during the show. Darcy did light the rear wall during one particular routine which gave an empty warehouse feel to quite an emotive piece of work.

“I’ve always had a soft spot for the MAC Quantum Profiles,” commented Darcy. “They are a speedy little fixture that are punchy enough to work in a theatre environment. These were perfect for an overhead fixture that had the required feature sets from a 10-metre trim height. MAC Vipers are my go-to for sidelight. Bright, wide and have a great set of gobos to project onto the bodies of the dancers. MAC Auras have been one of my favourite basic wash fixtures for a while now, so I threw a bunch of these on truss uprights for backlight, silhouette and general lighting effects.

“I wanted to add something as a special effect that I feel doesn’t get used enough. I remembered using CS-4s several years ago and found them to be quite a cool, unique fixture. Basic, yes, however with some trickery in the programming, these added a bit of flair to the light show. As with any special effect, using them sparingly and thoughtfully can really add a new level to a light show.”

The show was programmed on Darcy’s trusty MA2 light in his home studio using L8. It was quite a complex show to program requiring a lot of thought into how each cue is best executed to achieve maximum impact. The show was run off his new touring QLAB system that boasts an automatic failover system. QLAB spat timecode into the console meaning Darcy was able to press a green button to trigger the entire show and actually sit back and enjoy the show as a whole.

“There were quite a few moments in the show that I enjoyed,” he said. “There is something to be said for having lighting accents execute in perfect time to hits within the music or choreography, but also there is something about really moving orchestral pieces that have heavy use of nice gobos. But one of my favourite looks was pointing MAC Auras through their truss uprights and hitting the back wall creating an interesting background of differing light intensities through various objects. It accentuated depth without making the stage feel too enormous.”