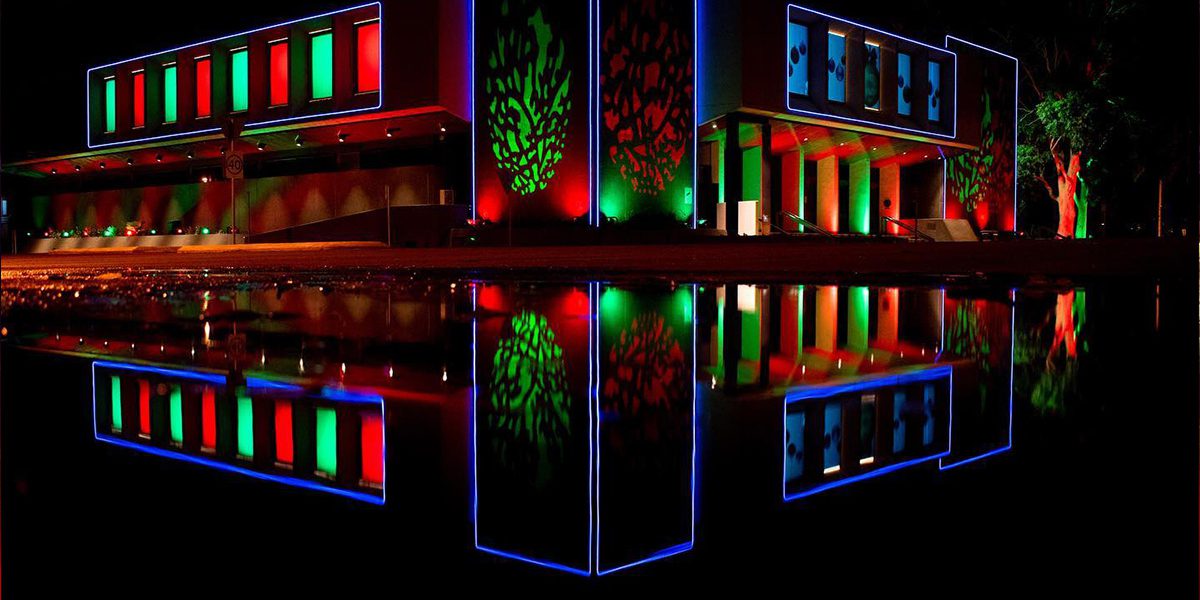 Broken Hill Mayor Darriea Turley said the installations would add a new level of vibrancy across the city once completed advising “this lighting will ensure these key areas and buildings around our city are an attraction even at night.

“We can also use it to complement events and initiatives – I can imagine all our prominent spaces being lit up green for St Patrick’s weekend, or in Christmas colours for the festive season.
“It will add a whole new element to the city after dark.”

After winning the tender, Mark Hammer and Matthew Tunchon of Silver Bullet Projects provided a turnkey solution to the Broken Hill City Council and Mayor Turley said the Silver Bullet Projects team tasked with the installation “had done a great job under difficult circumstances” referring to COVID-19 stoppages.

Although the Civic Centre does not have a heritage listing, it got to join the party too and became a focal point of the project. Uplighting, front lighting, gobo options, internal lighting and rear projection onto windows were all included.

“For uplighting, we used 29 x Studio Due Terra Plus-T RDM RGBW with varying lens options,” explained Mark Hammer of Silver Bullet Projects. “The variety of lenses ensured we got the angles and beam dimensions correct, whilst eliminating light spill, to comply with AS architectural rules. We had to work through this for every space that we lit. The colours and the throw from the Studio Due Terra Plus-T were fantastic. We also had a dozen on the Town Hall façade.

To light the windows from the interior Mark chose eight ShowPRO LED FC Profiles and he was impressed by the result.

“We needed a fixture inside that delivered many colour options whilst not being too obtrusive,” he said. “The positioning of them was important so they were up and out of the way. The room is a multifunctional corporate space with dividing walls that they move around so it made programming fun!”

A total of 33 x Martin Exterior 110 Wash provided the fill-in colour washes on this building as well as the Town Hall façade with Mark commenting that the Martin Exterior range of fixtures offered some really useful options for the different applications.

“We’ve been involved with this range of products in maritime installations and they were ideal for use in the Australian outback weather conditions,” he added.
As for the 11 x Prolights Mosaico XL, Mark says they are sprinkled around the different venues to suit. Some are used for front lighting with their shutters keeping the beams under control and some project gobo patterns onto walls.

“The Prolights Mosaico XL comes with some great features,” added Mark. “I was fortunate to visit the Prolights factory and this was where I first came across them. I thought they were amazing. It’s closer to a theatre fixture rather than an outdoor fixture that just throws a pattern on the wall.”

A total of 41 Prolights ArcPOD8 FC feature in the project with eight at the Broken Hill Regional Art Gallery, five on the Town Hall façade and 28 x deployed in the Town Square where they are positioned in groups of two or four on poles from where they can create pools of light on the ground.

“The Prolights ArcPOD8 FC is really good and is similar to a mini version of the ShowPRO EX36 LED flood,” commented Mark. “They are a perfect size and have a great colour array that is smooth and consistent.”
At Sturt Park three ShowPRO Aurora Exterior LED projectors cast gobos onto tree trunks whilst eight Martin Exterior 210 Wash lit the actual tree.

Most of the locations used Wireless Solutions W-DMX as cable runs were not always possible.

The light show is scheduled to run every night from 7pm to 10pm and Mark ensured the council could control it simply via an iPad.

“We programmed all the lighting through the MA2 and then downloaded onto a CueServer Pro DMX lighting control system,” added Matthew. “We also have a video component so there are media servers that are triggered at the same time.”

The installation has opened up a whole new level of creative control for the council. The council staff can update content and scheduling and include looks to celebrate town events and theming.