Martin Shines in the Spiegeltent 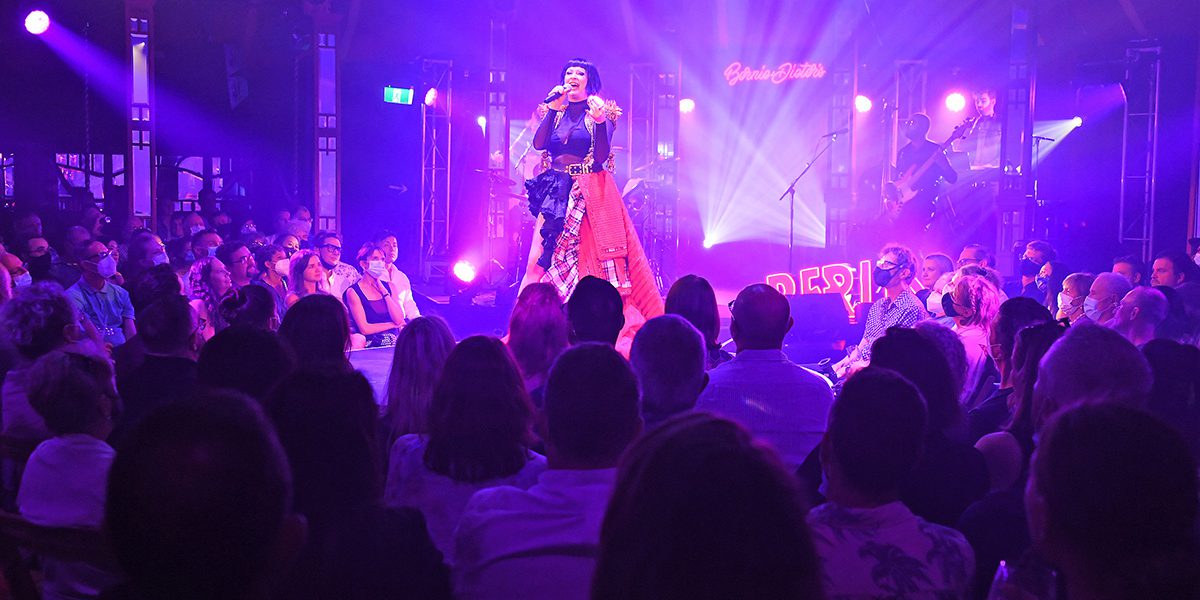 Direct from London’s West End, Bernie Dieter brought her infamous troupe of bombastic Bohemians to Sydney for an unmissable night in The Famous Spiegeltent.

The main brief for lighting designer Darcy Cook was to make sure that Bernie and the Band on the main stage plus the act on the circular thrust didn’t feel separated.

“This can be a tricky balance but it’s ensuring that what happens behind the band is also matched to some extent on the thrust,” he explained. “We do a lot of backlighting on Bernie to close the gap between the two locations to reduce any feeling of separation. Apart from that, and one or two key acts within the show, I was pretty much left to my own devices when programming this.”

Darcy wanted to push the boundaries of what has previously been done in a Spiegeltent and with this show in particular. So when it came to designing it was a blend between traditional cabaret-style lighting design in some places, and using his background in lighting dance performances by projecting light onto the bodies of performers and trying to emphasise the contour of the performers.

“There were a few challenges to think of – primarily, giving all audience members an enhanced experience,” noted Darcy. “Because we’re effectively set up in the round, it was crucial that people seated to the left and right of the Thrust, still got the same visual impact looking across the room, as those who were seated in the front section. Then there was the size of the room. Due to short-throw distances, I relied a lot on using a fixture’s prism and gobo morphing features to maximise beam size and effectiveness.”

Darcy chose a Martin rig supplied by ei Productions including MAC Quantum Profiles due to their small size and feature set and MAC Auras for their great colours and ability to wash a stage from a short distance.

“I also have MAC 101s for punchy beam and these are used for accents and as a special effect,” he added. “Then I got the pleasure of using the Martin ELP CL which is great for filling in with colour or for face light with the seamless colour temperature control.”

Darcy programmed the show on his MA Lighting MA2 light via L8 Trace as he was able to sit in the comfort of his home office, watch videos and generally do his thing.

“This meant I was able to walk into the venue with a lighting design that only required a few minor tweaks as Tech rehearsals progressed,” he commented. “Due to the ever-changing nature of the show, it is impossible to run off timecode, so there is a cue list with some 400+ cues that I’ve had to memorise and trigger manually.”

Asked about his favourite lighting moment in the production, Darcy says the one that sticks out for him is during a piece called Cracked in the Mirror – a very moving ballad where midway through it turns into this spacey, slightly techy piece of music.

“At which point all lights drop and allow the MAC Quantum Profiles to shine,” said Darcy. “It took a bit of experimenting, but by utilising multiple gobos, gobo rotation and facet features, the whole room looks as though it’s been projected onto, and you’re looking into the lens of a projector. If you look at the body of the aerialist on stage, you can see patterns of light appear to ‘snake’ their way around his body. It’s a very cool, very moving piece of work by all parties involved.”