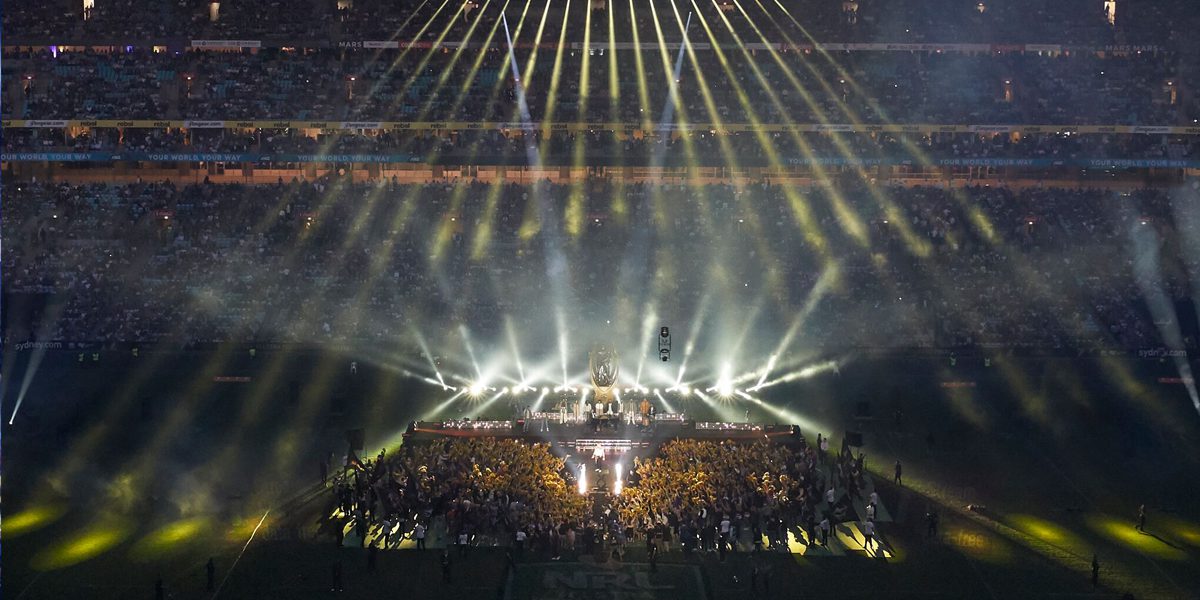 This year’s NRL Grand Final pre-show entertainment was provided by Macklemore with Tom Wright and Paul Lim of Additive once again providing a spectacular light show.
The rig included 32 x Claypaky Sharpy Wash 330 on the field behind the stage, 16 x Martin Professional MAC Vipers and 8 x MAC Viper Wash DX from flown trusses in the stands and on roll-in trusses, 18 x Mythos on the flown trusses and 20 x MAC Auras flanking the catwalk. On stage were 12 x Ayrton MagicBlade-FX, 44 x PixPads, 12 x LED Strips and four 4-lite molefays. Control was MA Lighting International with Chameleon Touring Systems supplying the lighting.
Tom was delighted to also have four Claypaky Scenius Unicos in his rig commenting that they were the brightest thing in the field!
“This year we wanted to do something a little more pop and a little more dramatic,” said Tom. “We decided to use three very linear structures: a very long truss in the air, another on the ground and the line of PixPads along the back of the stage. We also chose the Ayrton MagicBlade-FX for their linear shape.”
Adding some big beam lights on the stage allowed Tom to add an extra layer to the show and so he was delighted to have the Claypaky Scenius Unicos. Two Unicos were placed at the front of the catwalk with the other two placed at the extremes left and right of the other catwalk for back light shots.
“I didn’t originally have any way to do tight beams or gobos on the stage so it was great to have that ability,” he said. “At the end of the show I wanted a big backlight moment on Macklemore, as he was raised up on his stage lifter. The two Unicos from upstage fit the bill perfectly and gave a huge blast of white light. But these same units could fire out gobos, matching the rest of the lights on the field or I could focus them all right down and some big pencil beams coming out of the stage, they were very versatile.”
Tom remarked on the speed and responsiveness of the Unicos, adding that considering their brightness, he was pleasantly surprised to find the Unicos were reasonably light for all the feature that they contained.
“The beam flattener was really useful,” he also said. “There were times when I could tell there was a hot spot so the ability to get rid of the that and have it flat, was great. They’re incredibly quick on the zoom, I would often go from a big gobo look into a tight beam and it really was instant as was the colour changing.”
The dynamic output of the Scenius Unico, where they can go from a wide flood to a narrow spot, its colour temperature and flatness of field ensure that Additive Lighting would welcome them on any of their shows.