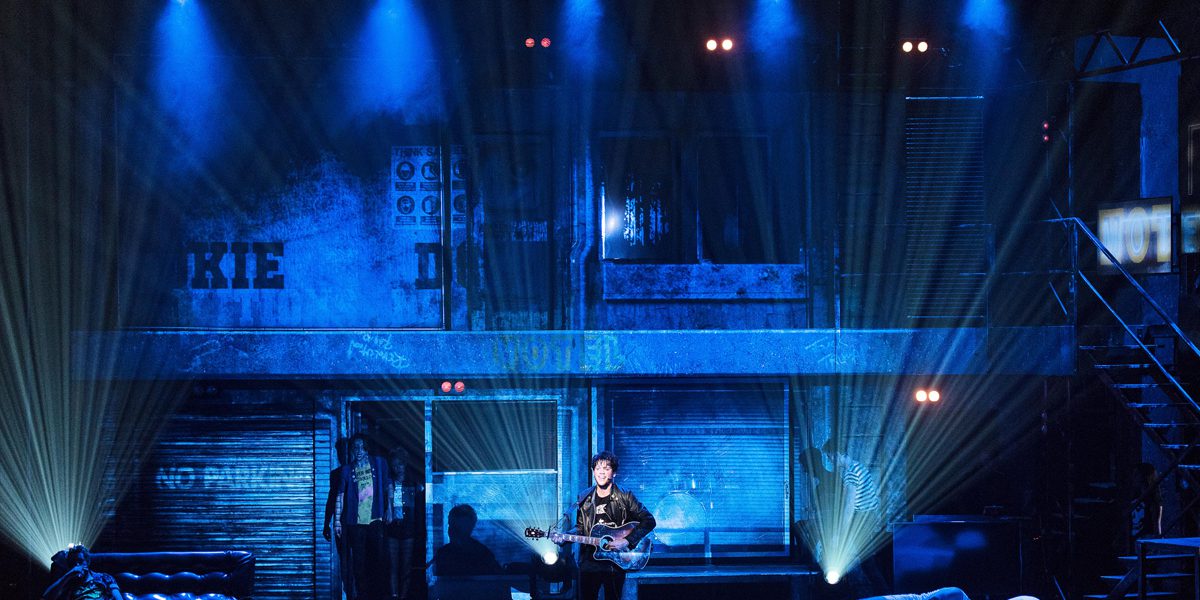 The lighting is a completely new design, as is everything else creative in the show, and Matt was keen to use one of his favourite fixtures – the Claypaky Scenius Profile.

“I love the Scenius, they’re so punchy and I still want to do some shuttering looks with them,” Matt said. “I have eight overhead along with seven Martin Professional MAC Quantum Wash complete with concentric spill rings which work really well as they take away the glare. I also added ten Sharpys for some big beam looks.”

Matt uses the Sharpys sparingly, and they don’t swing into action until a fair way into the show when St Jimmy enters, apt as he is the big rock’n’roll star.

Matt chose to use twenty ShowPro DreamPix LED Strips, mounted underneath the balcony and along the top truss top to form two lines, and he was ecstatic with their performance.

“I also build up to their use, in fact they’re only used twice during the show – I had to restrain myself!” he laughed. “I really like that they are so invisible until switched on.”

On the floor are four MAC Viper Profiles, chosen for the beam angle they deliver and the white light they emit.

“As it’s a rock’n’roll show I really wanted a piercing white and the Vipers do that very well,” commented Matt. “I also have four Claypaky Stormy CCs in the rig mainly for their whiteness.”

“All other trim heights stay the same on the road but the front truss does not,” added Matt. “I also really like the textures they can deliver, all through the show there’s hectic textured front light strobing away. I can also sweep the whole house with them, which I love doing.”

Twenty-one of the first Martin Rush MH6 Wash CTs in the country provide specials and Matt describes them as his little saviours in the rig, saying the colour range and warmth of the MH6 CT as very nice. Four MAC Aura dress the sides of the set with Matt commenting that he loves their dimmer curves.

“For an LED unit, they have such a theatrical curve to them,” he said. “They fade really beautifully. Three MAC TW1 and some Blinders provide a little bit of tungsten in the show.”

As the show is much more rock’n’roll than theatre, Matt switched the control from an ETC to an MA Lighting International grandMA2 light with a NPU MA and a Command Wing System complete with all-in-one touchscreen for backup.

“It’s just quicker to run a lot of the effects on the MA plus we’re using time code,” he explained. “There’s a lot of video triggering through the lighting console and 420 called lighting cues during the show so the MA system is perfect.”