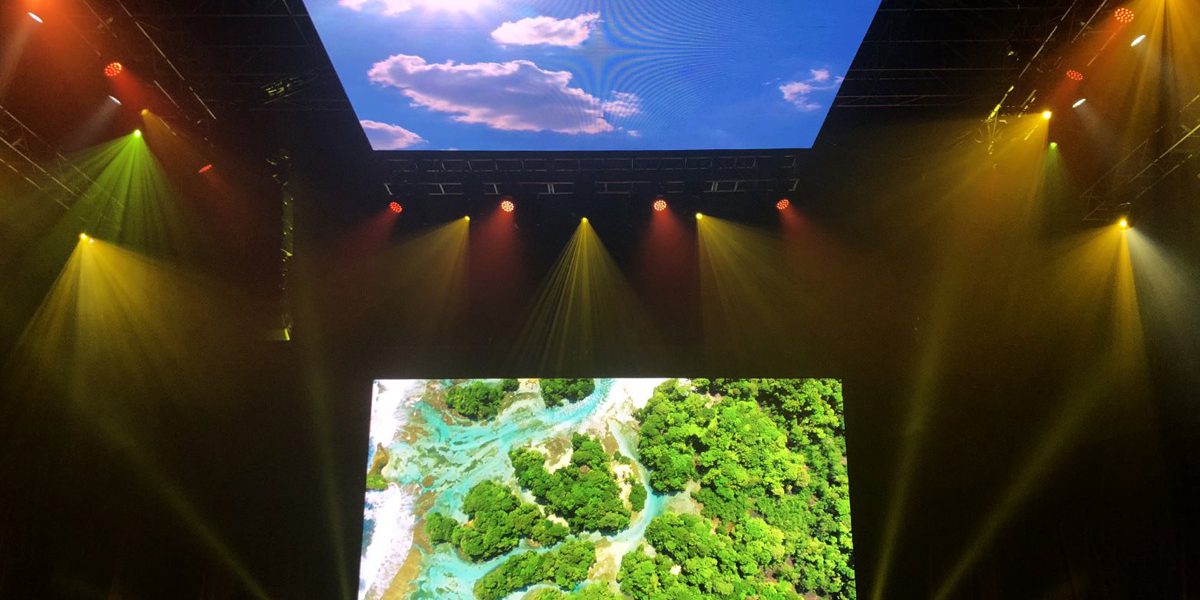 Australian television history was made with the launch of Foxtel’s 4K Channel at Sydney’s Fox Studios with the event produced by Zennacle and the lighting designed by Josh Moffat.
“It’s a good venue with lots of space, heaps of power and flat access,” said Josh. “Foxtel approached me four weeks out from the event with an idea that was quite small but after a couple of meetings, it grew into a large event showcasing their 4K content offering and the technology behind it.”
Foxtel’s new 4K channel – which will launch in October – is an Australian-first and is set to deliver next-generation TV to its subscribers making the most of today’s ultra-modern 4K TVs. It will also showcase documentaries, concerts and movies in razor sharp images and eye-popping colour.
With this technology advancement the tone was set for the event outside of Stage 7 at Fox Studios where Claypaky Sharpys performed searchlight sweeps of the night sky.
The entrance way into the space directed the audience to take a walk through television history with 18 televisions showing a variety of Australian TV content from as early as 1950. Dubbed The Evolution of Television, the entrance set the scene for the main room which focused on the next generation of Foxtel.
Martin Professional VDO Sceptrons were artistically arranged on the ceiling and walls of the entrance corridor where they directed people into the main room whilst adding a bit of sparkle. Claypaky Axcor 300s provided a white gobo look chasing above the Sceptrons and casting interesting shapes.
Dominating the main space was a massive 4K hero LED screen upstage and added to that was an LED ceiling and various 4K plasmas with side by side comparison of HD vs 4K signal. Josh’s lighting designed evolved around the LED ceiling and the lighting fixtures doing the main key lighting, as well as the gobos and texture in the room, needed to be punchy to compete with all of the LEDs.
“There was a lot of light in the space due to the 4K TVs and LED screens so I opted to use Claypaky Scenius because even once you’ve added a gobo and a bit of colour, they’ve still got a lot of kick,” remarked Josh. “We basically created a nice, relaxed and moody environment using Claypaky Scenius Profiles for big gobo washes and some Claypaky A.leda Wash K10s just to add colour and movement to the room. All of the key light on stage was done by Claypaky Scenius Unicos with a floor package added for entertainment act comprising Claypaky Sharpy Washes, Scenius Profiles and Martin MAC101s.
Martin MAC Auras run in crisp white highlighted the demo spaces for the new iQ4 boxes and 4K televisions.
Control was an MA Lighting International grandMA2 light, with Josh saying it was fairly straightforward with no time coding and just a bunch of manual cues for the presentation, performance and a couple of room looks.

Lighting was supplied by Jay Productions.