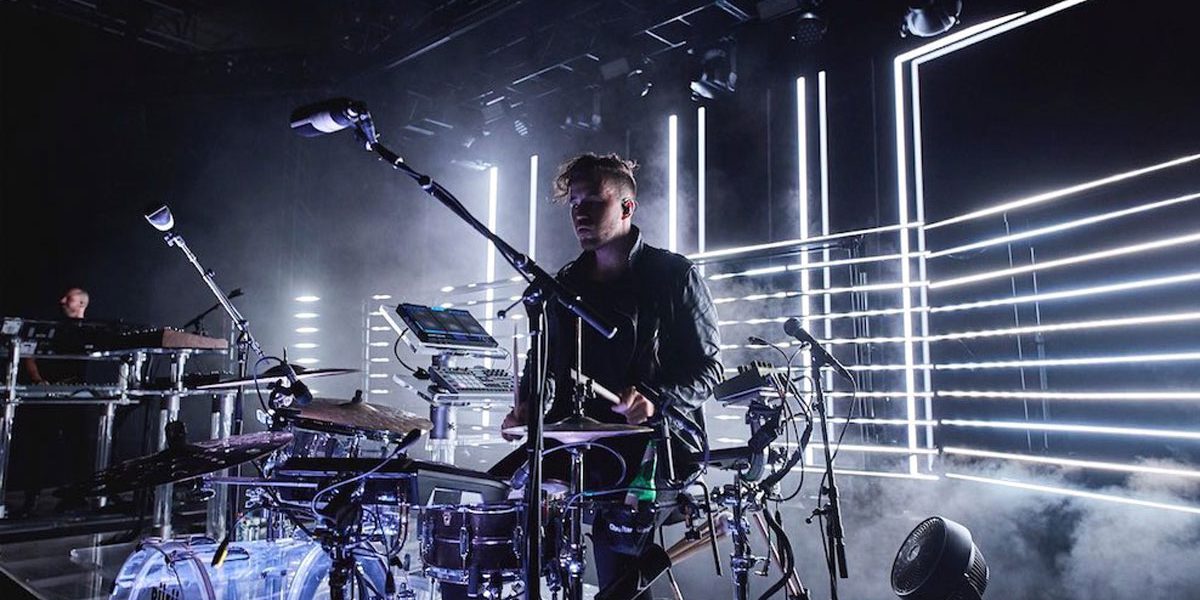 Sydney three-piece band RÜFÜS DU SOL recently toured Australia with their Solace tour which follows their rigorous two-years touring the world. In April they performed at the legendary Coachella Valley Music and Arts Festival for the second time.
This tour started in the US last October with show designer Matthew Smith, Senior Lighting Designer at Colourblind adapting the rig for the local tour.

To achieve a vibrant, memorable stage design for the tour, RÜFÜS DU SOL worked closely with Colourblind to create a dynamic lighting design centered around a striking LED grid backdrop. An enveloping back wall of 120 Martin VDO Sceptron 10 linear LED video strips, comprising four sections of thirty units was designed to cast the band into silhouettes. This was supplied by US hire company Brown Note Productions and was toured in Australia.

“Colourblind developed a design concept and worked with us to evolve it from the first drawing to what became the final rig,” said James Watt, Production Manager at Brown Note Productions. “The Sceptron structure behind the band was a fundamental project to figure out, especially to make it tour-friendly while getting them the look they wanted. They knew what they wanted, and we had to figure out how to pull it off realistically to make it easy to build every day.”

The LED grid behind the band is comprised of 120 VDO Sceptron 10 linear LED fixtures arranged in ten rows. The structure spans the entire stage, with a gentle curve that wraps around on each side. Behind the grid is a massive video screen displaying custom-made visuals. Throughout the show, the Sceptron fixtures alternate between displaying synchronized video content and contrasting lighting effects. The Sceptrons’ integrated power and data connectors make setup and teardown easy, maximizing efficiency for Brown Note’s crew.

“The thing I really like about the Sceptrons and the way we’re using them on this tour is that they can be used as a lighting fixture and a video fixture as well,” said Matthew.  “There are a few points in the show where we’re using the whole structure as one big light source, but we’re also running custom video content as well. You can get these really striking strobe looks out of it, and also have some really elegant textures and patterns going on as well.
“There are definitely a few points in the show where we like that layered look, occasionally you can’t really tell what’s Sceptron and what’s the LED screen. On this leg of the tour we have a fair amount of new video content from three sources; a company out of LA called Electronic Counter Measures, Tim Lovett from Melbourne, and Nic George.”

Matt also had 12 Martin MAC Vipers, six on the floor behind the Sceptron and six in the overhead truss, saying he always seems to return to the MAC Viper as they’re the best workhorse fixture and the gobos are really good and that he always misses the tracking of focus to the zoom when he uses other profile fixtures.

For control Matt ran an MA Lighting MA2 light with an MA2 full-size as backup. “For a show that is 90% timecode, I don’t need all of those faders or that extra screen,” commented Matt on using the MA2 light as the main console. “Programming this show was intensive, Brad Salt and I have been working on it for the past six months and when we did this slight redesign, we only spent a week in the Colourblind pre-viz suite. The band also came in for a few days which was awesome.”