You are here:
AustraliaCase Studies 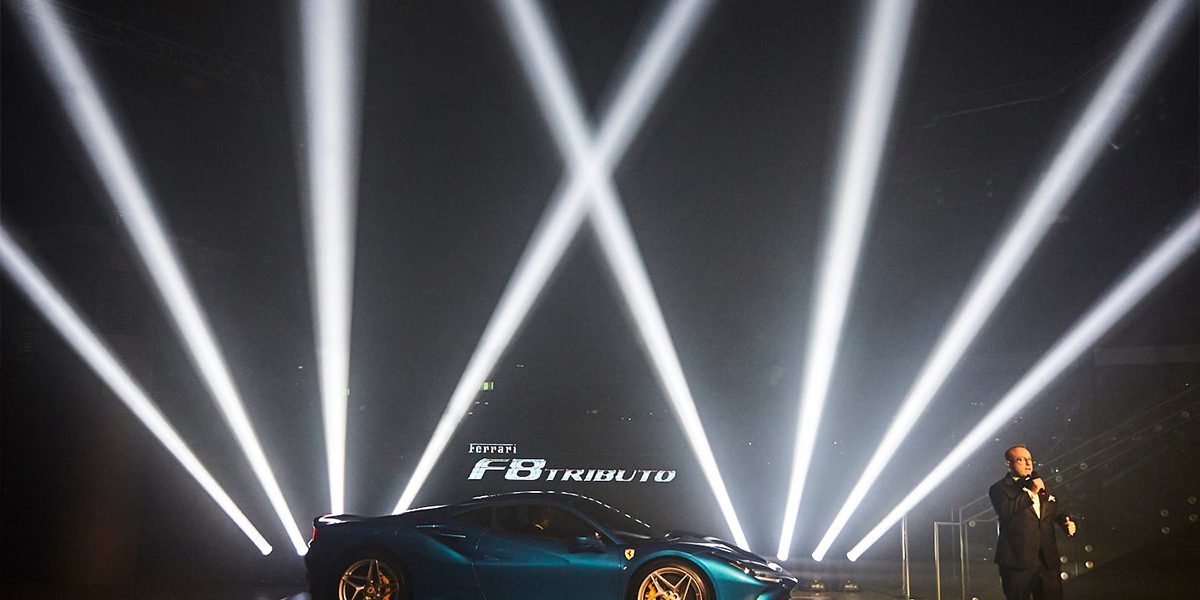 The Ferrari F8 Tributo was launched to the Australasian market on Wednesday 28th August at Sydney’s White Bay Cruise Terminal in Rozelle.

The event was designed and produced by the team at Flare Creative Experiences, with Fusion Entertainment providing the technical production elements for the black-tie event hosted by Ferrari Australasia.

Over 200 staff worked continuously across 36 hours to install and prepare for the event. The team put together 5.1 tonnes of rigging equipment, 6000 metres of cabling, 158 metres of black drape and 236 lights; creating a 348sqm staging structure that stood at 1.5m high.

Upon arriving at the venue, guests were wowed by a dozen Claypaky Sharpy Profiles alongside 12 x ShowPRO EX36 LED Wash fixtures heralding the event in spectacular style. A lone Claypaky Mythos 2 projected the unmistakable Ferrari logo onto the sandstone wall resulting in a stunning textured effect.

ShowPRO Fusion Bars were used to create a wall of light either side of the red carpet, closing off the space and directing the guests. Next was an amazing tunnel of Martin Sceptrons, supplied and built by Innovative Production Services, to the pre-show function area which was actually the 348sqm staging structure that stood at 1.5m high and was surrounded by black drapes.

A central bar was crowned by a massive floral arrangement intertwined with two circular trusses housing 18 x Martin MAC101 fixtures evenly spread around them. Arranged around the border of the stage area were eight Claypaky Axcor 400 Profiles and 15 x Martin MAC Auras.

“The Claypaky Axcor 400 is an amazing light,” commented Paul Walton, Fusion’s Technical Director for the event. “They’re very punchy and basically have all the features we need for an event like this. And of course, the MAC Auras are a staple fixture that we use pretty much on every job.”

In the pre-function area, guests were treated to a 5 minute, 20 second audiovisual spectacular culminating in the Ferrari F8 Tributo unveiled on screen. They were also shown featured archival footage from Ferrari’s historic vault, tracing the lineage of some of Ferrari’s most defining V8 vehicles.

The guests then realized they were on a stage and most surprisingly, the Ferrari F8 Tributo emerged from beneath that stage, moving through the low lying fog and lasers, past its predecessors and taking its position on the podium.

In this expansive space, more Claypaky Sharpys were positioned either side of the podium and a couple were used in the reveal moment with Oracle Laser’s Laser Sharpy attachment.

“We also used quite a few Claypaky Mythos in this area as it’s such a versatile fixture that allows us to do a wide range of effects,” added Paul. “We do find they perform a lot better now they have been upgraded to Mythos 2 but on this job, we were most impressed with how well the Ferrari logo projection looked with the output we achieved.”

Rounding up the Claypaky extravaganza – well, they are Italian legends too – were five Claypaky Stormy fixtures which provided a general wash in the area as well as a blinding strobe moments before the blackout when the kabuki dropped.
Enjoy the pictures below!