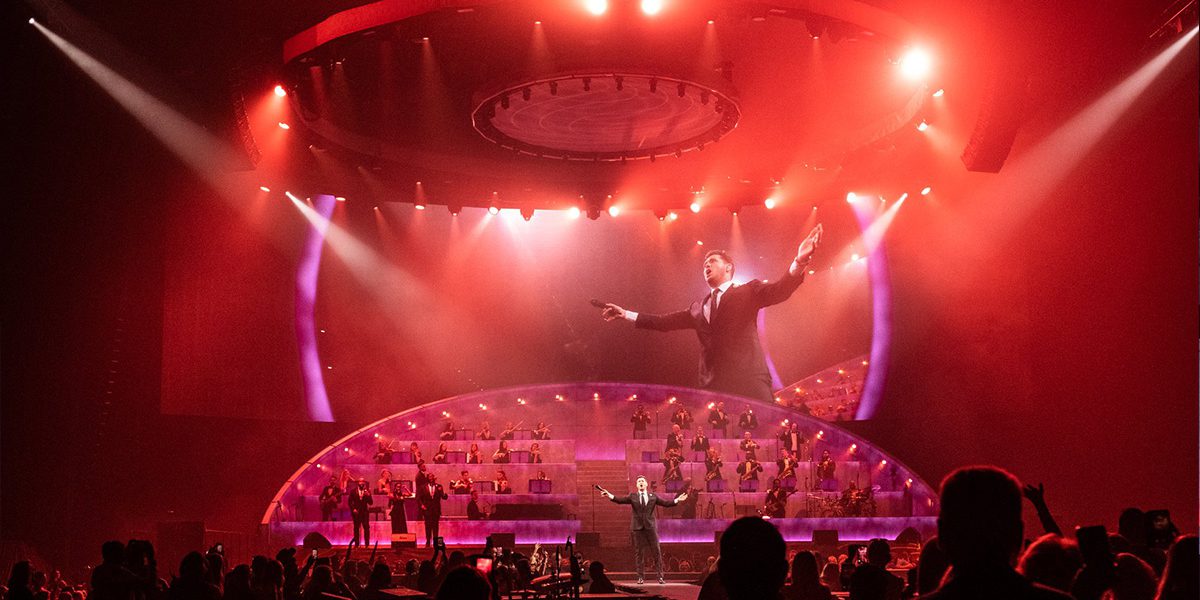 Michael Bublé’s world tour, An Evening With Michael Bublé, in celebration of his 10th studio album, is currently touring Australia.

The show has a ‘big band’ feel to it and the elegant set, designed by international entertainment architects, Stufish, provides a stylish backdrop for the Canadian crooner. “It’s all aimed to focus on the man and his music,” explains Bublé’s long-term show and lighting designer, Kurt Wagner, who has worked with Bublé for the past 14 years. “Michael likes a good production, but he is such a great entertainer and singer in his own right that we don’t need a lot of effects and distraction in the show. The design style is very much to paint a picture around him with some dramatic set pieces and, mainly, static lighting. Our aim is to create a beautiful frame that presents Michael back to his audiences in a production that puts the accent firmly on his music.”

The lines of the set are clean and sophisticated with cool, light grey colour tones and a brushed cement-type finish which, Wagner says, is ‘a great surface on which to paint with light and projection’. Central to the main set is an expansive elliptical area seating 38 musicians on four levels on either side of a central staircase, backed by a semi-circular wall that echoes the curves of the other set elements.

Into the upper section of this wall, Wagner has embedded 23 Ayrton MagicDot-SX fixtures. “The intent was to have some small lighting fixtures that could be built into the set and used to outline it and delineate its sweeping curves’” says Wagner. “The MagicDots have proved the perfect unit for this and given me a lot of flexibility in creating different looks to frame Michael.

“The nature of the show means we are aiming less at dynamic effects and more at creating a variety of beautiful static states as backdrops. I’ve therefore concentrated on using the MagicDots as filler and framing lights and they have given me many interesting options to create structure and fill in gaps between the height of the truss and the lower level lights.

“The zoom capability is one of the biggest features on this little fixture and it has impressed me the most. It has allowed me to work within the tight confines of the set which restricts their left-to-right movement a little, yet still use the zoom and colour functions to achieve a lot of different looks – more than I was expecting. Plus the colours are very rich and solid, especially for an LED source, so I am very happy.”

To extend the ‘frame’ further overhead, Wagner has added 18 more MagicDot-SX units in the upstage truss to increase the depth and add to the mid-air effects. “I am most impressed with the intensity of the MagicDot-SX which has a lot more punch than I expected, especially considering its diminutive size. The upstage lamps are trimmed at 48’ and the MagicDots still register well on stage. For the size of the fixture, it is very, very impressive.

“The main selling points for me were the combination of the MagicDot-SX’s size and output: they are small enough to fit into the set and very functional even within the restricted space; I was really happy with the zoom capability and there are not many lamps that would give me that punch at that size.”

The rig is controlled from a grandMA2 full-size console.