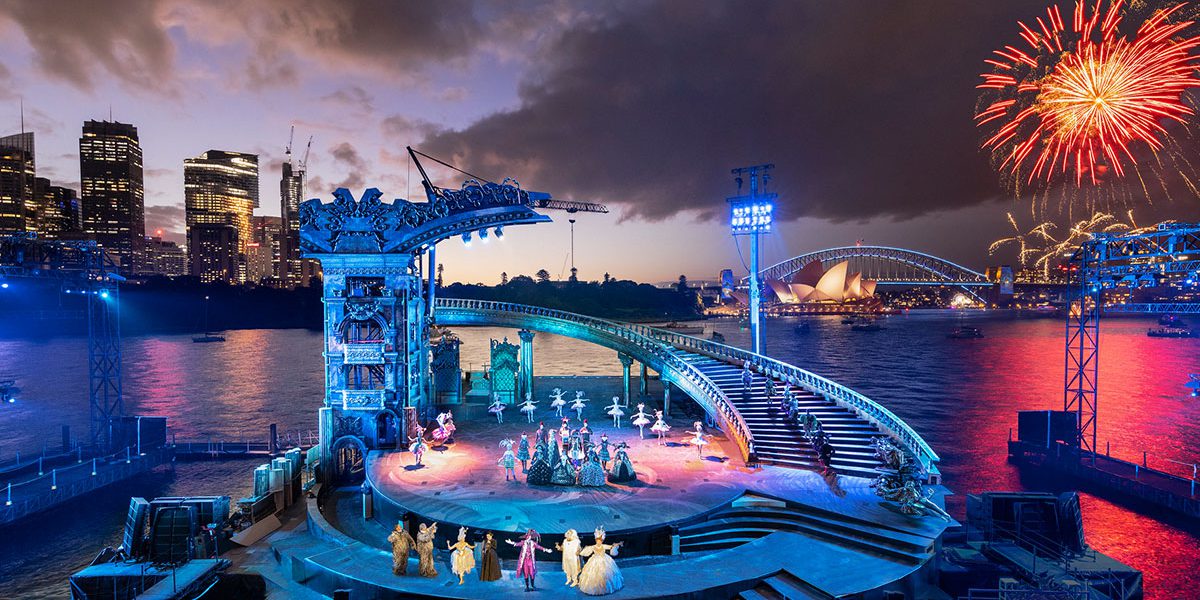 With Sydney experiencing its wettest summer on record the ambitious staging of this year’s Handa Opera on Sydney Harbour was always going to be interesting! On top of that, of the outdoor Handa Opera shows that have been staged on the harbour during its ten year history, this would have to be among the most ambitious and extravagant. And did we say the wettest?

This year a crowd pleaser was chosen resulting in an extravagant production of Andrew Lloyd Webber’s The Phantom of the Opera. The floating stage has a footprint double and a half the size of any other theatrical stage in the country and Gabriela Tylesova’s set features a tower of baroque theatre boxes topped with a sharp beak of broken proscenium plus a staircase sweeping across the backstage and down. Add all the moving parts, slippery slopes, special effects and an enormous chandelier held aloft by a crane, plus the inclement weather, and this is no easy production to light.

This was the first time lighting designer Nick Schlieper has lit the Handa Opera and by all accounts, it was quite a gruelling affair!

“No one was under any illusions as to how difficult lighting a show like Phantom would be under these circumstances,” commented Nick. “You just have to do your best in an extremely difficult situation.”

Lighting positions are limited with only a FOH tower plus two goalpost positions on the side. There are two cranes but you can only hang on the vertical section which means you’re hanging on a ladder that unfortunately blows around in the wind.

“After twelve nights of being onsite until dawn you are damp through and through, even though it hasn’t actually rained!” said Nick. “The moisture just pervades everything and I was reprinting my paperwork every day before I went in.”

Inherent moisture and torrential rainfall is an outdoor production’s worst nightmare but fortunately for Nick he had 52 x Ayrton Perseo-S in his rig.

The Ayrton Perseo-S is the first compact multi-function luminaire with an IP65 enclosure rating developed by Ayrton for intensive outdoor use. Feature rich as standard, with a wealth of effects and gobo options, and of course, 100% framing shutters, Perseo-S also boasts a subtractive CMY colour mixing system for perfect colour mixing, a variable CTO and a wheel with six complementary colours that combine to produce an infinite palette of vivid pastels and saturated colours.

Perseo-S produces a 27,000 lumen output from its 500W LED source which is calibrated at 8000K. Perseo-S has been designed to achieve an optimal resolution-to-performance-to-efficiency ratio with perfect image reproduction, a zoom range of 7° to 56°, no hotspot and significant improvement from distortion at wide angles.

“I have to say, they were everything everybody told me about them!” he remarked. “I had never used one before so I asked around and everyone who had said they were good. And they were very good.

They’re throwing a long, long way – it’s over 30 metres to centre stage from their side positions – and they’re making it!”

At the downstage end of the goalposts, Nick added two large ladders to house most of the Perseo-S and this became his basic FOH lighting rig.

“I like that the frost works in the Perseo-S, which is something you can’t say of a lot of moving lights, and the colour mixing is even across the beam!” added Nick. “There are still some MAC Viper Performance with 114 sticky tapped over the front of them at the back of the set. I can vouch for the fact that the Perseo-S keep going even during torrential downpours.”

Fifty Martin MAC Viper Performance were also in the rig and were under heavy assault from the rain that often was coming in at a 45° angle.

“There were several days when the poor guys running the stage began their day by opening up every single MAC Viper and drying them with a hairdryer,” said Nick. “I use the MAC Vipers as footlights, then there are five hanging off the staircase, some hung off the goalposts but most are in the proscenium tower. I also have 22 x ShowPRO Fusion QXV Strips to light the low smoke on the rare occasions it actually stays in the trough for the gondola!”

Eighteen Claypaky Sharpy Washes wearing their modesty rain hats are located on top of the crane whilst five Claypaky Scenius Unico are positioned on the FOH tower to throw some light onto the Passarella at the front of the stage.