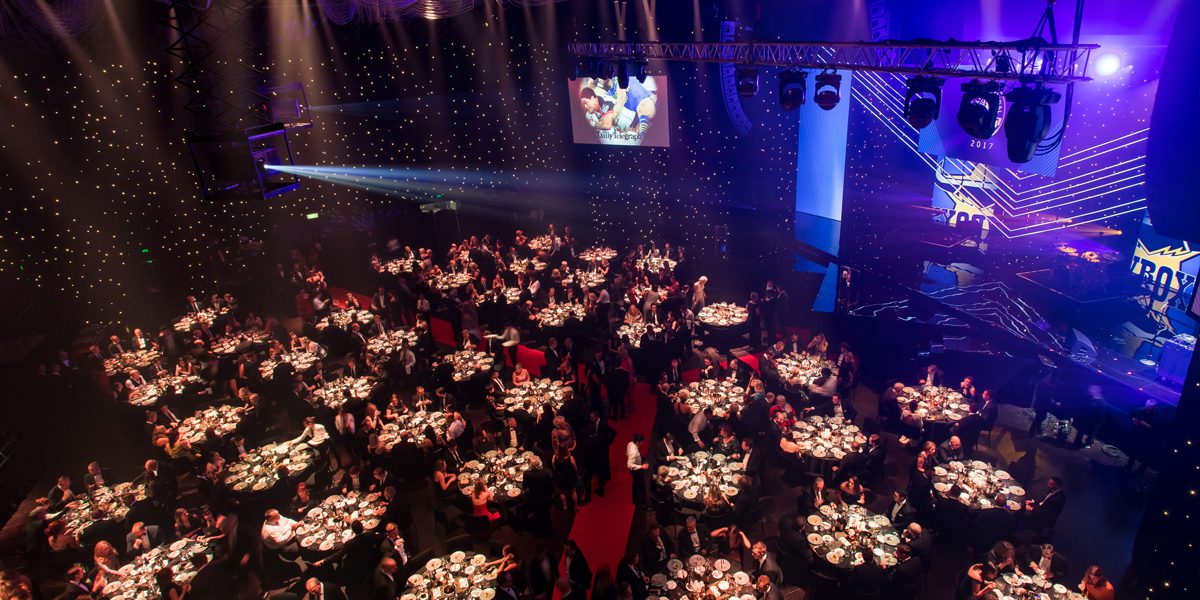 Rugby League’s night of nights, the Dally M Awards, was held at The Star in Sydney with Mandylights supplying the production and lighting design.
It’s a gig that Mandylights has successfully done for ten years yet every year they manage to create a fresh new look for the stage and room. Fortunately the in-house rig already boasts some amazing fixtures, including Claypaky Sharpy Washes and Super Sharpys, to which Mandylights added eight of the new Claypaky Scenius Unico.
The Scenius Unico is a magnificent spot light for projecting effects, with six rotating gobos, a rotating prism, a beautiful animation wheel, and it is equipped with the most sophisticated and most precise framing system on the market today. The Scenius Unico is also an excellent wash light, since it features a system with different diffusion filters, which may be inserted gradually. However the most amazing feature is that the Scenius Unico can also generate a powerful narrow beam of super concentrated light, with a minimum beam angle of only 5 degrees.
At the Dally M Awards, six Scenius Unico were placed on the front truss for key light with two more upstage for back light, in fact all of the gobo looks in the back of shot were created by these two Scenius Unicos.
The Scenius Unico delivered a superior quality of light and a consistent colour range, a bright output and enabled Mandylights to convey a wide variety of different looks.
“I was already in love with the Scenius fixtures and use them wherever I can,” remarked Richard Neville, managing director of Mandylights. “The great thing about the Unico is obviously having the shutters, but they also have a really good beam diffuser. It means you have the option of being able to pull all of the beam diffusion out and do your big aerial shots, then you can push them in and use them as key lights really beautifully. Their colour temperature correction is perfect, they have great colour temperature, and because you can put this beam diffuser in to create a perfectly flat field, it means that the cameras – and the Technical Directors – love them.”
With the Dally M Awards, Mandylights did not have the luxury of fixtures that were solely dedicated key lights and consequently the Unicos were an absolute lifesaver.
“They are such a versatile fixture,” added Richard. “We could use them as key lights when required, then whack all the diffusion out and point them out into the room for a big awards state. We love the rich colour palette the Unico offers, which is especially good for TV.”
Not only is the Scenius Unico a very powerful design tool, it’s also very cost-effective when you take into account the ratio of high light output to low power consumption.
Richard further noted that often when manufacturers create a profile fixture or what they term as a more theatrical fixture, the gobo wheels often suffer.
“The Scenius Unico has one gobo wheel of six rotating gobos instead of two wheels, but the gobos are extremely usable for concert and television, which is pretty rare – usually on fixtures that are marketed towards the theatre market get filled with less-than-desirable concert or live gobos” he said.
Control was a full size MA Lighting International MA2 for lighting and an MA2 light for media servers, operated by Richard Neville and Clint Dulieu.