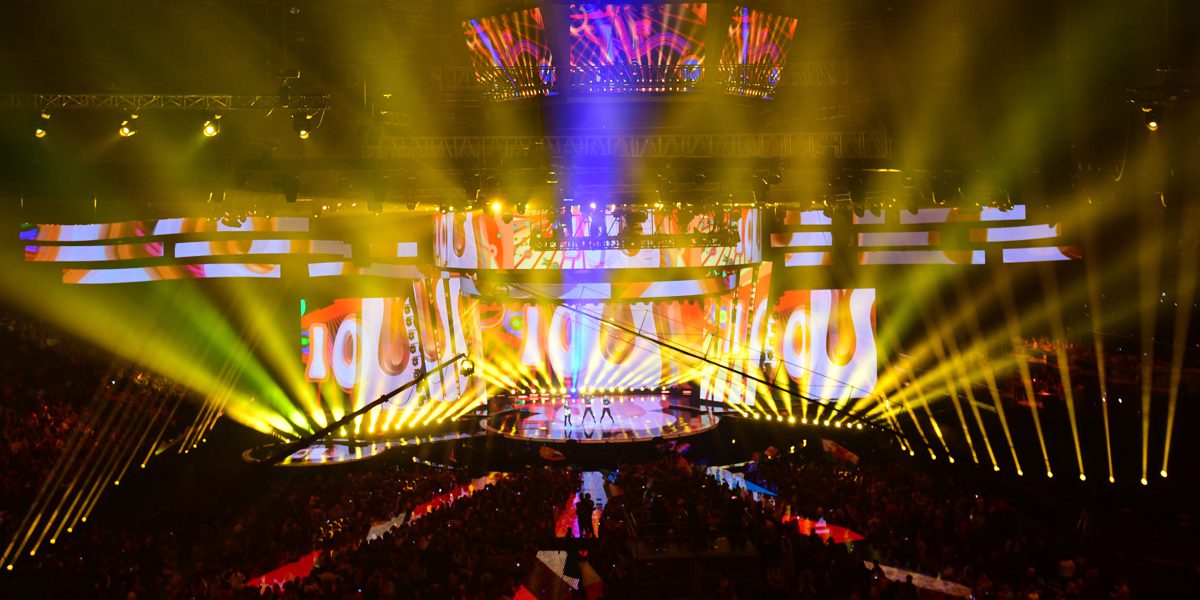 Minsk, Belarus – Over 840 Claypaky fixtures were used on the sixteenth Junior Eurovision Song Contest (JESC) final which was broadcast live from Minsk to more than 2.7 million viewers globally. The enormous production was skilfully orchestrated by Head of Production Ola Melzig with lighting designed by Alex Manzenko.

“We specify Claypaky products as they’re extremely reliable, and have an excellent output to power consumption and weight ratio,” explains Melzig. “The light-weight of the fixtures always benefits us. Although the Minsk Arena has a very good roof structure, it’s good to know the weight of the fixtures won’t restrict us in any way.”

Heavily laden with LED video walls and flooring, it’s imperative for any Eurovision Song Contest that the fixtures’ output stands out against the video content. Melzig says, “If we run the video screens too low, we will start to lose colour and contrast. It’s important that we use fixtures that stand out against them, to find a balance between lighting and video.”

Manzenko’s multi-role lighting was paramount to the production, creating an atmosphere for the 15,000 attendees in the arena, as well as manufacturing looks that would translate accurately for the millions watching the televised live final around the world.

“Our brief was to make a functional, yet beautiful lighting design in the hall and on television,” says Manzenko. “The Axcor Beam 300, Scenius Spot, Sharpy and B-EYEs helped me to create the atmosphere in the hall, while the Scenius Unico made it possible to get a high-quality picture on television due to the high CRI, and framing system.”

Manzenko used the Claypaky Axcor 600 Profile fixtures to highlight the audience in the back and on the sides of the arena. “We used the fixtures to expand the space and scale of the hall,” he says. We didn’t have to use all the parameters of the fixture because it was bright enough, but when we tested it we were able to increase the brightness of the fixture by 20% with the brightness boost feature. The CMY system in the new fixture has also become noticeably smoother, which is very important when lighting for television.

“Using the Claypaky fixtures makes it easier for me to create vastly different looks for each of the performers, of which there were more than 20 including the interval performance.”

The versatile A.leda B-EYE K20 which boasts a 4-60˚ zoom was rigged along the outline of the stage. Manzenko used the fixture for highly saturated washes to create a large stage space, as well as effective visuals by making the most of the 37 individual zones of control to create dynamic imagery.

“We used all of the features across the Claypaky fixtures, animation wheels, gobos, prisms, and frost devices, because without them it is often impossible to create the desired function both on the stage and in the hall,” Manzenko concludes.

Claypaky fixtures were supplied to JESC 2018 by Minsk-based rental and production house, Blackout Studio. Manager of Blackout Ilya Piatrouski says of the Axcor fixtures: “We’re really enthusiastic about the new line of Italian fixtures. We need powerful units that don’t have lamps to replace our old stock, and this is the solution. This equipment has received very good feedback from clients, and the products are answering the market’s demands.”

“The team at Blackout did such a great job. Thanks to manager Ilya Piatrouski and his fantastic team,” says Melzig.

The contest is produced each year by the European Broadcasting Union, in conjunction for 2018 with Belarusian Television & Radio Company. The slogan for this year’s contest was ‘light up’. JESC returned to the Minsk Arena in Belarus to host the largest edition of the contest to date, welcoming a record number of representatives from 20 countries.
ENDS