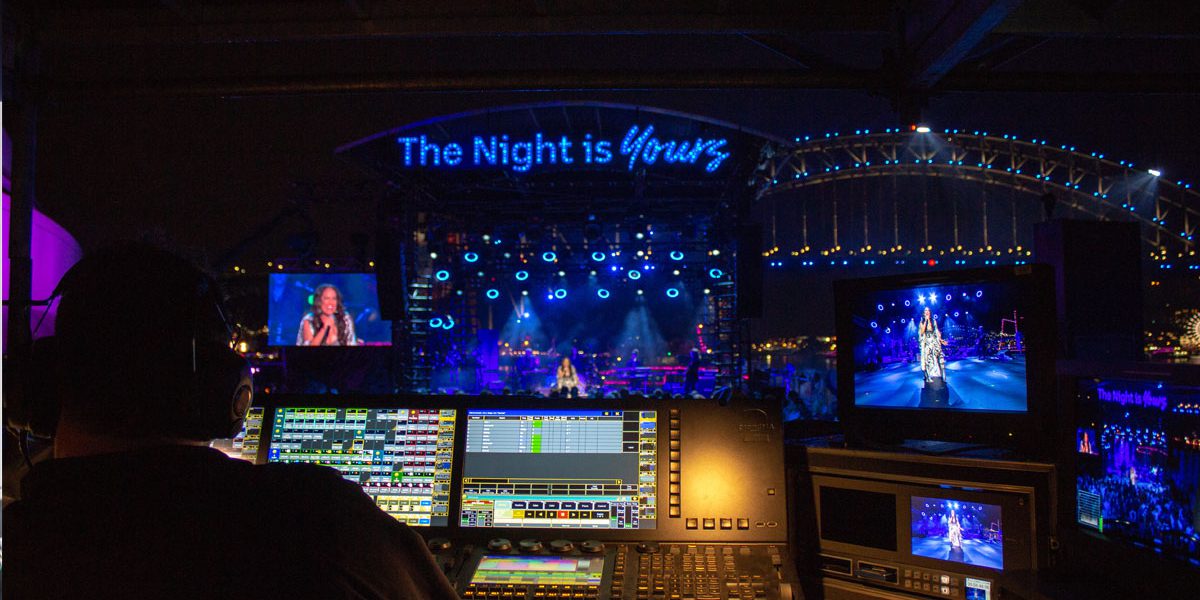 ABC ushered in 2019 with a star-studded concert on the Boardwalk of the Sydney Opera House. Australians around the country and people around the world tuned into the ABC to celebrate the biggest night of the year, New Year’s Eve. 3.6 million viewers partied the night away, tuning in to The Night is Yours concert, music, fun and fireworks.

From 9.30pm, Charlie Pickering and Zan Rowe ramped up the celebrations and dialed up the volume, presenting The Night is Yours live show featuring a star-studded line-up of artists performing songs from a playlist voted by the Australian people. Artists rocking the night included Tim Minchin, Ben Folds, Casey Donovan, Christine Anu, Client Liaison, Baker Boy and crowd favourite Daryl Braithwaite who led us up to midnight with the number one voted song…The Horses.

With millions of people watching the show live on television, iView or Social Media, lighting this event was a little nerve wracking for the Chameleon Touring Systems crew. No hiding from mistakes on this gig!

So, with power distribution at the heart of any modern event providing power to show-critical and highly valuable equipment, Chameleon rolled out their recently purchased StageSmarts smartPDU72 which sets a new standard in functionality, flexibility, reliability and safety.
Engineered to meet the tough requirements of the events market, the smartPDU Series helps you to keep track of the situation at any moment, protecting your connected equipment and crew and, when needed, assisting you in diagnosing problems.

“The smartPDUs were very easy to set up, plugged up like other racks but the back end of the system was a lot nicer due to their design,” commented Anthony Carlon, Chameleon’s Project Manager. “They are very clean and easy to use. The power monitor allows us to check voltages on all the 3 phases before we even turn the main breaker on.”

Anthony remarked that the status lights on each channel help with identifying problems straight away as they light up green when there is a load on the end of the line. If there is no load the LED status light does not turn on. Pressing that status LED also gave him a live read out of what that channel was currently drawing.

“Having individual RCDs on each channel helps a lot with outdoor events,” he continued. “If there was an issue with one fixture getting water in it due to rain, it would only trip that circuit and not a whole section of the rack. However, despite the heavy rain we didn’t have any issue with water anyway!” Anthony added that the backlit strips above each breaker makes it a lot easier to see in the dark and can help you quickly find the breaker you’re looking for …… very helpful for fixing and tech issues in the dark!

Lighting designer for the show was Hugh Taranto who wisely chose a rig that was mostly waterproof IP rated lights allowing them to stay operational through storms just before the show and intermittent showers during. These included the seventy ShowPro LED FusionBAR Q XV, forty of which were mounted on eight custom frames, Hex Pars and ProLights Panorama IP Wash. Also in the rig were Claypaky Mythos, Robert Juliat Victor followspots and Unique2 hazers.

“The new Panaroma Washes are fast becoming a favourite fixture,” said Hugh, who has also used them on Ninja Warrior and Game of Games. “They are quite versatile and the patterns on the fixture front and ring are very useful. The Mythos are still a fantastic hybrid light and allowed for a great variety of beam and spot FX through the night. The LED FusionBAR Q XVs were running in single pixel mode so we had 1050 individual pixels (4200dmx channels) of control. All of these fixtures allowed a wide variety of looks for the thirty plus songs performed in the show.”

Control was an MA Lighting grandMA2 full size with an MA2 light for backup and MA2 NPUs. Ziggy Ziegler who was the lighting designer for the bridge joined Hugh and the crew at the concert site to control the bridge lighting for the city and together, they were able to coordinate some special lighting moments.
Photos: Anthony Carlon
www.chameleon-touring.com.au