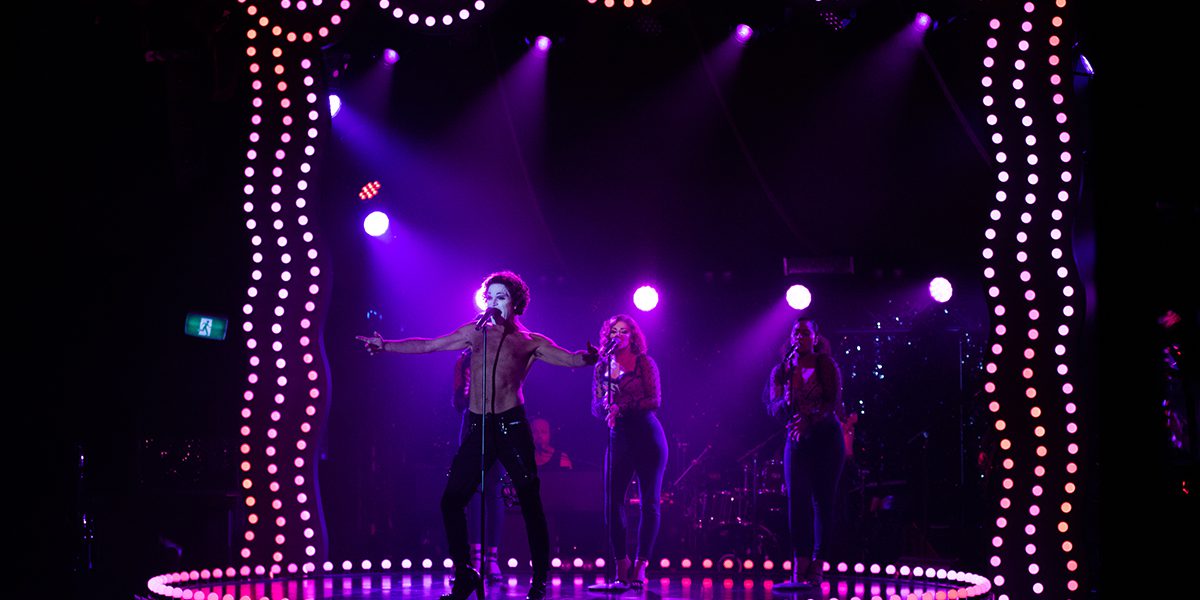 On 16 April 1975, a saucy hausfrau with a feather duster and a bare bottom stepped onto the stage of the Balmain Bijou and changed Australian theatre. Betty Blokk-Buster Follies was the talk of the town. The one-man show was hailed by The National Times as “the greatest thing since Rice Bubbles” and its creator, Reg Livermore, became a star.

Held in the Magic Mirrors Spiegeltent in Hyde Park, the show is directed by Craig Ilott, features a set by Brian Thomson and fabulous lighting by Trent Suidgeest using a Chameleon Touring Systems rig.

“I’m super-proud of this show, it’s my first time lighting in the Spiegeltent and I think we’ve made an unusual and exciting show in there,” commented Trent. “It’s a complicated little plot and with a set created of 600 RGB pixel festoon bulbs we’ve been able to get nice dynamic ideas.”

The main challenge for Trent and his team was that the show shares the venue and lighting rig with other shows, sometimes up to five different shows in one day, during the Sydney Festival and so he keeps an eye on the changeovers.

“I pushed hard to have quite a precise and specific design,” added Trent. “There are a number of songs with tight headshots; a floating head in space. With that is the added challenge of our fixtures coming in and out every day! Another challenge is that there are very few hanging positions in the tent so you need to think outside of the box in achieving many different states from limited positions.”

The tent basically has one large outer circle, a small inner truss circle, and some stage positions. There are plenty of Martin MAC Viper Profiles, MAC Auras and RUSH MH3 Beams throughout the venue as well as lots of mirrorballs. Most of the RUSH MH3 are positioned to blast the mirrorballs but Trent designed it so that four of the MH3 could easily swing onto the stage when required for big, punchy looks.

Seven ShowPRO Hex 16 Strips light up a highly textured, glittery curtain to the back of the stage and also silhouette the band when required. ShowPRO Hex IP Pars are scattered around the rig.

However, there is one fixture in Trent’s rig that he simply cannot stop raving about; the Claypaky Mini-B which, although it weighs just 7 Kg and measures only 34 cm, features the most advanced, modern optical and electronic technology.

Trent happily accepted the Mini-Bs as an upgraded substitution and they were a big surprise as his footlights on the circular stage! “One of my must-haves was a moving footlight, as I always knew footlight quality would be relied upon for our storytelling, and the Mini Bs became my favourites.

“Tony purchased six new Mini-Bs specifically for this production and they’re absolutely beautiful. They work really hard all night mounted on custom shelves on the side of our treads. I did that so I could decide their exact height once we were in the venue for sightlines over our festoon globes. I wanted them to be as discreet as possible whilst providing the necessary shots.

“The Mini-Bs can zoom right down to 4° to pinspot a head in the dark or they can zoom out to 55° and provide a great full-stage footlight. They are unbelievably bright, have brilliant colours, and they are very fast. We spin them around to do wonders on the mirrorballs, and occasional ballyhoo. They look so cute and neat on their little shelves and are a highlight of the design.”

The show embraces heaps of atmosphere including a Look Solution Tiny Fogger built onto the back of a prop sign that ‘explodes’, together with two Unique Hazers all onstage.

“This design has lots of unusual fixtures and ideas going on to support our strange and wonderful characters,” remarked Trent. “There is a real journey of light to support the monumental performance from Josh.”