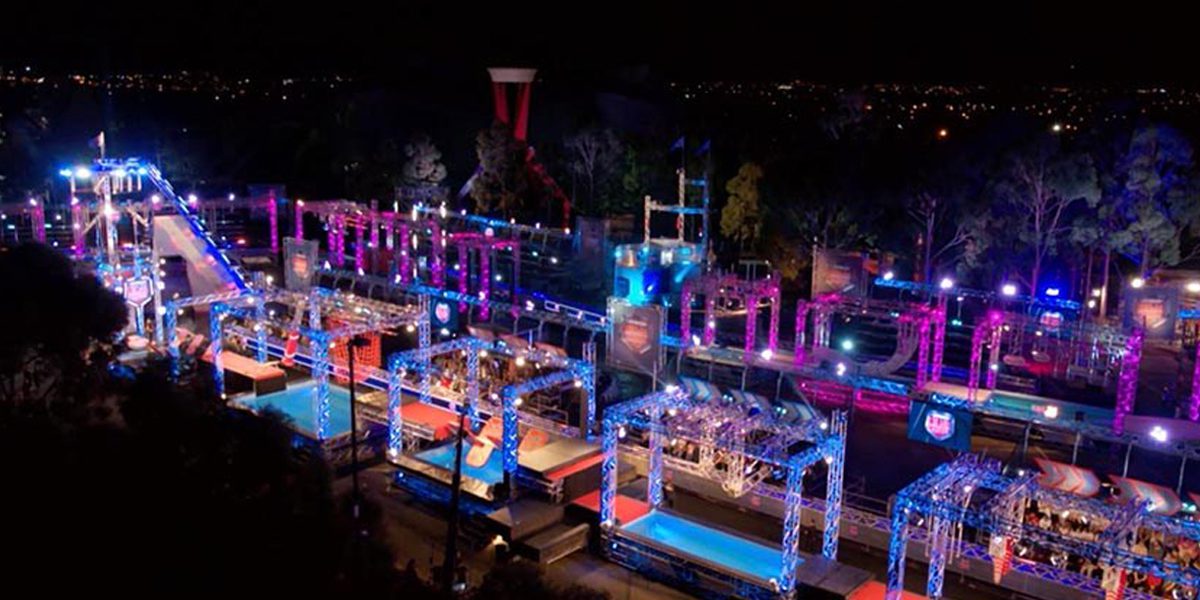 The fourth season of Australian Ninja Warrior heralded a new era with Ninjas coming face to face with mind-blowing new obstacles and for the first time, Ninja versus Ninja on the almighty Power Tower.

Filmed at Melbourne Showgrounds, the show was once again lit by Hugh Taranto with Chameleon Touring Systems supplying gear and crew. For the first time, Hugh had house power instead of generators and he relished working on a site set up for production.

Of course, Covid-19 reared its’ ugly head just as filming started but thorough planning and advice saw the production through. Being able to continue filming without an audience as well as outdoors, certainly helped.

“We were there for three weeks setting up and just as we were about to start recording, Covid-19 started to happen,” Hugh said. “There was a lot of making changes on the run. We started with a full audience but that was soon changed to just family and friends. As time went on and rules and protocols kept changing, we ended up with no audience towards the end. We were fortunate to be able to push through and finish the show.”

New this year was a fresh obstacle called the Power Tower, a large circular obstacle that was the last challenge and rather tricky to light. The structures ring was lit with ShowPRO Collider Strobes which sat around the top ring, 12m in the air.

As the show is held outdoors in the ever-changing Melbourne weather, Chameleon IP-rated fixtures were kept busy especially the 18 PROLIGHTS Panorama Wash FX and 12 Beam IP-rated fixtures which were located in the set as the primary movers. Added to that were six Martin MAC Vipers with rain hats.

“The Panoramas were a fantastic addition,” mentions Hugh. “We used the beams on Mt Midoriama and the washes were used around the course. In previous seasons we used indoor fixtures in these positions with rain protection and the IP rated lights allowed for a much better looking and useful solution. As well as the pixel FX in the Washes that we could use on the front face of the unit as eye-candy, they were extremely powerful as a wash light.”

As in previous years, the LED fixture count was massive; with so much visible shiny trussing, ShowPRO TrussMates were a must and a whopping 324 were installed.

Lighting up Mt Midoriyama in a deluge of colour were 32 x ShowPRO EX36 LED Floods located within the mountain to internally light the scaffolding. There were another 48 units around the course lighting scaffold and walls. Twelve ShowPRO Collider FC Strobes were placed around the outside of Mt Midoriyama from where they could accentuate the shape of the structure.
Also in Mt Midoriyama were 96 x Martin VDO Sceptron10 that go up and down the internal structure creating an impression of upwards movement as the competitors climb. A total of 96 x ShowPRO Fusion Bar XV are scattered over the set. They help accent the movement as Ninjas advance through the course with some used within the Chimney Climb for a sense of vertical movement.

Twelve little ShowPRO Hercules battery LEDs were on hand to be thrown into unforeseen situations.

“With the Hercules, we didn’t have to worry about where we’d power and data them from, we can just throw them in and instantly they are part of the show,” added Hugh.
This year, Hugh was asked to add some extra lighting interest into some of the obstacles and he did this by adding 56 x ShowPRO DreamPix Strips IP65 creating extra colour and movement to the course.

A key look to the show were the ShowPRO PixPads with 44 deployed around the site. Hugh commented that they required little waterproofing, with Chameleon designing a custom solution to protect the electronics at the back of the fixture and the front face happily taking all weather.

“The site has a huge amount of lights but within a few fixture types so we were able to repeat looks around the course,” said Hugh. “So no matter where you are on the course, it’s instantly recognizable where you are. There will always be PixPads and Panorama Washes in the background.”

However, the main light source on the set is the humble PAR can with almost 500 in play lighting the actual action and audience.

“As there’s so much structure and apparatus around the Ninjas, we decided to bring lights in close to them by mounting PARs on the apparatus itself,” explained Hugh. “We needed something fairly robust, weatherproof and able to take a lot of vibration punishment. Also, the silver PAR can enhance the look of the set with its’ silver truss set up.”

One Robert Juliat Victor follow spot was on standby in case a Ninja claimed Mt Midoryami – and this year for the first time one did!

Control was a couple of MA Lighting MA2 light, one run by Chad Spencer for the moving lights and LED fixtures and the other by Hugh for the white light and Catalyst screens. Distributed dimming and data systems were located within tents around the course, with fibre run to each of them where NPUs then distributed the data around.

“It’s a long build for this show although running the show itself is fairly simple as it’s a repetitive set up for us,” concluded Hugh. “We have a bit of a template and as I said, we use the same lights in the same sort of places. The setup period is huge and the lighting alone takes a couple of weeks. The shooting period is then another three weeks.”