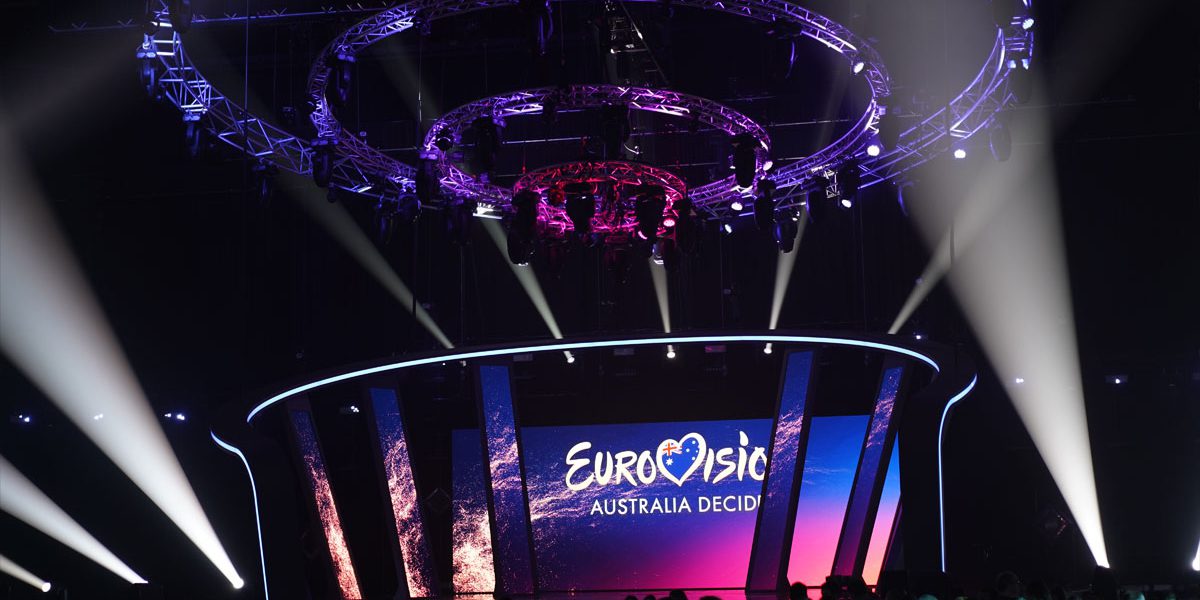 Eurovision – Australia Decides, produced by Blink TV for the SBS network, was held at the Gold Coast Convention and Exhibition Centre and was broadcast live to air.

As with anything Eurovison, it was all about the spectacle with lighting designer Paul Collison tasked with delivering a bold and bright show with a fraction of the 3000 fixtures we see on the Eurovision finals!

“It needed to be BIG,” confirmed PC. “Mark Dyson designed a beautiful set that was cosy for the performers, but allowed us to expand the scenic workspace well beyond just the stage. We created lighting positions all around the perimeter of the floor and added concentric rings of truss and light above the set. Then of course there’s the standard TV requirements of lighting the audience and creating an ambience out in the room.”

PC used the GCCEC’s in-house Claypaky Axcor 600 Profiles to augment the room lighting adding that he found them very impressive.

“We actually used them to light several host positions too, which I didn’t think we would be doing, and they were great,” said PC. “They were impressive not just as a light to light someone with, but also as an effects light delivering big, chunky beams of light to the room adding a lot of presence out in the audience.”

After the arrival of the budget police, PC admits that he had been concerned that he was lacking in fixtures to light the audience and room but the 24 x Claypaky Axcor 600 Profiles came to the rescue!

PC also utilised 18 x Claypaky Scenius Unicos which also delivered many big beams around the stage area as well as supplying a solution for some of the cross shots.

“When the jib moves in from a big wide room shot into the stage, you need something to maintain the structure of the picture and the Unicos did just that,” PC explained. “They always had a big presence when they were on and even with gobos and colour, they still held a significant presence. They’re a reliable fixture, they’re bright, they’re consistent and again, they’re a good fixture to light somebody with or use as a big aerial effect light.”

PC’s favourite light du jour is the Martin Encore, saying they are the first, proper LED fixture he feels comfortable lighting a face with in almost any situation.

“In fact the only thing better than an Encore would be a traditional incandescent lamp,” he noted. “The Encore’s high CRI and consistency from fixture to fixture is second to none. I was a little concerned that they may not be bright enough in an environment like this and that we may have had to resort to multiple fixtures to light a performer rather than the preferred single source. However the Encore CW did the job perfectly. We used them as both followspot sources, and also as hard keylights, which was great as you weren’t shifting colour temperatures and quality of light between different situations. We always had the same fixture lighting a face and the end result was fantastic, I couldn’t have been happier with the way all of the host positions and performers were lit across the show …. the Encores just do it so well.”

PC’s go-to wash light was the Martin MAC Aura and so he had 39 in his rig saying that the Aura-effect is very under-utilised by most people and when lighting for television, it is very handy to be able to light the face of a fitting without actually projecting any light.

“Then to be able to do strobe effects in different colours over the top of that is fantastic and no other wash light can do that, other than a MAC Quantum Wash,” added PC. “I’m surprised other manufacturers haven’t jumped on it as it’s such a handy feature in the broadcast world. Whenever I need to throw up something in great numbers that’s economical, the MAC Aura is the first thing that comes to mind.”

Also in PC’s rig were 30 x Martin MAC Viper Profile, which he describes as a standard work horse and that everything that can be said about the Viper, has already been said! They featured in almost every shot and every song, just doing their job.

Added to the rig were 50 x ShowPRO Collider FC Strobes and PC remarked that they provided variety and some great looks.

“Every fixture in the rig had to work hard and have a variety of effects or tricks that they could achieve, and the Colliders really offered us that and then some,” he said. “The desire to use the strobe with every cell on all the time wasn’t there for us as we preferred to use them in fine detail. Sometimes we’d just have a few pixels on to do a sparkly effect or we’d try an intense strobe effect with just the middle strip of LED, or we could light the full face of the Collider for a lot of light and really punchy effects. I was impressed by the variety of looks we managed to wrangle out of the Colliders and they are probably one of the best strobes on the market at the moment because you can get them in significant numbers and they’re very cost-effective. I also love that they are IP rated so you can throw them anywhere outdoors.”

FOH control was three MA Lighting grandMA3 lights and one grandMA3 full size, with a grandMA2 light used as a floor console, and five grandMA2 NPU.

“I wasn’t one of the main programmers on the show which afforded me the ability to look at the bigger picture rather than looking down at a console,” said PC. “Jared Donovan controlled moving lights, Stuart Anderson was the white light lighting director and Adam Smith looked after the media servers …. all on one homogenous MA network. We love the MA3 hardware, we love the MA ecosystem and wouldn’t even think for a second about using anything else.”

The backbone of the MA network ran on ELC’s new GBX Lan switches with GBx18 at front of house and a GBx10 on stage.

“It’s weird to say how much you love a switch, but I love these switches!” said PC. “They’re so easy to use and visual – with their coloured VLAN LED’s, it’s almost impossible to plug in to the wrong VLAN. Once we were set-up, they just did their job and we completely forgot about them.”

Chameleon Touring Systems supplied the majority of the gear with the GCCEC supplying the Claypaky Axcor 600 Profiles and the audience lighting fixtures.

“GCCEC played a significant role in allowing us to pull this show off and their crew and facilities were amazing,” concluded PC.