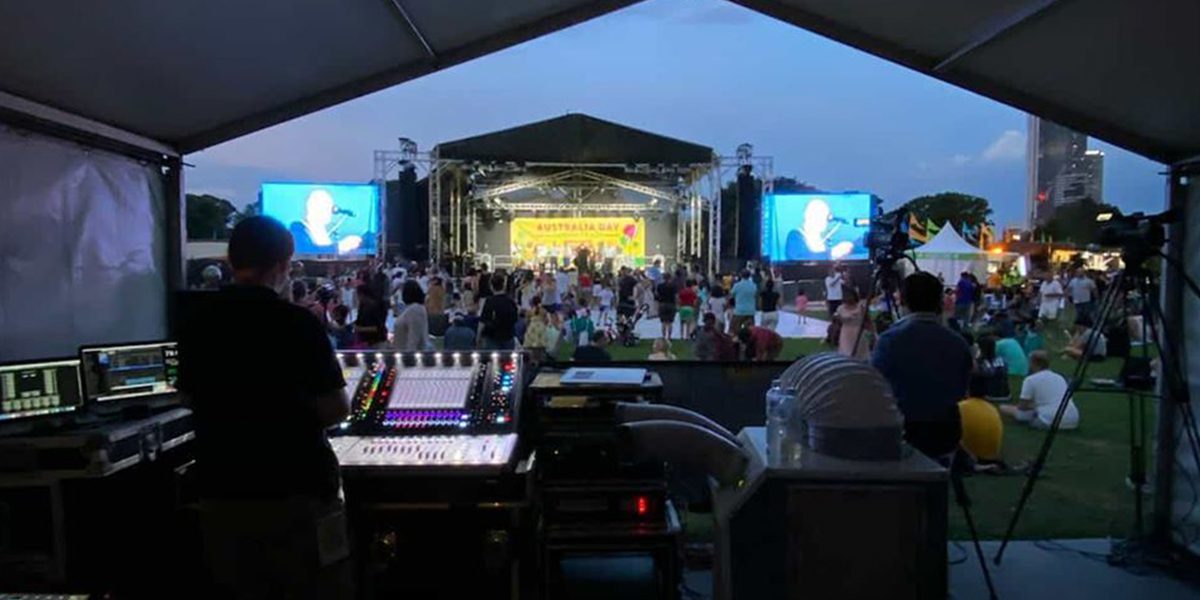 Jay Productions & Events supplied audio, staging, roof structure, backline and of course lighting, using the opportunity to showcase their new Claypaky Mini-B, the smallest LED moving light ever made by Claypaky for the professional market. Phillip had plenty of Claypaky firepower and versatility in the rig which included eight B-EYE K10, 12 Mythos, 12 Axcor 300 Spot and the sixteen Mini-Bs.

“We needed a rig that would give us eye-candy during the day and then transition into something that could provide big looks during the evening,” said Phillip Dearle, Jay’s Senior Project Manager.

“The B-EYE K10 was used for front wash and really punched through the daylight,” he added. “The Axcor 300 Spot was used as a floor package located between various set pieces such as drum kits and the Mythos, eight in the rig and four on the ground, provided some great action.”

The annual event fireworks display was cancelled due to the ongoing bushfire crisis, so the team placed eight Sharpy fixtures on the floor at the front of the stage for sky effects and the sixteen Mini-Bs were hung from the back truss for beam looks.

“We’ve built our inventory on Claypaky products and it’s great because they complement each other,” remarked Phillip. “For example, with the Axcors, I can use them as a floor package and they’ll keep up with everything else in the rig. We were looking for a very small fixture that we could throw onto any gig when fortunately the Mini-B became available.”

Jay Productions do many weddings so a small fixture that would be good for lighting tables was desirable but, at the same time, they needed a fixture that could be used on concerts and festivals. The Mini-B was perfect and so they purchased 32 of them!

“The Mini-Bs are great as a massive floor package, you can get nice wide beams out of them or solid straight beams,” said Phillip. “They really are a very versatile fixture for us.”

Six ShowPRO LED Blinders were located to the side of the stage to add depth whilst eight Ayrton MagicPanels also provided eye-candy during the daytime. Control was by a grandMA2 light console.