You are here:
AustraliaNews 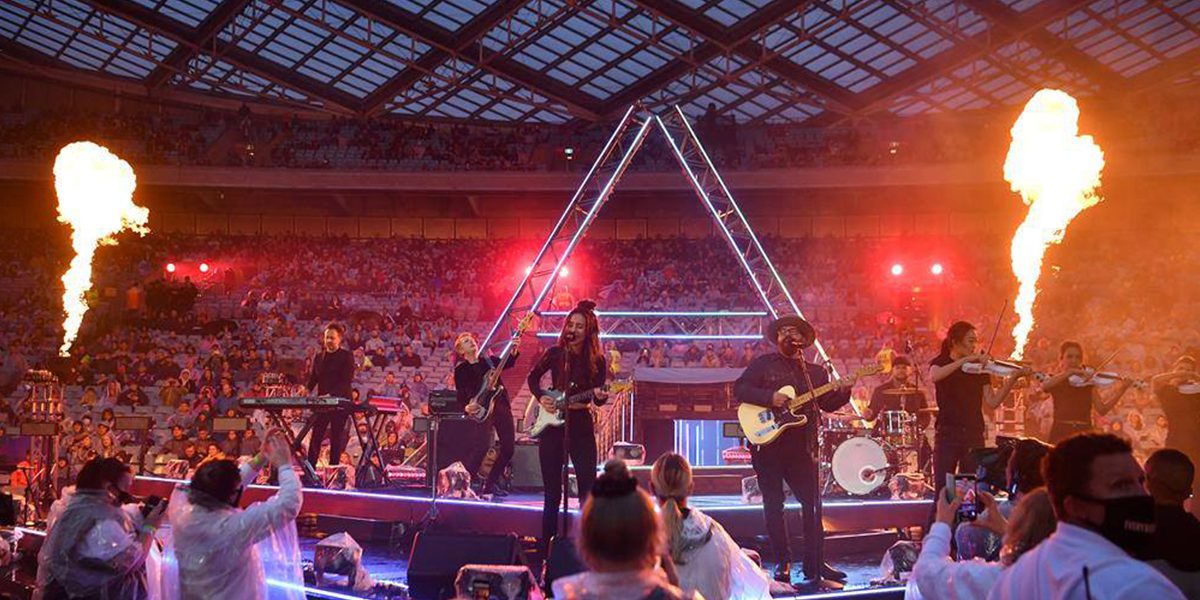 The 2020 NRL Grand Final, saw the Melbourne Storm defeat the Penrith Panthers at Sydney’s ANZ Stadium. Traditionally held on the first Sunday of October, the COVID-19 delay earlier in the year caused the date to be pushed back several weeks.

The pre-show entertainment was once again enriched by Tom Wright’s lighting and stage design with Chameleon Touring Systems supplying the equipment. This year Amy Shark walked onto the stage at ANZ Stadium in front of a 40,000-strong crowd to perform several of her biggest hits which have dominated the Australian charts over the past few years.

Unfortunately, as Tom lives in Melbourne, he was unable to attend the event and so Paul Collison and Dan Mercer worked closely with him to ensure his vision came to life. This was a task that ended up nearly impossible due to inclement weather that battered Sydney that weekend!

It was decided that Amy would enter the Stadium through the tunnel behind the stage and so Tom 70 IP rated ShowPRO DreamPix 1m LED Strips to dress the tunnel as well as add light. Added to the DreamPix onstage, including those that made up the massive ‘A’ structure, the total number was 148 and they were all run through Tom’s PRG Mbox media server.

“We made the assumption months ago that I probably would not be able to attend the event and that’s how I designed the show,” added Tom. “As well as PC, I had Dan as his associate so PC could be the arty guy and Dan could be the attack dog!! Basically, I wanted PC to focus on the console and look after the show file, update and program, whilst Dan ran around the Stadium fixing any issues.

“We knew the show would be programmed on an MA Lighting grandMA2 and originally PC was going to use his media server swapping over a couple of days before the event. It was going to be quite simple with essentially one video clip per song but then I added the 16 ShowPRO Colliders into the mix using the full-pixel mode which takes DMX to control the first four channels and ArtNet to control all of the cells. PC rightly suggested maybe I should just send him my Mbox dongle and it would run backstage controlling it all! It worked as soon as they plugged it in and I don’t believe they reprogrammed anything.”

PC’s schedule involved him arriving at the Stadium on the Thursday before the show after Dan had spent the day getting the show file up and running, Friday he concentrated on positions and colours but on Saturday the heavens opened and the massive deluge meant the all-important full rehearsal was cancelled.

“I had envisioned that PC would watch the full rehearsal with his designer’s eye and then change up to 40% of the show,” admitted Tom. “So, what was seen on Sunday night was actually my programming from the pre-vis. It was quite scary watching it on the television, from my sofa, at home!”

Some tough decisions had to be made on Saturday regarding the gear that was not waterproof. The front of the stage had 50 Martin MAC101s but they were cut an hour before the show began.

Eight Prolights IP Air Beams were located on wing trusses and plastic covers were placed over the six MAC Aura XBs, after their tilt was locked, which were also providing sidelight. The 27 ShowPRO LED Duet Blinders located onstage were plastic bagged. The three ClayPaky Mythos located behind the stage were waterproofed using a temporary roof. A further six Mythos were located at the south end of The Stadium on Level 1.

The 20 MAC Quantum Washes located on Level 1 of the Stadium were undercover, although the rain was so ferocious, they did get a little wet.

To ensure Amy was well lit for the television cameras Tom had four RJ 2.5K HMI Followspot on her the entire performance.

Tom’s design was built on the idea that he didn’t want moving black fixtures onstage with no real light coming out of them, especially as the show was performed at twilight this year rather than nighttime, preferring static colourful fixtures.

Tom wasn’t sure if the torrential rain would put a dampener on Amy’s show and the look and feel of the stage and lighting, but she showed what a trooper she was and delivered an excellent performance.