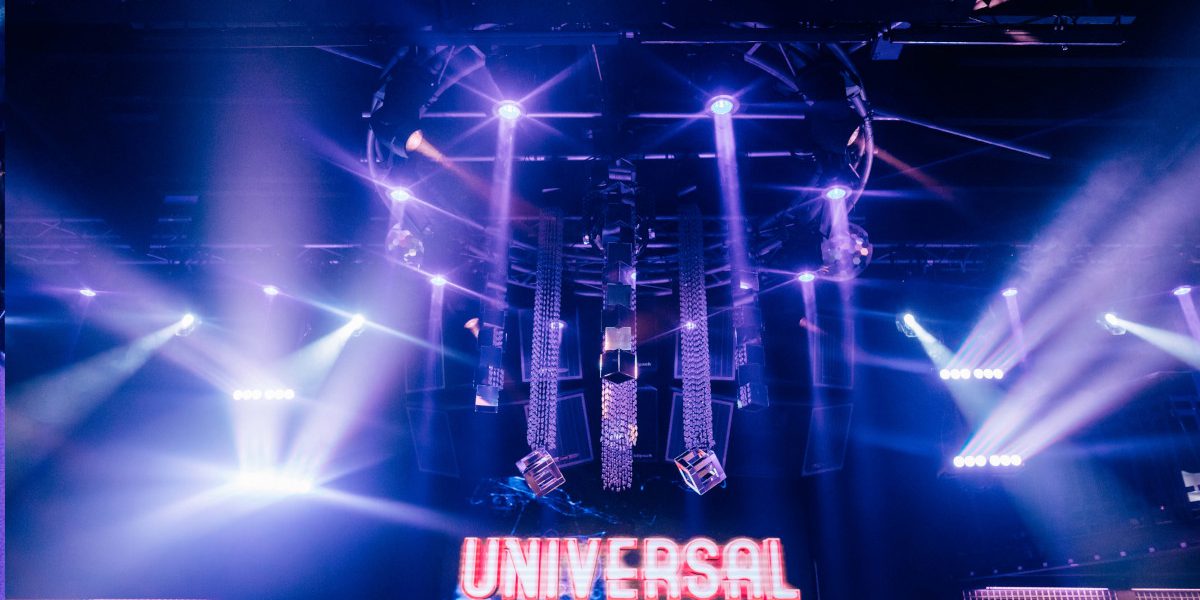 After its closure in 2017, Darlinghurst’s legendary gay venue Midnight Shift has been resurrected by Universal Hotels, a Sydney based hospitality group owned and operated by the Kospetas family.

Universal Hotels picked up the 1000-square-metre building last June for a reported $12 million and have relaunched it as Universal, a rebranded music venue and LGBTIQA+ safe place.

“Universal is an evolution of the Midnight Shift, rather than a revolution,” explained owner Jim Kospetas, who plans to respect the special role that the venue has played for the LGBTIQA+ community and continue its long-held legacy of inclusivity.

Jim, who is very tech savvy, contacted Show Technology with a brief that is music to the ear: lots and lots of fixtures! He wanted masses of beams and good sight lines throughout the venue.

Tim Macfie of TDM Productions was chosen to design the lighting system due to his long standing reputation within the clubbing world plus his understanding of the gay community, as well as the straight events held at the venue.

“They wanted someone who could meet the needs of all markets,” he explained. “As it’s a really tough time in Sydney for nightlife, we needed to look at ways to multifunction the space. Consequently it was crucial to bring the lighting up to a world class level from a production point of view.”

Tim was keen to create lines of symmetry in the room whilst keeping the three circular trusses that the Midnight Shift was known for. Hence the initial refurb saw the entire roof stripped out and a brand new mother grid installed. The truss circles were relocated within the venue and a new stage truss established.

Each of the three truss circles is ringed by eight Martin RUSH MH10 Beam FX, a compact and lightweight fixture with an independent, built-in LED ring. The LED ring offers the venue a range of new design opportunities, and the continuous pan and tilt also provides a number of interesting high-speed looks. These unique looking fixtures are certainly a talking point in the venue and Tim loves that they can spin a full 360 degrees without stopping.

“With 24 individually-controllable LEDs surrounding a central beam lens, the RUSH MH 10 FX offers us so many visual effect possibilities,” he said. “We added a further 14 x RUSH MH 10 FX located on trusses down the side of the venue. They really are an excellent choice for a range of creative applications.”

The venue is embellished by a myriad of mirror balls, mirror cubes and a DJ Box with a fascia of 1500 pieces of hand-cut mirror tiles – so lots of beam action was important to get the most out of the mirrors! Consequently each circular truss also houses four EK K4 LED Beam moving heads that produce tight, solid beams with 17 gobos and ultra-smooth pan/tilt movement. State-of-the-art LED and optics combine to deliver the coolest brightest beam of its size.

“The K4 LED Beams are very bright and have a very  fast pan/tilt rotation,” added Tim. “By adding them to the truss circles I got  the symmetry required for the mirror ball hits. We placed eight more down the side of the room to create a different perspective from mezzanine level..”

For a bit of flash, two Martin RUSH Strobe CWL were added to each truss circle with two more located on the bridges framed by mirror clusters. The versatility of these bright and compact LED linear strobes means they can deliver a single flash to a blinder effect, making them the perfect companion for the rest of Tim’s rig.

Tim’s design is targeted towards the centrepieces within the truss circles; each truss circle envelops an Ayrton CosmoPix-R, crystal bead chandeliers  and mirror cubes on the centre ring and additional mirror effects on the outer ring.. Tim worked closely with Peter Sykes from Psyklonic  in all the mirror ball creations and the pair of them decided to go one step further.

“As the CosmoPix-R is shaped like a mirrorball, we couldn’t resist turning it into one!” laughed Tim. “Once you start using your imagination you soon realize this light has a hundred different cool effects.

A total of 16 x Martin RUSH Scanner 1 LED fixtures create dramatic atmospheres and dynamic effects that boost the visual impact of the venue, while still keeping the original feel of Midnight Shift by keeping the retro scanner look. They run parallel down the sides of the room so that they can cover the entire dance floor.

At either end of the room are four PROLIGHTS STARKBAR1000 powerful and zoomable LED moving battens which can be used as a light curtain, CYC light or wash light. Each of the LED pixels are individually controllable for a host of impressive effects.

“I wasn’t sure about them at first but they can completely change the architecture of the room!” Tim said. “They marry really well with the mirror design and if you point them straight out they’re a good events blinder.”

Four PROLIGHTS AIR6PIX LED moving battens are located on four dropper bars either side of the DJ to frame LED screen with Tim saying they provide nice geometric elements. Again, each of the LED pixels are individually controllable, and both sides pivot to create classic ACL looks. With infinite rotation of both pan and tilt, they certainly add a wow factor to the lighting rig.

The balconies are dressed by four strings of Martin Exterior VC-Dot 4 (64 dots per string), a lightweight string of individually controllable, bright Dots which Tim says provide colour and depth to the room.

“They are strung around three-quarters of the room, adding a lovely colourful architectural element and as the night progresses they chase and strobe more and more,” he added. “They are a great way to multifunction the room; we used them for the Mardi Gras Awards event which had a specific colour branding and they really liked that we could carry through that colour in the architectural lighting. The VC-Dot 4s help us get away from a standard nightclub feel, to a more stylish and attractive room for the corporate market.”

Atmosphere is provided by a couple of Look Solutions Unique 2.1 Hazers chosen by Tim for their reliability – in fact he has them in all the venues he looks after.

Control is via an MA Lighting dot2 XL-B console which is essentially a dot2 core console with a dot2 B-wing built-in. This effectively adds another 48 button Executors to the original core package. The fact that the team at Universal are able to run this massive rig off a dot2 shows just how powerful this console really is. Truth is that with 3092 used channels out of the available 4096, they are utilising just over 6 full universes of DMX, making Universal’s dot2 XL-B the heaviest populated dot2 console in Australia, and one of the heaviest populated consoles in the world!

“It’s a privilege to see a high profile venue programming and operating the dot2 XL-B every week in Sydney,” commented Gareth Mealing, Show Technology’s NSW Technical Sales consultant. “With 405 individual fixtures patched into the console, it allows the programmers endless possibilities while pushing them to use the console and rig to its full potential.  It just goes to show this really is a powerful console and should not be underestimated.”

It was quite a journey to bring the sparkle, colour and glamour back to this iconic venue and Show Technology has enjoyed the project.

“The support from Show Technology has been incredible,” commented Tim. “Gareth is fantastic to work with and has given me great support.

With the new renovation, Universal has raised the standard of performance and production to a new level in Sydney.  The team has thought outside the box to add new design elements to existing fixtures which help tie the entire room design together to entice corporate events and high level performers back to Oxford Street.  Having recently re-opened the doors they have already had the privilege of hosting acts such as Ben Bohmer – Anjunadeep, Spencer Brown – Anjunadeep, Return to Rio, Hernan Cattano, James Ziebela, Marco Faraone and Solarstone.